A group of more than 20 hereditary chiefs and matriarchs in the Lax Kw'alaams First Nation is crying foul over an aboriginal leader whose battle against a B.C. liquefied natural gas project includes a lawsuit.

The group belonging to the Gitwilgyoots tribe of the Lax Kw'alaams is upset at Donald (Donnie) Wesley, alleging he doesn't have the authority to act on behalf of the tribe.

Mr. Wesley is a vocal critic of Pacific NorthWest LNG's proposal to build an $11.4-billion terminal on Lelu Island in the Port of Prince Rupert. He has garnered international attention for opposing the project, which is led by Malaysia's state-owned Petronas.

Mr. Wesley started a protest camp on Lelu Island in August, 2015, to raise environmental concerns over Pacific NorthWest LNG's contentious plans to construct a liquefaction terminal on the island.

His lawsuit in Federal Court names the respondents as the federal cabinet, the federal Environment Minister, the Canadian Environmental Assessment Agency and Pacific NorthWest LNG.

But in a recent affidavit filed in court, Carl Sampson Sr. said he is the head chief of the Gitwilgyoots tribe, alleging Mr. Wesley is improperly claiming to be head chief.

"Donald Wesley does not represent or speak for the Gitwilgyoots tribe or any members of the Blackfish clan," said Mr. Sampson, who has filed a motion to derail Mr. Wesley's quest to quash the federal Liberal cabinet's project approval last September.

"As Donald Wesley has no status to speak for anyone other than himself, we ask that his action be struck," said Mr. Sampson's filing, which is part of more than 20 affidavits submitted by Gitwilgyoots hereditary tribal chiefs and matriarchs.

"I request that I be added, on my behalf and on behalf of all the members of the Gitwilgyoots tribe, as a respondent with full party status in this and all related applications," said Mr. Sampson, who is represented by lawyer David Moonje.

In his response to Mr. Sampson in Federal Court, Mr. Wesley argues that he holds the rightful claim as a tribal chief under the title Yahaan.

"Yahaan was authorized to speak for the members of the Gitwilgyoots tribe at a November 1, 2008, feast in the Lax Kw'alaams village, at which he assumed the name Yahaan and, with it, he assumed the position of sm'oogit or head chief," according to the response filed last week by Mr. Wesley's lawyer, Richard Overstall.

In an affidavit, Mr. Wesley said he speaks for the Gitwilgyoots tribe under Tsimshian indigenous law, or Ayaawx.

Mr. Sampson, also known as hereditary chief Iyoo'ns, provides a litany of concerns. He alleges that Mr. Wesley's role as Yahaan contravenes Tsimshian law and disrespects matrilineal lineage. "According to our Ayaawx, Donald Wesley is not and cannot receive the name of Yahaan," Mr. Sampson said. "The name Yahaan belongs to Sarah Johnson's House of which Donald Wesley is not a part, also contrary to our Ayaawx."

Lax Kw'alaams Mayor John Helin, on behalf of the elected band council, has said he sees benefits in exporting LNG, as long as salmon habitat is protected. He has applied to be added as a respondent in the lawsuit launched by Mr. Wesley.

Mr. Wesley, Gitanyow hereditary chiefs and SkeenaWild Conservation Trust became the first three applicants last October to seek a court order that would quash the federal cabinet's approval of Pacific NorthWest LNG. Two Gitxsan hereditary chiefs said in January that they are joining the applications for a judicial review.

The B.C. government expects Pacific NorthWest LNG to decide this summer whether to forge ahead in the face of a global glut of LNG. A recent analysis by Sanford C. Bernstein & Co. forecasts that the Petronas-led consortium might give the green light in 2018 to begin construction, though other energy experts are skeptical about whether the project will ever be built. 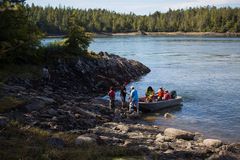 B.C. First Nation council set to debate LNG dock location
January 19, 2017
Christy Clark visits remote First Nation divided over Pacific NorthWest LNG project
January 18, 2017
Follow Brent Jang on Twitter @brentcjang
Report an error Editorial code of conduct
Due to technical reasons, we have temporarily removed commenting from our articles. We hope to have this fixed soon. Thank you for your patience. If you are looking to give feedback on our new site, please send it along to feedback@globeandmail.com. If you want to write a letter to the editor, please forward to letters@globeandmail.com.
Comments