Offers of legal help and church support have rallied dozens of homeless people who are camped at Victoria's law courts and say they are preparing for a standoff with British Columbia's government.

The campers held a news conference Monday at the campsite's entrance, announcing they will reject plans to break up a community that has become a home and a public example of the province's lack of affordable housing.

"We want to be visible, because out in the street you're invisible," said camp resident John Lafrance. "Here, together, we're visible."

The City of Victoria has been wrestling with the homeless issue since a 2008 court ruling allowed people to put up tents in city parks when shelters were full. The ruling permits homeless people to seek shelter in parks in the evenings, but the tents must be down at 7 a.m. the next morning.

The courthouse property, owned by the province, is not covered by the city bylaw.

B.C.'s Ministry of Technology, Innovation and Citizens' Services has sent a letter to the camp, citing health and safety concerns caused by the growing number of people at the site.

A 40-bed homeless shelter opened last week to take in some campers, but up to 100 people remain at the site, which has been steadily growing since last spring.

"We believe this is an effort to hide homelessness and not solve it," said camp supporter Ashley Mollison about the government actions.

She said the government is attempting to impose a one-size-fits-all solution without addressing the diverse needs of the camp, which is being called Super InTent City.

"We're here to speak out against the displacement of the Super InTent City residents," Ms. Mollison said.

She said the campers reject the letter that suggests they seek alternate shelter arrangements. But the campers are committed to negotiate "lasting, sustainable, meaningful solutions to end the housing crisis in Victoria."

The letter, delivered to the camp Friday, encouraged campers to work with outreach employees to find alternative shelter.

"While the province appreciates the complex issues facing campers at the site, a growing number of campers over the past month has created an increasing number of health and safety concerns, making the courthouse property not a viable location for campers," the letter stated.

A man died of a suspected drug overdose and another man was taken to hospital after a stabbing at the camp last month. Police caught the suspect in the stabbing incident after chasing him through the downtown neighbourhood.

Citizens' Services Minister Amrik Virk was not available for comment, but a ministry statement said the province continues to work with the city, police and community groups to help the courthouse campers.

Mr. Lafrance said many are preparing for long-term stays at the camp. He said the sight of homeless people camping in large numbers in public may be enough to spur governments to address homelessness issues.

"We're unified and we're going to stay here until someone shows us different who can help us," he said.

Victoria's Together Against Poverty Society said it has retained lawyers who are prepared to fight government eviction moves.

Victoria street preacher Rev. Al Tysick called on the city's faith community to pitch tents at the courthouse if evictions are issued.

"What I'm asking of the province is patience," he said. "We could break historic ground here."

Half of Downtown Eastside's homeless residents came from other areas: study
January 7, 2016 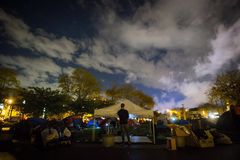 National homeless count to go ahead despite misgivings
January 6, 2016 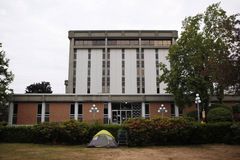