Homeless residents in Abbotsford, B.C., plan to sue the Fraser Valley city, and its police force, for what it says has been a campaign of harassment and discrimination against them.

Last month, Abbotsford Mayor Bruce Banman publicly apologized after city workers dumped chicken manure near a homeless encampment in an apparent effort to drive out its residents. Around the same time, police were accused of slashing the tents of homeless people and releasing bear spray on their belongings.

A group of homeless individuals decided to take legal action after a meeting this week. As of Wednesday, about 10 people had asked Pivot Legal Society to represent them in property damage claims, said lawyer D.J. Larkin.

Pivot will also represent another group, led by community outreach organization 5 and 2 Ministries on behalf of homeless people, in a human-rights complaint regarding harassment and discrimination. The complaint will focus more on seeking a "systemic solution," Ms. Larkin said.

"They are looking for a human rights tribunal to say, 'Yes, homeless people need to be respected and protected the same way anyone else is in the community.' "

"One client has come to us and said he had a tent that was about $700 – that's his home, that's where he lives – that was destroyed," Ms. Larkin said. "Another client indicated that he was asked to move along, because the city didn't want him sleeping where he was sleeping, and he agreed to move along. But while he was moving his belongings – he couldn't carry it all at once – the city came in and threw everything out."

Others allege police used bear spray on them and their belongings, Ms. Larkin said. They are all seeking monetary compensation.

The allegations surfaced in June, when 5 and 2 Ministries raised them in an Abbotsford social development advisory committee meeting. In response, the police department promptly contacted the Office of the Police Complaint Commissioner (OPCC) and launched its own internal investigation, which is continuing, said Abbotsford Police Constable Ian MacDonald.

"We took the allegations seriously in the first instance and that's why we asked for OPCC oversight," he said. "This is not a slight in any way [against] Pivot, but I think, in good faith, hopefully, the public will see that we took this issue seriously as soon as we heard it."

Last month, the city issued an apology amid public outrage for using chicken manure to disperse a homeless encampment.

City manager George Murray issued a statement apologizing and taking "full responsibility for the manner in which we dealt with this incident." Mayor Banman visited the site and told media he was "embarrassed, deeply ashamed and sorry for what happened" and that the city was reviewing how the decision was made.

The City of Abbotsford declined to comment on the matter on Tuesday.

"At this point, this is an ongoing legal issue," spokeswoman Rhonda Livingstone said in an e-mail.

Police-homeless tensions on the rise in Abbotsford
June 18, 2013
B.C. town apologizes after manure used to repel homeless people
June 6, 2013
Something had to be done about Abbotsford homeless, resident says
June 7, 2013 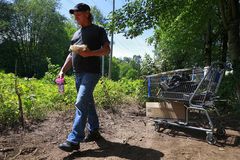