He was at university in Hong Kong in 1989 and recalls all of his classmates in front of TV sets as the protests grew larger, as the leaders refused to back down, as the Goddess of Democracy statue rose beneath the portrait of Mao. Some of his friends even flew to Beijing, where the burgeoning democracy movement was about to be crushed.

"I was literally one step away from getting on a plane," Mr. Chow said.

But Mr. Chow never went: he was worried he'd miss his exams. Like others who grew up among Hong Kong's skyscrapers, he worked hard and made his money. And like others in the former British colony, he eventually got on a plane to Canada – where many arrived seeking stability in the tense years before Britain's 1997 handover of Hong Kong back to China, continuing a historic flow of migration across the Pacific. Now, Mr. Chow is part of an influential community of Hong Kong-connected Canadian business people – in Toronto and Vancouver, but also in Hong Kong, where there are 300,000 Canadians and dual-citizens – who are watching the "Umbrella Revolution" from a unique vantage point, one that at least partly explains Canada's muted stand on the protests.

The demonstrations in Hong Kong have been the largest protests to hit China since Tiananmen. The protesters even erected a statue of a person holding out a yellow umbrella. But Mr. Chow – who co-founded a semiconductor chip company called ViXS and travels every couple of months back to Hong Kong, where the company has about 40 employees – is not alone as he hopes for a quick return to the profitable stability for which Hong Kong is renowned. Views differ, but many are cautious of being seen as anti-Beijing, of potentially ruining Hong Kong's reputation for freewheeling business, of rushing forward out of step with broader reforms on the mainland.

Mr. Chow and his diverse cohort – which includes famous Hong Kong-Canadians like Thomas Fung of the Fairchild empire, architect Bing Thom and others – were almost all born under British rule in Hong Kong. They recall the colony's governors being appointed in London, even as protests now centre on China's rather illiberal interpretation of "universal suffrage." Many other Hong Kong-Canadians profited from the exodus from Asia into Canada's property market, while others used Hong Kong as a springboard to benefit from the immense growth in China. Unlike the younger generation in Hong Kong, which has grated under the increased presence of mainland Chinese, the older, wealthier generation has gained substantially from closer ties to China. David Choi of Vancouver's Royal Pacific Realty jokes that people in Hong Kong are like people anywhere else: Democrats when they're young and Republicans when they're old. Plus, many have watched China's advances with awe, seen leaders' attempts to rein in corruption, and hope this development eventually leads to political evolution.

"I am hopeful that the system can be fine-tuned and maintained as it requires," Mr. Fung wrote to me in an e-mail arguing that democracy "is not a perfect cure for all nations," while acknowledging China's system, if left unreformed, can lead to corruption.

"We still need to walk with the pace of our parents," Benedict Leung, a Toronto accountant who frequently travels back to Hong Kong, told me separately.

People like Mr. Chow and Mr. Leung praise the peaceful nature of the protests and doubt Beijing will do anything foolhardy. They hope Hong Kong can return to normal. It is a practical hope, likely shared by many diplomats – who speak loudly in support of democracy elsewhere, such as Ukraine. But Mr. Choi still thinks there should be a dialogue that bridges business interests with the democratic aspirations of younger Hong Kong people, many of whom will carry the spirit of the protests with them for the rest of their lives.

Protests in Hong Kong revive hope in old-guard idealists
May 12, 2018 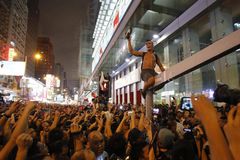