The elderly patient was lying on a stretcher in the emergency ward's waiting room, right under the television.

Adam Lund was trying to have a private conversation with his patient, who was near the end of life and had problems that had suddenly flared up. The doctor was acutely aware he was having this discussion in front of an audience.

"Everybody in the waiting room was sitting with their eyes on the television, trying to pretend that we were not doing patient-care right underneath them. They were either watching us do ER live or watching what was on television," he said Tuesday in an interview.

That's when he thought the overflow patients from the emergency room at New Westminster's Royal Columbian Hospital would be better off at the adjacent coffee shop.

Dr. Lund said he felt he had to do something to protect the patient's privacy and dignity. Two more patients were parked underneath the television in the waiting room. Others in the emergency ward were waiting for medications and treatments that had been ordered more than 90 minutes earlier. But no one could carry out the orders because the patients were not in a space where paramedics or nurses could do the work.

Dr. Lund said the decision was made in consultation with the emergency-room chart nurse, two emergency physician colleagues and paramedics.

Placing patients in the coffee shop area was not something that had ever been presented to emergency physicians as an option to deal with overcrowding, Dr. Lund said. "It was something idly talked about in the past and discarded, but last night we decided to try it."

B.C. Health Minister Colin Hansen said in an interview the coffee shop was designed to be used when emergency temporarily required more space. However, his staff later corrected the minister's statement, saying physicians can use any space adjacent to emergency for clinical reasons if they feel it is appropriate. But the coffee shop had not been specifically designed to handle emergency room overflow, the ministry staff member said.

The region, which is growing rapidly, needs more facilities, he added. The government has spent $7-billion over the past decade on health-care facilities and is expanding Surrey Memorial Hospital. Once completed in a few years, the Surrey hospital should take off some pressure from Royal Columbian Hospital, he said.

NDP health critic Sue Hammell said the use of the coffee shop for emergency patients raises concerns over so-called hallway medicine and whether inadequate government funding was compromising patient care. "I think it is outrageous. What are we coming to when we are serving up our health care in a fast food restaurant?" she said.

She linked the problem of overcrowding in the emergency room at Royal Columbia Hospital to an aggressive cutback program instituted by the B.C. Liberal government shortly after its election in 2001. Acute-care beds were shut down, the government never delivered on a promise of 5,000 long-term beds and plans to expand health-care facilities were frozen. The government also closed St Mary's Hospital in New Westminster, which was a community-based backup to Royal Columbian Hospital.

"The problems do not show up overnight," she said. "The problems of delay and cutbacks have shown up a number of years later."

Dr. Lund said overcrowding in the emergency ward at Royal Columbian Hospital is so routine that the hospital has non-medical staff called "emergency-room attendants" help out with patients on stretchers scattered around the nursing station. On Monday night, so many people showed up at emergency that the stretchers were "double parked in the hallways," he said.

Hospital staff moved into the coffee shop shortly after it closed at 9:30 p.m. They pulled down the blinds and put up privacy screens. Consolidating patients in the space enabled two paramedic crews to return to the street. Administrators subsequently found a way to move some patients to a ward, freeing up space in the emergency room, "probably, partly, as a result of us doing this," Dr. Lund said.

"I think it was a good decision," Dr. Lund said. "We were able to move patients who were in a totally inappropriate space." 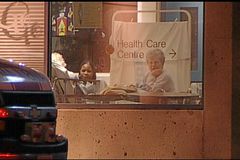