Before Ms. Clark became B.C. Premier in February, she often delighted in putting politicians on the hot seat during her afternoon time slot. Her inquisitions were often so hard-hitting, listeners felt sorry for the poor elected official on the other side of the microphone.

Were she still sitting in her host's chair today, it's difficult to imagine Ms. Clark accepting now-Premier Clark's excuse that's she's "too busy running the province" to participate in an all-candidates debate in the by-election in which she is running.

Ms. Clark has done a number of commendable things in the short time she has been Premier. Her populist instincts, no doubt honed during her time in radio, are exceptional. And she has surrounded herself with a team of advisers that has demonstrated an undeniable adeptness in pushing the right buttons.

But the Premier's decision not to enter at least one all-candidates debate does not reflect well on her. In fact, it's a position that demonstrates a fair amount of contempt for the Point Grey voter.

No space in her schedule for a two-hour debate? Really? But she does have time to throw on an apron and pretend to be a waitress for a couple of hours? This, we're told, so the Premier could "spend a bit of time walking in someone else's shoes."

It was a cynical and crass publicity stunt designed to draw attention to the government's decision to raise the minimum wage - a move for which Ms. Clark deserves full credit. It should have happened a long time ago under the Liberals. She didn't need to sully a good public policy decision with a blindingly transparent, carefully orchestrated photo-op purely intended to accrue positive publicity.

The Premier has no more appreciation now of the life of a person living on minimum wage than she did before she and her political strategists decided it might be good for her numbers if she served coffee for a couple of hours in a diner. Ms. Clark makes nearly $200,000 a year, plus benefits most people can only dream of. Spend a year on minimum wage, Premier, and your fact-finding mission might not look quite as patronizing.

But back to the debate.

By now, Christy Clark the radio host would have asked Premier Clark what she is afraid of? Why she is refusing to put her candidacy up to the scrutiny of an all-candidates debate? Especially given that the Premier campaigned during the Liberal leadership race on a promise to be more open and transparent. What does she have to lose?

The answer is more than the other guys.

That is why Ms. Clark is not debating; because she has more to lose than anyone else in the debate, especially NDP candidate David Eby. She would inevitably be asked questions that would be uncomfortable. (About her connections to the BC Rail scandal, perhaps.) Plus, a debate would only serve to give Mr. Eby publicity that he is having trouble generating on his own. So why give him that platform?

The answer is because it's the right thing to do. When you run in an election, you are expected to field questions from your opponents. It is a crucial test of your candidacy. It is practically a fundamental tenet of our democratic system. You don't say you don't have time because you're the Premier. If you can't find two hours in your schedule to attend an all-candidates meeting, how do you expect to represent the riding once you're elected?

I think those are all questions Ms. Clark would have asked during her radio days.

To this point, the Premier has received little grief from her former colleagues in the media for the stand she's taken. So she's probably not concerned about the issue hurting her chances of winning.

She has mostly been spending her time being out front of a number of popular and populist announcements that we're likely to see plenty more of in the coming months. Her recent decision to cancel parking fees in parks, while not a huge deal, was smart. As was her edict to cancel controversial rate hikes being planned by BC Hydro.

There is almost certainly an election coming this fall, so it should be all good news, all the time until then.

At this point, it's uncertain in whose shoes the Premier intends to walk next - as she's promised. Maybe she'll slip out of her power suit and high heels to become a homeless person for an hour.

And then afterward she can meet her friends at the Four Seasons for dinner and tell them all about it.

new
Clark considers ways to lighten the impact of the HST
May 5, 2011 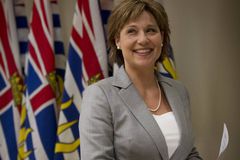 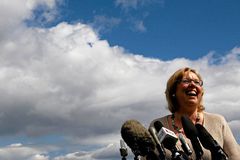 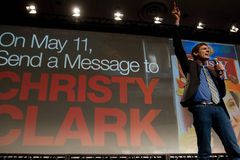 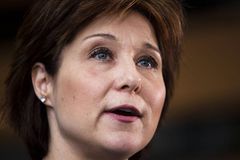