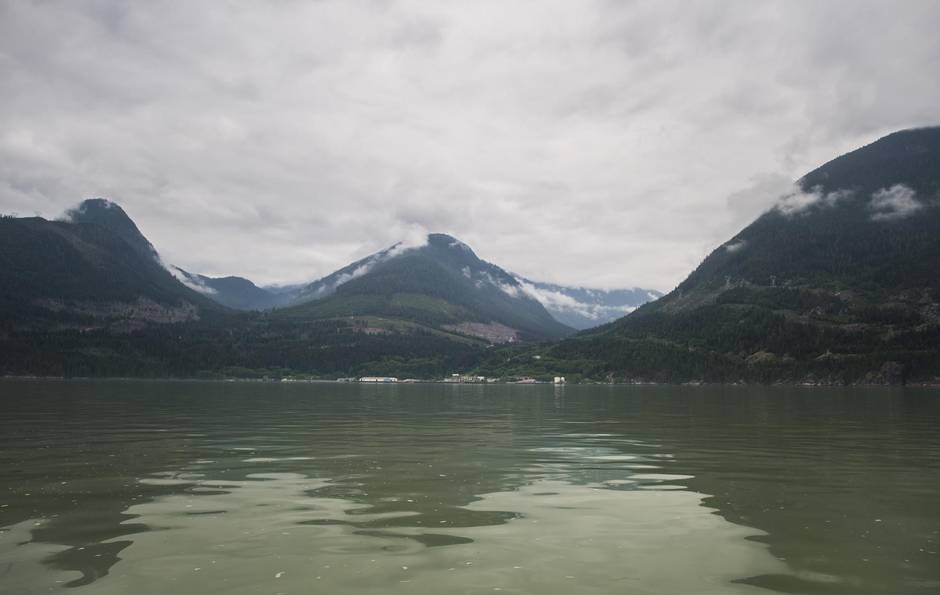 The proposed location of the Woodfibre LNG facility near Squamish. (John Lehmann/The Globe and Mail)


A series of major projects in B.C.'s pristine Howe Sound is pitting the promise of jobs and economic growth against environmental fears. Mark Hume reports


Creeping along the base of a cliff in his small open boat John Buchanan is metres from the rock face, peering at a narrow band of bladderwrack kelp just revealed by low tide.

“You have to get really close,” says Mr. Buchanan, a train car mechanic and former pulp mill worker who over the past few years has documented some remarkable environmental events in Howe Sound. “People think I’m crazy because I’m 10 feet from shore and I’ve got my binoculars out.”

At times the boat bumps against the shore and he reaches out to turn over the dripping fronds of kelp. He’s looking for herring eggs, tiny silver specs that signal an ecological revival in Howe Sound that is raising both hopes and fears about the future of the area.

The pace of change

Seven major projects are proposed for the Howe Sound region:

The $1.6-billion project on the site of an old pulp mill would create 650 construction jobs for two years and 100 full-time jobs. It is currently under environmental assessment.

The proposal is to incinerate about 370,000 tonnes of Metro Vancouver garbage annually. The $500-million plant would be located on Squamish First Nation lands at Port Mellon. It has been short-listed by Metro Vancouver but a final selection has not yet been made.

The $60-million proposal would mine more than one million tonnes of sand and gravel per year from glacial deposits near McNab Creek, a salmon-spawning stream. It’s in a preliminary stage of environmental assessment.

FortisBC has proposed a 52-km long, $520-million pipeline linking to the proposed Woodfibre LNG project. The project is currently under environmental assessment.

The $5.2-billion project proposes a new ski resort for Brohm Ridge in the Cheakamus River watershed. It would include 23 ski lifts and 1,675 hotel units. Currently under environmental assessment.

The $1-billion development near Britannia Beach would see 3,000 new homes and an estimated 8,000 new residents. Provincial environmental assessment not required.

A Squamish Nation and Concord Pacific partnership proposes 1,400 new homes in a master-planned community. Cost of the Porteau Cove project was not immediately available. Provincial environmental assessment not required.

Seven major projects worth an estimated $9 billion – including an LNG facility, a gravel mine, an industrial waste energy plant, a ski resort, and housing developments for an estimated 10,000 new residents – are proposed on the shores of Howe Sound.

For development proponents the area is ideal, with improved highway access and deep water passage for tankers. And unlike in pristine areas of B.C. it bears the scars of past industrial developments. While the projects offer the prospect of renewed economic growth there has been a dramatic demographic shift over the years and now the promise of jobs is increasingly being weighed against questions of environmental risk.

Mr. Buchanan said that when he was growing up in Squamish, a former mill town where logging trucks once left the main street constantly mired in mud, “you didn’t dare talk about protecting the environment for fear you’d get beaten.”

But times have changed. Now mountain bikes outnumber logging trucks and the waters near Squamish see more sail boards than tugs pulling log booms. City council there has expressed opposition to the proposed LNG project as have the village of Lion’s Bay and the town of Gibsons.

Some 19 LNG projects have been proposed in B.C., and the government has set a goal of having three facilities in operation by 2020. But First Nation support has been elusive, with the Lax Kw’alaams Band recently rejecting a project near Prince Rupert. The Squamish First Nation is expected to announce its position on the proposed Howe Sound LNG plant in June.

Many are saying that with Howe Sound now recovering from decades of industrial pollution, it should become a provincial recreation area. Such a designation would reserve Crown land for public recreational use but allow government greater flexibility than a park in permitting development. That would turn the inlet on Metro Vancouver’s doorstep into something like the Golden Gate National Recreation Area, a reserve that surrounds San Francisco Bay and draws 20 million visitors a year. 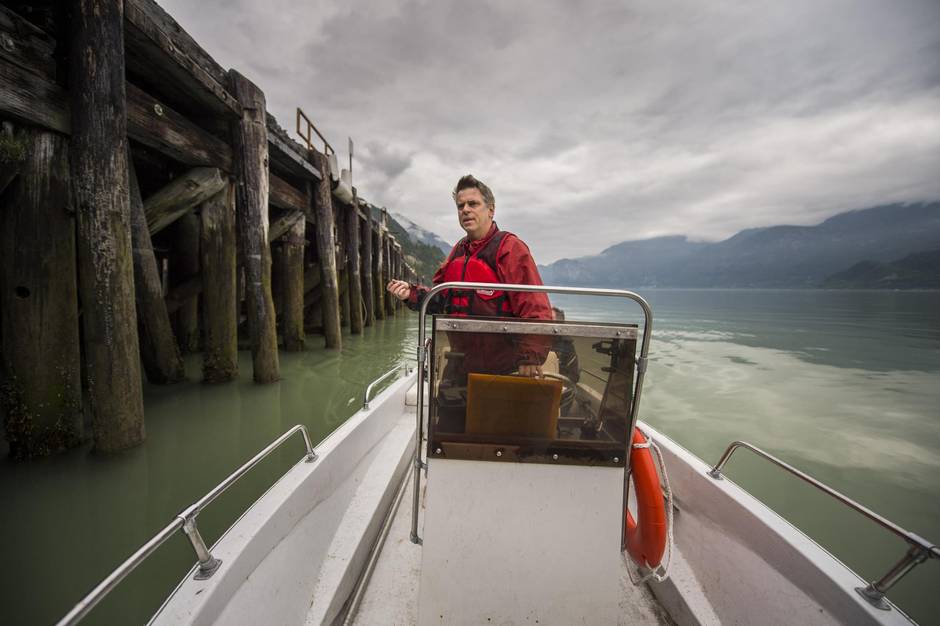 John Buchanan at Woodfibre, where the proposed LNG site would be near Squamish. (John Lehmann/The Globe and Mail)

Fifty years ago Howe Sound, which is laid out like a tapestry of forested green islands and pale blue water beneath the Sea to Sky Highway, was a critically damaged ecosystem. Dioxins and furans had been pouring into the inlet from two big pulp mills; Britannia Mine spewed copper and acidic drainage, and a chemical plant in Squamish had spilled tonnes of mercury into the ocean.

By the early sixties, whales had long vanished, herring were down to a few remnant schools, crab and prawn fisheries were closed for health reasons, runs of salmon were in drastic decline and even the seaweed was dying along the shore.

Then a slow but dramatic change began – building to what one marine scientist now calls an environmental “resurrection.” 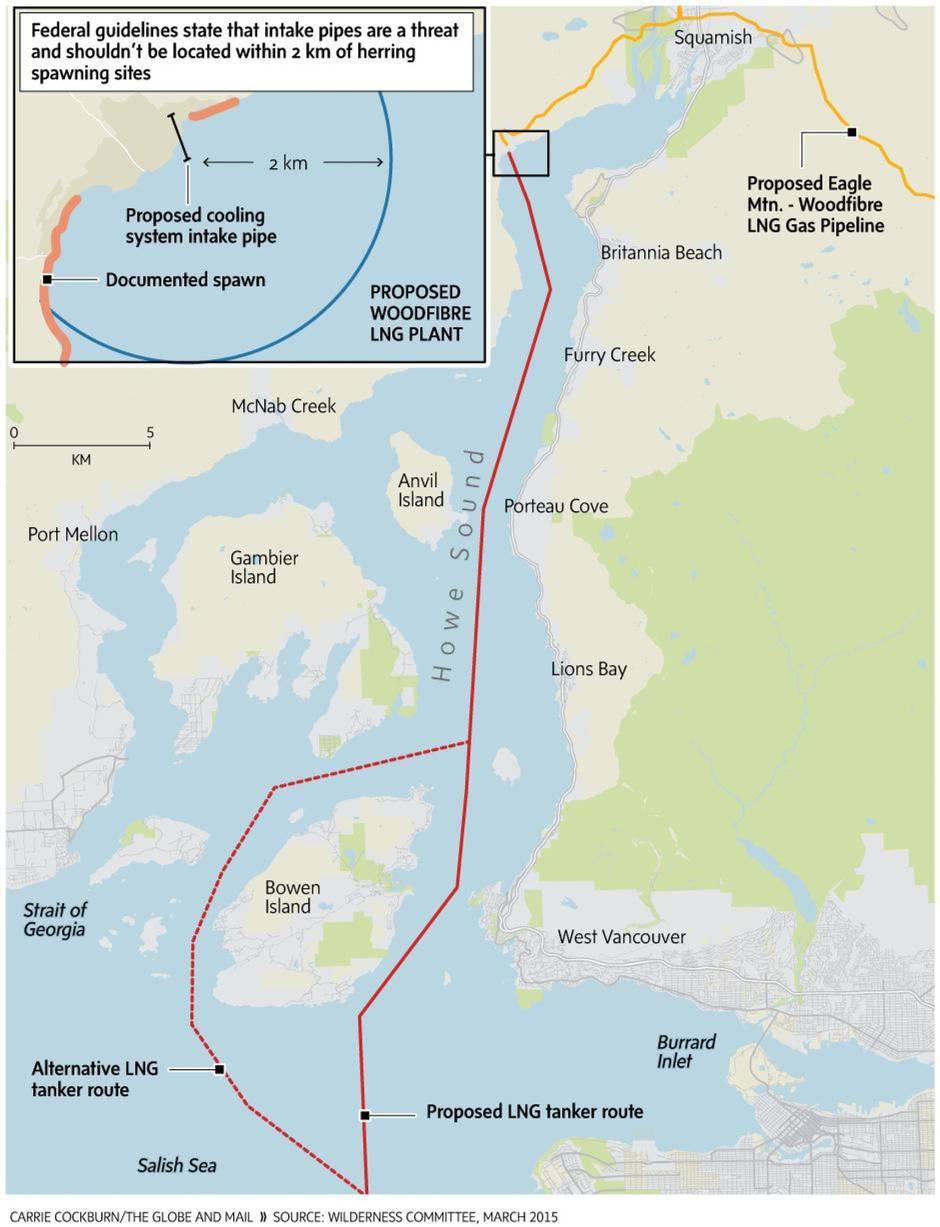 One of the pulp mills and the chemical treatment plant in Squamish closed, a second mill upgraded its facilities becoming one of the cleanest in the world, and the provincial government put a water treatment plant on the long-shut Britannia Mine site, ending acid drainage.

In 2010 Mr. Buchanan reported the first gray whale sighting in Howe Sound in 100 years. And in 2011 he documented the return of salmon, after a 40-year absence, to Britannia Creek, a stream once so acidic local boaters liked to moor next to it to clean their hulls of marine growth.

More recently Mr. Buchanan, who spends his days off working as a citizen scientist, has been documenting the spread of herring throughout Howe Sound. He cruises the shoreline, peering like a short-sighted mariner through his binoculars, until he spots glistening gobs of eggs on seaweed. Then he marks the spot with his GPS and takes photos.

This spring he documented herring spawn near an old pulp mill site selected as the location for the proposed Woodfibre LNG project, which is currently under environmental review by the province.

“It’s all along here,” he said of the herring spawn as his boat drifted near the Woodfibre site where he once worked in the pulp drying room.

Ruth Simons, executive director of the Future of Howe Sound Society, says the return of herring is a key to the broader marine ecosystem revival that she fears is now threatened by a flurry of projects.

“Whac-A-Mole. That’s how I feel. Oh my god, there’s another one,” said Ms. Simons of the way new development proposals keep popping up around the inlet.

Ms. Simons is pushing government for an overall strategy for Howe Sound. Currently there is no single, comprehensive management plan for the area.

“We want to look at the future and ask: what’s the best way to preserve this?” she said.

While the future of Howe Sound may be unclear, the ecological revival taking place now in the inlet is obvious to anyone who spends time on the water.

“I’m seeing things that would amaze you,” said Tony Kristian, who runs Gibsons Harbour Ferry at the entrance to Howe Sound. 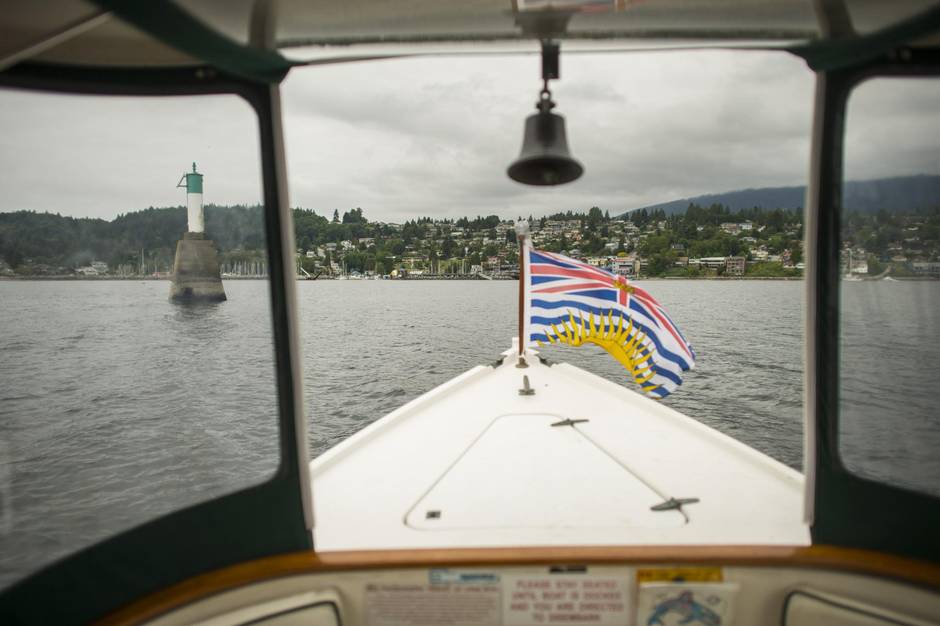 “I’m out here virtually 365,” he said. “One of the most amazing things I’ve seen in the last two weeks is, get this, I have seen orcas swimming out of Howe Sound, the same route, for six days in a row.”

There were years, he said, when he never saw any whales. Now, in addition to pods of orcas, he’s seeing gray whales, humpbacks and schools of dolphins.

Mr. Kristian has also noticed thousands of salmon fry schooling around the docks.

Does he have any worries about the environmental impact of big resource projects proposed around Howe Sound?

“As far as this LNG facility, I really have a hard time seeing the harm to the environment short of some major [unpredictable] catastrophe. So no, I don’t,” said Mr. Kristian.