For Lawrence Alder, it seemed only fitting that British Columbia reintroduced a provincial sales tax on April 1, the day of fools.

"It's a nightmare, just like we anticipated," Mr. Alder, controller for Delta-based International Marine Floatation Systems, says of switching back to a GST/PST regime from a harmonized sales tax that had been in place since July, 2010. "We're going through all sorts of contortions."

The tax flip-flop means more time and paperwork to process invoices at IMFS, which makes floating structures such as marinas for buyers in Canada and abroad.

The transition is also a reminder of how the HST became a political hot potato that scorched the Liberal Party, angered voters and resulted in a rare referendum in which British Columbians voted to turf what some called the Hated Sales Tax. That referendum was the first in B.C. to result in a tax measure being rescinded. Now, as business owners revamp their systems and rebrief their staff, they are being reminded of the fiasco just as the provincial election campaign gets into full swing.

Former Liberal premier Gordon Campbell announced the GST in July, 2009, after the Liberals won the May election and without advance warning. Mr. Campbell pitched the tax as a measure that would help B.C. compete with other jurisdictions, including Ontario, which had announced its move to an HST in March of the same year. But public opinion focused on the snap timing and the higher costs consumers would face for everything from new homes to bicycles and hamburgers. The backlash, championed by former premier Bill Vander Zalm in a populist campaign, was immediate and blistering. Mr. Campbell – indelibly linked to the controversial tax – stepped down in 2010, clearing the way for current leader Christy Clark. She pitched a plan to cut the HST by two points, from 12 per cent to 10 per cent, if British Columbians voted to keep it. They voted instead to scrap it.

That set the stage for this month's return to a combined GST/PST, as well as the requirement that B.C. pay back $1.6-billion worth of transitional funding to Ottawa. The HST may no longer dominate the headlines, but consumers and businesses are still dealing with the aftermath.

The divided camps that emerged after the HST was introduced are still evident, with some sectors bemoaning the return to a dual-tax regime and other business groups, such as restaurant owners, cheering it.

The introduction of the HST in 2010, along with tightened drinking-and-driving regulations introduced the same year, hit restaurants hard, with some operators reporting double-digit drops in sales. Mark Roberts, owner of Luke's Corner Bar and Kitchen in Vancouver, had opened new restaurants before the HST was introduced and was "blindsided" when the Liberals announced the 12-per-cent tax, which applied to restaurant meals.

"If I had known that was coming, I can guarantee you my thought process would have been different," says Mr. Roberts, who closed or sold several restaurants over the past few years and now operates only one. The HST was a factor, although not the sole one, in those decisions, he says.

Under the GST-PST regime, meals are subject to the 5-per-cent GST but exempt from the 7-per-cent PST. Mr. Roberts is now reminding customers of the recent tax change and urging his employees to do the same.

"I'm hopeful we'll get some increased sales out of it because people really are saving 7 per cent when they buy food, and that's a significant savings," Mr. Roberts says. "I do think people in this city watch what they spend … so a savings of 7 per cent in my mind is material."

Perhaps surprisingly, Mr. Roberts says he was adapting to the tax despite its botched introduction. And he wonders how much of an uptick restaurants will see, saying in his experience diners are quick to react to a new tax but don't necessarily change their behaviour once a levy is lowered or reversed.

Restaurant industry groups were staunchly opposed to the tax. According to the Canadian Restaurant and Foodservices Association, the HST took a $1.5-billion bite from B.C. restaurant revenues while it was in effect and and slowed sales, which grew by 1.4-per cent in B.C. between July, 2010, and December, 2012, compared with 11.5 per cent in the rest of the country during the same period.

The Business Council of B.C., however, takes the opposite view, saying the return to the PST regime will hike costs for B.C. businesses by about $1.5-billion a year.

The government has been readying for the transition with a PST Outreach program that includes coaching from ministry tax specialists and seminars at regional chambers of commerce.

Mr. Alder says the biggest change for IMFS is complexity: The HST was straightforward, while there is room for interpretation in how the PST can be applied. IMFS is passing increased tax-related costs on to its consumers, although Mr. Alder says he is not able to give an exact figure as it varies with each project.

David Gray, vice-president of Surrey-based Mill and Timber Products, says he is less bothered by the change back to a GST/PST regime than by some other levies, specifically the carbon tax, that affect his business. "It's a hassle," he says of switching back to the PST. "But the biggest issue is the legacy for the government that introduced it – that's where the biggest price is being paid."

B.C.'s nearly $10-billion-a-year mining industry did not welcome the change. "The simple addition of a 7-per-cent tax on electricity used for production has a significant impact on energy-intensive industries like mining," says Mining Association of B.C. president Karina Brino.

One mine estimates its yearly power bill will increase by $1.5-million as a result of the tax change, Ms. Brino says. Similar calculations are taking place around the province.

The tax shift is also hitting B.C.'s $1-billion film sector. The PST adds between 2.5- to 3 per cent to production costs in B.C. compared with the costs under the HST, says Motion Picture Production Industry Association chair Peter Leitch. That is enough to sway decisions in a famously mobile industry.

"Every single project is shopped around," he says. "It's a real challenge to be competitive and it is already being noticed."

An uphill struggle for the parties, says voters’ panel
May 11, 2018 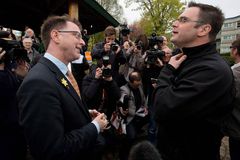