For years, it was barely catch as catch can on the Fraser River as the sockeye fishery collapsed. Now, the boats are out en masse and the fish are literally jumping into the nets as the sockeye run promises to be the largest in a century.

At the mouth of the river Wednesday, dozens of boats were jostling for position to make the best of a brief 32-hour commercial fishery. The mad scramble is leading to some frayed nerves - and frayed nets - as fishermen try to get their share of an estimated run of 25 million sockeye.

Bud Sakamoto stood on the stern of his 37-foot gillnetter Wednesday and watched in disbelief as another boat, its crew distracted by setting out their own net, drifted into Mr. Sakamoto's carefully laid net.

"What are you doing?" he and his crewmates yelled, fruitlessly, in an attempt to get the other boat to change course.

After about 15 minutes of manoeuvring, towing and gesticulating, the nets of the two boats were disentangled and Mr. Sakatmoto is free to haul in his catch, dozens of glistening sockeye salmon.

"Those guys are greenhorns," Mr. Sakamoto grumbled. "They don't even know where the bow of the boat is."

Mr. Sakamoto, the son of a boat builder, in his 60s and a fisherman for 50 years, is a throwback. His boat, the immaculate Crystal S., is made of wood, its white body and teal trim lovingly maintained.

And Mr. Sakamoto's haul is also a throwback, harkening to a century ago, the last time this many salmon have headed up the Fraser River.

On Tuesday, the Pacific Salmon Commission dramatically revised its forecast for the Fraser River sockeye return this year.

That would make this year's run the strongest on the river since 1913. The bounty is especially welcome after a disastrous 2009 season when a little more than one million salmon made their way back to the river.

In July, the commission had estimated the run - the peak of a four-year cycle - would number about 11 million.

The new forecast cleared the way for the 32-hour commercial fishery on the river starting at noon on Wednesday. It will be followed with an aboriginal fishery this coming weekend.

The unexpected bounty not only caught officials off guard but is testing the mettle of a once mighty industry.

In Steveston, where many gillnetters keep their boats, the only cannery is a museum. Ice, used to keep fish fresh while boats are one the water, is in short supply. The handful of companies that buy and process fresh fish are already stretched.

"They're putting it on boats and running it up to Prince Rupert," Mike Rekis said Wednesday as he stood watch over massive fish totes - that each hold 800 pounds of fish - on a Steveston dock.

His company, Ocean Side Fisheries, bought and moved 40,000 pounds of fish during a recent five-hour opening on the Fraser. Sockeye is being sold off boats for as little as one dollar a pound, he said, a price he hasn't seen since the 1970s.

Given this year's returns, fishery officials should increase openings, said Mr. Rekis and others on the docks and boats in Steveston. Otherwise, they say, too many fish could head up river, jamming fragile spawning grounds and potentially threatening future runs. And many rivers are low this year, meaning channels could become churned up and less suitable for spawning even as weary fish arrive.

As Steveston bustles, the Cohen Commission is conducting public forums on the decline of sockeye runs on the Fraser. The federal judicial inquiry was appointed late last year to look into the steady decline of the sockeye over the past 20 years.

But even in the midst of a bonanza that most fishermen say they've never seen in their lifetime, people say the old days are gone. Most experienced fishermen are in their 50s and 60s. Many took on day jobs in order to maintain their boats. Mr. Sakamoto, for example, worked as an architect.

Mr. Rekis, who grew up in Steveston, has three fishing boats and uses them a couple of weeks a year. The maintenance is expensive, but he can't bear to let them go.

"It's nice to see the town come alive like this," Mr. Rekis said. "There are smiles on people's faces, people are happy. I've seen so many people go bankrupt, people lose their boats, lose everything.

"And fishing was never just about making money. It was about the lifestyle. It's nice to see it back."

With files from Justine Hunter in Victoria 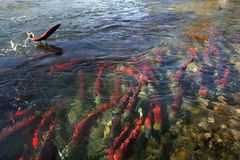 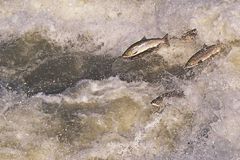 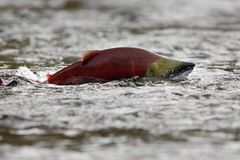 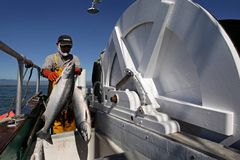