Authorities and domestic worker advocacy groups across Canada are applauding this week's landmark human-trafficking conviction in British Columbia, calling it a precedent-setting victory in the fight against a crime that has seen fewer than 50 guilty verdicts in Canadian history.

Franco Orr, who was accused of keeping Filipina nanny Leticia Sarmiento in domestic servitude in B.C. for nearly two years, was convicted Wednesday of human trafficking, employing a foreign national illegally and misrepresenting facts that could induce an error.

There have been 46 human-trafficking convictions under the Criminal Code of Canada, but Mr. Orr is the first to be convicted of human trafficking under the Immigration and Refugee Protection Act.

Rosalind Currie, director of the Office to Combat Trafficking in Persons at the B.C. Ministry of Justice, called the conviction – the first in B.C. – "very significant."

"One of the big issues we face is a lack of awareness about the issue of human trafficking in B.C. and Canada, so I think this case will really highlight the fact that it happens … and we should all start to learn the signs and indicators," she said Thursday.

Human-trafficking cases rarely make it into the criminal-justice system for several reasons.

Many victims, for example, are threatened with deportation or violence and develop a sense of learned helplessness.

"Almost always, we need the victim's co-operation and testimony," she said.

"If they don't want to go through that process, then we're not going to see those cases going through the courts."

The difference in the two pieces of legislation in relation to human trafficking is that the Immigration and Refugee Protection Act requires that a person be brought into Canada while the Criminal Code "trafficking in persons" offence does not make any such stipulation.

The vast majority of human-trafficking cases the RCMP has seen so far relate to domestic human trafficking for the purposes of sexual service. Of Canada's 46 human trafficking-related convictions to date, sentences have varied considerably, ranging from one day to nine years in prison, Cpl. Singh said. Of 80 such cases that remain before the courts, four are international forced labour cases and 76 are domestic.

"It's good to see that there are agencies and prosecutors out there utilizing this piece of legislation; the more that it's utilized, the more that people become aware of it."

However, Nicholas Preovolos, lawyer for Mr. Orr and his wife and co-accused, Nicole Huen, suggested the gravity of the conviction – which carries a maximum term of life in prison, a maximum fine of $1-million, or both – does not match the alleged crime.

"I think the Public Prosecution Service of Canada was probably anxious to secure a conviction and set an example to deter this kind of activity, of exploitation of individuals," he said. "But as far as human trafficking goes, I don't think this is a very good case. … Human trafficking, to me, sounds more like a situation where you have a young woman, semi-literate, brought over under false pretenses and exploited, more typically, for prostitution than anything else."

Meanwhile, B.C.'s Ministry of Justice has posted notice of intent to award the West Coast Domestic Workers' Association, a local advocacy group, a $70,000 contract to develop and deliver 12 to 14 legal education sessions for service providers on preventing exploitation and human trafficking. The ministry also hopes the information will be disseminated among nannies themselves, but Ms. Currie recognizes the challenge of reaching the most isolated victims.

The sessions will begin this fall and go through to March, 2014, at various B.C. communities. It will conclude with the creation of a report on findings and issues identified and include recommendations.

Ms. Sarmiento, 40, had accused the couple of tricking her into coming to Canada and forcing her to work 16 hours a day, every day, with little pay. She was prohibited from leaving the home, allowed only one phone call home to the Philippines each month and had her passport confiscated, she alleged.

Mr. Orr testified Ms. Sarmiento had pleaded to join the family on its temporary visit to Canada and that she was treated like family in B.C.

Ms. Huen was acquitted on charges of human trafficking and employing a foreign national illegally. 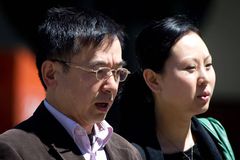 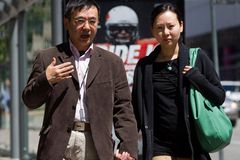 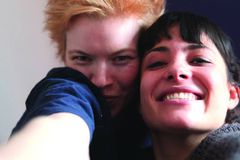