Hundreds of protesters chanted "Arrest Bush" and "Shame," calling on the Canadian government to arrest former U.S. president George W. Bush as he arrived at a Surrey hotel on Thursday.

Mr. Bush and his predecessor Bill Clinton were among the keynote speakers at the annual Surrey Regional Economic Summit at the Sheraton Guildford Hotel. Human-rights groups including Amnesty International have demanded Canadian authorities arrest Mr. Bush for war crimes.

Gail Davidson of Lawyers Against the War said at the protest that the federal government was ignoring its responsibility to arrest Mr. Bush.

"We all know Bush is a war criminal. We all know he's responsible for the use of torture around the world."

His crimes include the use of "torture" on detainees at Guantanamo Bay and leading an "illegal" war on Iraq, she said.

About 200 protesters amassed on 104th Avenue, which police closed between 152nd and 154th Street. Seniors, students and activists carried signs that read "Waterboard Bush" and "Torturer and War Criminal."

Brigette DePape, the 22-year-old page who interrupted the Prime Minister's Throne Speech in June with a "Stop Harper" sign, briefly appeared the protest.

"We see that Bush has committed torture in Afghanistan and in Guantanamo Bay, and our government is letting him get away with it," she said. "We're here to say, 'no longer.' "

Dozens of police officers on foot, on bikes and in cars, patrolled a two-block radius of the event. Two police helicopters circled overhead.

A motorcade of black vehicles entered from the back just after noon. Mr. Bush did not get out of the car. Media were banned from attending his speech inside the event.

Surrey RCMP Corporal Drew Grainger said there were no arrests or violent incidents.

"We had a very structured operational plan in place to ensure the safe assembly of protesters," he said.

"It went very smooth, very much according to plan."

He said the cost of policing the event was justified considering the "huge potential for public safety issues."

The former presidents were invited by Surrey Mayor Dianne Watts and the B.C. Business Council to speak on "the new realities of the North American economy." Tickets cost $599.

A recent speech by Mr. Bush's vice-president, Dick Cheney, in Vancouver saw protesters shoving and berating ticketholders as they arrived. One man was arrested for allegedly trying to choke a staff member.

In contrast, protesters outside the Surrey summit, while rowdy at times, remained distanced from attendees and police.

Shortly after Mr. Bush's speech, a small group of protesters barricaded a back exit and blocked several cars trying to leave the event. The vehicles were re-routed.

B.C. Premier Christy Clark addressed protests outside and at the continuing Occupy Vancouver demonstration in her opening speech at the economic summit.

"I think the folks outside, and outside in Vancouver and around the world, make one important point," she said.

"We do need to be concerned about the middle class."

She said job-creators and individual workers held the power to change B.C.'s economy.

Ms. Watts said conversations with Mr. Bush and Mr. Clinton would give the City of Surrey, the province and Canada a chance to learn "what worked and what failed."

"We can only learn from having those conversations, and we are better off for it." 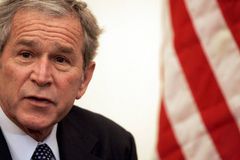 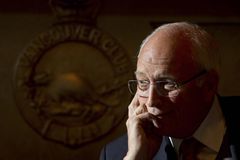