B.C. Universities Minister Ida Chong, the target of a recall campaign by opponents of the harmonized sales tax, is urging voters in her riding to report any "suspected violations" of the law that allows citizens to fire their elected representative.

In newspaper ads set to run on Wednesday, voters are warned of serious consequences for offences - including voters who sign the petition seeking her removal more than once.

Under a red banner, the ad states: "When it comes to recall, know your rights. It's a serious matter."

Ms. Chong said her counter campaign is running the ads because Elections BC has been silent on the rules governing the petition process. She's now convinced the recall law needs to be changed to remove what she called "ambiguities."

The 60-day campaign to fire Ms. Chong enters its fourth week, but it is falling behind its targets.

Recall organizers had hoped the Christmas holidays - with voters home for the holidays - would give them an advantage. "The No. 1 setback is reaching the people," said Mike Hayes, the official sponsor for the recall campaign.

On Tuesday, the Recall Ida Chong team had just under 5,000 signatures gathered from voters who were eligible to vote in Oak Bay-Gordon Head riding in the last provincial election. Mr. Hayes hopes to have 8,000 signatures by the end of the week. The recall campaign needs nearly 16,000 valid names by Feb. 4 in order to force a by-election.

On Tuesday, 20 canvassers were out gathering signatures. Chief canvasser Jonathan Tsukishima selected a promising neighbourhood for door-knocking, an area where residents favoured the opposition New Democratic Party in the last election. On a quiet street lined with stucco bungalows, he found more people willing to sign than not.

William Cox was out walking the dogs - including Augustus, a slobbering, frisky hulk of a St. Bernard - when he spotted the canvassers' bright yellow vests. "I'll sign," he yelled across the road.

Mr. Cox has a long list of reasons why he doesn't like Ms. Chong's government, but he is mostly angry that it opposed the HST before the last election, then announced it would adopt the tax just weeks after winning the vote.

"If they say one thing and then do another, out they go," Mr. Cox said. "I hope we kick her out."

Erica Tyree signed the petition at her doorstep, citing the HST. "When someone says they are not going to do something and then they do it, that's crap."

Peter Hoppe needed no persuasion. He wants to send the government a message. "Government, the way it is now, citizens have very little say. This is the only way to fight back."

All along the street, however, there is no antipathy voiced about the recall target. Ms. Chong is just the involuntary messenger.

"I feel sorry for Ida Chong," said Cathy Ireton, an elementary school teacher, but she signed the petition without hesitation. She said the government should have consulted with the public before imposing the new tax, which merges the federal goods and services tax with the provincial sales tax.

At the recall campaign headquarters, 10 volunteers were managing phones, files and computers. It is a politically diverse group. Mr. Hayes is a New Democrat activist. Mr. Tsukishima comes from a family of Alberta Tories and he is currently campaigning for the Green Party of Canada.

Wendy Lidgate looked up from her keyboard, where she was checking signatures against the official voters' list. At election time, she would never be in the same campaign room as Mr. Hayes. "I've never voted NDP in my life. I voted Liberal in the last three elections," she said.

Ms. Chong has given her supporters the week off, but she said that she still takes the threat of recall seriously. "It's not a question of being confident or complacent. I know the other side is extremely determined to have me recalled."

She said the recall law is being subverted by the anti-HST forces. "This is not about the HST. This is not what recall was intended to accomplish. It was meant for an MLA who was involved in wrongdoing." 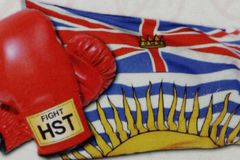 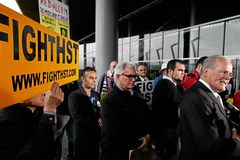 Elections BC changed rules after recall application was submitted
November 26, 2010 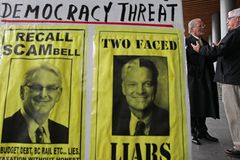