His argument goes like this: First responders such as firefighters and police are funded with property taxes; there is unprecedented pressure on those first responders because of the number of people overdosing on fentanyl; and so when more resources are needed to support those emergency services, property tax is the obvious source.

In this year's city budget, Vancouver homeowners are already facing a property-tax hike of 3.4 per cent. Adding what has been called by some "the fentanyl tax" would bring that increase to 3.9 per cent.

The additional 0.5 per cent would raise roughly $3.5-million to be added to the city's contingency fund of $4-million to combat the crisis.

The largest share of the new money raised would go to funding a new, around-the-clock Vancouver Fire and Rescue Services medical unit, based in the Downtown Eastside.

"The estimated cost of adding, for example, a single medic truck with three firefighters on it would be about $1.8-million to $1.9-million – that would take almost half of the additional amount we're proposing to put aside," Mr. Meggs said in an interview this week.

More than 622 people in British Columbia have died in 2016 of drug overdoses as of the end of October – the majority of those deaths related to fentanyl. In April, when the body count stood at a mere 200, Provincial Health Officer Perry Kendall declared a public-health emergency – something that is usually reserved for contagious diseases such as SARS, which killed 44 Canadians in 2003.

NPA city councillor George Affleck is, perhaps predictably, opposed to the tax. "It's not something Vancouver can do on its own and throw money at and solve," he said of the proposed increase. Mr. Affleck says the responsibility for dealing with the crisis belongs to the provincial and federal governments. His NPA council colleague, Melissa de Genova, says if more resources are needed, the city should be able to find the money in its existing budget.

While one could view this as a startling lack of compassion, I'll give both the benefit of the doubt and suggest their opposition is consistent with the narrative they've advanced that Vision Vancouver sees homeowners as a bottomless ATM.

Mr. Meggs is not so kind, calling it "pathetic" that they would turn their backs on people dying of overdoses. He also challenged Ms. de Genova to say what she would cut from the existing budget.

The province, meanwhile, has implemented some additional measures. Health Minister Terry Lake announced this week the creation of six overdose-prevention sites – two of them in the Downtown Eastside – which amount to a formalization of what community activists have been doing with so-called pop-up injection sites. Other sites would open in Surrey and Victoria.

For those who believe this is a crisis felt only by hard-core addicts in the Downtown Eastside, let's not forget about the 16-year-old girl who died after being found on the floor of a coffee-shop washroom in Port Moody. Let's also remember the young North Vancouver couple who died in their home in July after taking drugs laced with fentanyl. There are countless others who aren't shooting up in back alleys. There are those who became drug dependent after being prescribed opiates by their doctors.

To be selfish about it, imagine that you or a loved one suffers a stroke or a heart attack, or is involved in a car crash and emergency services are too busy to get to you because they're reviving overdose victims.

The scope of this crisis is unprecedented and, at this stage, we are doing little more than stanching the bleeding.

When I spoke with Mr. Meggs earlier this week, he sounded equal parts weary and frustrated – perhaps preparing himself for the inevitable questions about the tax – perhaps already ground down by critics.

But his point was crystal clear: People are dying at the rate of two a day. If those deaths can be prevented with additional funding for emergency services, we have an obligation to do something about it. 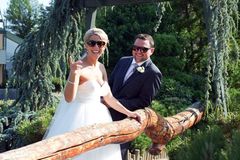