It's a municipal-election ritual one participant jokingly compares with speed dating. On a rainy night, more than 20 would-be Surrey city councillors and mayors are on two levels of seating in a community hall, making pitches for support to about 250 people.

There are so many candidates at the event, each only has a maximum two minutes to speak.

It would be a routine in any municipal election, but it's especially urgent this year because Dianne Watts – once dubbed the fourth best mayor in the world by an international urban-affairs think tank – is leaving after nine years in office, raising questions about whether voters will pick a leader who will carry on with the dramatic growth agenda that has characterized her leadership.

During a hallway conversation at the all-candidates meeting, retired accountant Gary Trotter described the election as a "turning point" vote because it will designate a mayor and team of councillors to deal with crime and crowded schools – the current and future downsides of growth on Ms. Watts watch.

Every month, about 1,200 new residents move to Surrey, a city so big it could hold Vancouver, Richmond and Burnaby within its borders. Ms. Watts oversaw the creation of Surrey's downtown core, complete with a new city hall, public library, city square and plans for a performing-arts centre. There has been $5-billion in spending in the area in recent years.

"Surrey City Centre is becoming a truly urban place and it has happened so fast," says Gordon Price, head of the City Program at Simon Fraser University, which has a campus in that new downtown.

"Vancouver maintains its importance as a historical centre, financial centre and all those other things, but the [regional] growth will be south of the Fraser [River]; so, what happens there is arguably important for the future of the region."

Surrey's new mayor will have an impact beyond the city. When a Surrey mayor speaks on regional issues, people listen – a crucial point as regional mayors work out the tradeoffs required to support such transit issues as both Vancouver's proposed cross-city Broadway subway and light rail in Surrey.

The suspense is causing some anxiety in the city's business community. Anita Huberman, chief executive of the Surrey Board of Trade, says members are uneasy about how they will work with Ms. Watts's successor. "If you're a developer, are you going to be able to work with them? If you have things in the process, are things going to be stalled? From what I am hearing on the ground, that is making people nervous."

Three of seven mayoral candidates appear most competitive, based on polls. One after another, they arrived for a Globe and Mail photo shoot ahead of the community hall event in Surrey's Cloverdale area, warily keeping their distance from each other until called to pose.

City councillor Linda Hepner is the preferred successor of Ms. Watts's Surrey First party. A veteran municipal civil servant before entering elected politics, Ms. Hepner has been forced to defend the status quo while trying to finesse its problems and promise change.

Former mayor Doug McCallum is running as an experienced hand, wary about what he sees as frivolous features of the Watts era, including the city hall, and a regional economic summit that has attracted such speakers as George W. Bush and Tony Blair. He's proposing a two-year tax freeze, a 3-per-cent cut to the city's operating budget and an effort to cut debt.

And Barinder Rasode, elected to council as a Surrey First member, is now running under her One Surrey banner after breaking with Surrey First over its management of public safety, spending and community consultation. She is vowing to do better on all three, but also hold the line on taxes.

All three candidates have been pressed into debate about Surrey's reputation for crime, although a report by the local RCMP detachment this week declared emphatically that crime is declining there. Overall crime, by volume and rate, has been on the decline over the past decade and violent offences declined 19 per cent in 2013, according to the Surrey Crime Profile released by the police force. However, the report did find a 3-per-cent increase, in 2013, in property offences.

But politicians have had to respond to voters' alarm over such incidents as last year's fatal assault of a hockey mom waiting for her son outside an arena as well as the recent random attack and murder of 17-year-old Serena Vermeersch as she was walking home one evening. Suspects have been charged in both cases.

The leading candidates have proposed to hire more Mounties. Ms. Rasode has also proposed hiring 200 community-safety officers to be deployed by the end of 2015 or council would take a 10-per-cent pay cut.

Crime has dominated the campaign in Surrey in a dramatic contrast to Vancouver, where the subject has barely been raised.

It remains to be seen which mayoral candidate is ahead. Polls from the Hepner and McCallum camps have each put their candidates in the lead with Ms. Rasode third. And there's the unknown impact of low turnout. A mere 25 per cent of eligible voters cast ballots in 2011.

Karl Goerndt, a 75-year-old retired engineer attending the candidates' forum, said people are being forced to consider change in the post-Watts era. "But they don't know how to change," he said. "It's going to be an interesting election." 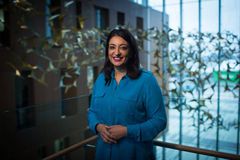