On Halloween night, the commons area in one University of British Columbia residence is crowded with students studying, chatting or showing off their fearsome costumes.

A troop of lumberjacks with identical checked shirts and snap-on beards wield plastic axes. And engineering student Evan Moore is vividly dressed as Pyramid Head – the bad guy from the Silent Hill video games and movies.

But students and staff have been fearful lately of a very different type of monster on campus. The largest police presence in UBC's 105-year history is now on the 400-hectare campus – one of Canada's largest – in an intense hunt for a suspect in six sex attacks since spring. The latest was last Sunday. At about 1:30 a.m., a young woman departing a residence was attacked from behind, but her attacker fled when she waved her arms. Details of the attack are eerily consistent with the previous assaults.

The administration now must prove it can protect the 50,000 students and 14,000 faculty and staff on the campus about 10 kilometres southwest of downtown Vancouver, on the Point Grey Peninsula. But it's not an isolated crisis. Universities across Canada are watching, and UBC's response could shape security measures on campuses across the country.

A working group's report on security, due in a month, is also expected to prompt debate on the increased use of surveillance cameras.

"I have kids who live on campus and I am every bit as concerned about safety as any parent," Stephen Toope, the UBC president, told a news conference this week. "I can reassure parents across the world that we are doing everything in our power to ensure the safety of their children."

Dr. Toope's administration also launched a program Tuesday in which student employees in residences walk with other students among six residence buildings. In the first two nights, less than a dozen of the 10,000 residence students requested RezWalk, and none sought help on Thursday night when The Globe visited organizers.

Still, since news of the attacks became public, demand has exploded for the student-council-run Safewalk program, a 24-year-old institution in which co-ed teams will walk students anywhere at night. Calls soared from an average five per night in the recent past to about 50 per night, peaking at 95 calls on Thursday night.

"What this basically means for the dispatcher in the office is the phone is ringing off the hook on all four lines so it's been pretty crazy," says program co-ordinator Alex Oswell, a 22-year-old marine biology student, who became a Safewalker three years ago after using the service herself.

Early in the evening, she had time to sit and chat. Before long, she was out and running. "Because the change [in demand] literally happened overnight, it has been an incredible strain on our staff."

Meanwhile, the RCMP, who police the campus, have deployed the bike patrol, police-dog services and other officers to protect the campus while profilers and investigators try to catch the suspect. ("There's police and security everywhere," says Mr. Moore, from beneath his pyramid-shaped helmet during a break from chanting.) Police are declining to discuss numbers or tactics, but say they can bring in as many officers as are needed. "We have surge capacity to increase [staff] quickly if there is reason to do that," says Sergeant Peter Thiessen, an RCMP spokesperson.

Many Canadian universities are monitoring UBC's situation. Schools across the country regularly talk with each other about sexual assault through their security and counselling services, but in-depth information is hard to come by – two of the studies on sexual violence at Canadian campuses that are most often cited were published in the 1990s.

"There certainly was a surge of the conversation [about sexual assault] in the '90s, and then it kind of petered off a little bit," said Jennifer Hamilton, executive director of the Canadian Association of College and University Students Services. But her organization plans to tackle the issue at its June conference, especially in light of the recent controversy surrounding students at UBC and Saint Mary's University in Halifax, who chanted offensive refrains about non-consensual sex during orientation week events.

"We are talking about it," Ms. Hamilton said. "I think one of the conversations we're going to have is around what do we know, what are people doing, and how that translates down to educating students."

Officials at numerous Canadian universities contacted by The Globe and Mail said they could not recall any instances of one person committing repeated sexual attacks on a campus over time. Last summer, several women were allegedly sexually assaulted at York University in the span of a few hours, but a suspect was promptly arrested and charged.

Some universities do not disclose crime rates on their campuses, while others leave such data-gathering to local police, and there are no national statistics on the numbers of incidents. But each year, some prominent urban universities report a number of sexual assaults, even as experts suspect many more go unreported. The RCMP are declining to release previous statistics for UBC.

UBC is considering changes to security, but awaiting the conclusions of the working group whose report is due in a month. Dr. Toope says he is keeping an open mind, but is skeptical about more cameras. Other schools have made incremental upgrades to their security infrastructure, such as introducing systems to send emergency bulletins about violent incidents on campus. Carleton University in Ottawa has spent $2-million on security upgrades in recent years, adding more bike patrols, cameras, lighting, assistance phones and improved access systems for buildings such as student residences. Carleton and Concordia University in Montreal both recently established sexual assault support centres, and the University of Calgary is also updating its campus lighting.

"I believe, over time, when the situation is resolved, people will not be concerned about the overall levels of safety," Dr. Toope says. "This is one of the safest campuses in North America. This is very unusual." 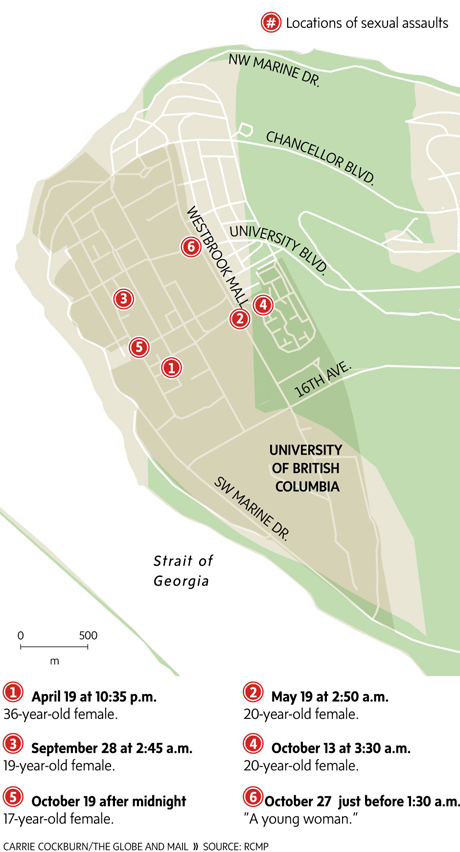 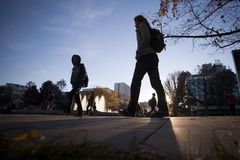 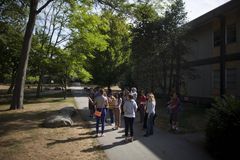 One man responsible for three recent UBC sex assaults, police believe
October 24, 2013
Follow Ian Bailey and James Bradshaw on Twitter @ianabailey @jembradshaw
Report an error Editorial code of conduct
Due to technical reasons, we have temporarily removed commenting from our articles. We hope to have this fixed soon. Thank you for your patience. If you are looking to give feedback on our new site, please send it along to feedback@globeandmail.com. If you want to write a letter to the editor, please forward to letters@globeandmail.com.
Comments