A series introducing the next generation of innovators. We asked prominent British Columbians to nominate people they are watching.

Nominator: Bill Millerd, artistic managing director of the Arts Club Theatre Company, where he has been running the show for more than 40 years.

"When I think about the future of theatre, I'm often asked: 'Where do you think theatre will be in 20 years?' It's people like [Ms. Haberlin] who really encourage me. [Her company is] looking at theatre in different ways, they're not venue-bound, which was the old model."

When this year's nominations for Vancouver's Jessie Richardson Theatre Awards were announced, one production received eight nominations, more than any others. It was Killer Joe, produced by a tiny theatre company and staged in a trailer park constructed in the parking lot of the Italian Cultural Centre. This intimate, frenzied experience won two of those awards, including the Jessie for outstanding production in the small theatre category. And it attracted an unusual kind of audience for theatre: young people.

Ms. Haberlin, 30, began producing plays in her East Vancouver basement as a kid. "If you came over to my house, you were in one of my plays; I wrote a play for my Grade 4 birthday party that everyone was in," says Ms. Haberlin, whose mother, Maria LeRose, worked in TV. "My brother was always in a dress in some production."

She started directing plays in high school, and was at University of Victoria studying theatre when she and two classmates mounted Edward Albee's The Zoo Story at a directors' festival in Chilliwack, B.C., where a snap decision was made to form a company.

The production experience was a bit of a zoo: They had a name for their production company. "I was like 21 or something and I said we should start a company and we should call it Itsazoo. … I didn't know that would mean it taking almost 10 years from that day for it to be anything. But I just kept doing it because I thought this will be something eventually."

It has become something. Itsazoo quickly moved into site-specific work, mounting A Midsummer Night's Dream and then Alice in Wonderland, both directed by Ms. Haberlin, at UVic's Finnerty Gardens. There were more productions, but Ms. Haberlin felt she was stalling, and so was the company.

So Ms. Haberlin decamped to University of British Columbia for two years, where she earned an MFA – she was one of only two people in the directors program – and benefited from mentorship and one-on-one attention.

When she graduated, the company began a new phase.

"We kind of entered into a different kind of work – the sort of in-yer-face immersive work."

("In-yer-face" is an actual term: a kind of bold, confrontational theatre that emerged in the post-Thatcher era in Britain, and the plays are in-your-face in terms of content and performing style.)

This is the kind of work that has come to define the company, and which impressed Bill Millerd. In 2012, he saw Jez Butterworth's Mojo, a site-specific work at the Russian Hall, where audience members at times shared tables with the actors as they performed.

"I was impressed with the way she handled the actors," Mr. Millerd says. "When you're that close to these actors … they can't fake it when you're sitting inches away from them. It was incisive, focused, and clearly a lot of trust was going on between her and the actors."

This year, the company built that trailer park and continued to build a reputation in the local theatre community with Ms. Haberlin's terrific Killer Joe. Audiences not only enjoyed the play itself but invested in the experience, showing up early and staying late to drink beer and eat barbecued hot dogs in the trailer-park atmosphere. And then came those Jessie nods.

"To get that many nominations meant so much," Ms. Haberlin says. "It felt like Vancouver saw us. And that we had found something that was fulfilling for us but also struck a nerve with the community. And that combination felt magical."

Over the past few months, Itsazoo has gone through a comprehensive strategic planning process, looking to build on that success, and has devised a new mission statement: "to produce dynamic, immersive theatre events – not plays but theatre events – for daring audiences," Ms. Haberlin says. "So every play we make now has to do that. It has to be dynamic and immersive and it has to be for a daring audience. You can't come to one of our plays if you just want to sit back and have an enjoyable time."

Up next for the company: Ms. Haberlin will direct an original play by her co-artistic director Sebastien Archibald (who is also her fiancé), The Competition is Fierce. Set in a corporate environment in the not too distant future where employees are forced to fight to climb the corporate ladder, it is described as Wall Street meets Lord of the Flies.

The play, which opens in March, presents many challenges – intricate fight scenes, and each of the actors performs in the nude at one point.

"When you're producing your own work, it's so hard to get a play up that when you actually do go to make the play, it has to be challenging," she says. "What's the point of doing it if it's going to be easy?" 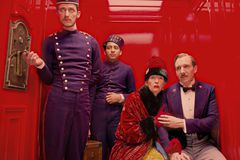 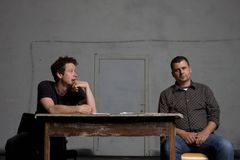 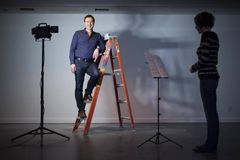 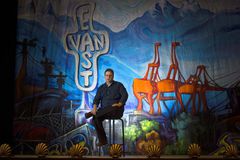