John Koerner's first love was art and he was not going to let his age break them up.

He knew great things could be accomplished late in life. In his 2005 book A Brush with Life, Mr. Koerner ended his autobiographical essay quoting poet Henry Wadsworth Longfellow on the subject of aging: "Ah, nothing is too late, till the tired heart shall cease to palpitate."

A prolific artist throughout his long career, Mr. Koerner had fled prewar Europe to escape the Nazi threat and immigrated to British Columbia, where he came to be friends with an influential group of artists that included Lawren Harris.

He was still making art last September, when he turned 100, painting until late 2013. Even as he grew weaker and took to his bed, he continued to produce drawings. He was in talks with his gallerist about marking his 101st birthday with an exhibition of 100 drawings made while he was 100.

"Until really close to the very end, maybe within a week, he was still drawing," gallerist Ted Lederer said of his friend Mr. Koerner, who died Feb. 23 at his home in Vancouver. "He would be in bed, with his paper and his pens."

A deep thinker with a sharp wit and a gentle soul, John Koerner was born in 1913 in Moravia, in what is now the Czech Republic, into a wealthy family that ran a lumber empire. He started painting at the age of 4, and a summer in Paris at 15 – his parents wanted him to learn French – inflamed the passion. He spent weeks at the Louvre, thrilled by the cubist and surrealist art. He studied life drawing at the Académie de la Grande Chaumière and with the renowned poster artist Paul Colin. The following summer brought more exposure to the great masters, this time in Italy.

"He never thought of being anything else but an artist," said his wife, Lisa Birnie.

His father, although supportive, was also practical and urged his son to consider law. Mr. Koerner began those studies at Charles University in Prague. Once he determined that class attendance was not mandatory, though, he combined his legal education with trips to Paris, sitting in on lectures at the Sorbonne.

The family was Jewish – not at all observant, but as the Nazi threat loomed, Mr. Koerner's uncle Otto, who lived in Amsterdam, where he ran the family business, recognized the danger. In 1938, Mr. Koerner returned home from a day at the university library and found his family gone. There was a note with instructions. He hastily packed a suitcase and headed for the airport, where his uncles Walter and Leon were waiting; they boarded a DC-3 Otto had chartered to fly the family out of the country. "They walked out of the house in Prague and left everything," Ms. Birnie said.

Mr. Koerner settled in Paris, where he studied with painter Victor Tischler. But the family, concerned about Hitler, wanted to leave Europe altogether. They wound up in Vancouver in 1939, where they recognized the lumber opportunities. They bought a mill in New Westminster and called the company Alaska Pine and Cellulose.

The extended family's decision to settle in Vancouver was beneficial to the city, leading to philanthropic endeavours that include the University of British Columbia's library, graduate student centre and faculty club. "The whole Koerner family was one of the great additions to Canada when they came because they did so much for Canada," said artist Gordon Smith.

Mr. Koerner worked in the family business for 12 years, but his passion was elsewhere. In 1951, he was able to leave his job for his first love. He painted and studied. He taught at the Vancouver School of Art (now Emily Carr University of Art + Design) and later at the University of British Columbia. He showed his work locally, including at the famed New Design Gallery, and received what he described as a tremendous boost when the National Gallery acquired seven of his works.

"He was a very good painter. He was very underrated; I think his works should be seen more," Mr. Smith said. "I couldn't speak more highly of him. He was a great human being."

Mr. Koerner formed friendships that would prove hugely influential – with Mr. Smith and other painters, including B.C. Binning, Jack Shadbolt and Lawren Harris. "They influenced generations of painters to come," said Mr. Lederer, president and owner of the Elliott Louis Gallery in Vancouver. "You cannot overstate how important people like John Koerner were to the art in Vancouver."

Mr. Harris had moved to Vancouver with his wife, Bess, and they were a force on the local art scene. Mr. Koerner became close friends with the Group of Seven co-founder when Mr. Harris asked him to join the Vancouver Art Gallery's exhibition committee. "We would go on long walks and discuss everything from art making to walking shoes," Mr. Koerner wrote in A Brush with Life.

Mr. Koerner also attended the legendary salons at the Harrises' home in Point Grey. "They had regular musical evenings at their house on Belmont and played classical recordings followed by lively discussions," he recalled in a video made for a career retrospective at the Penticton Art Gallery in 2013. "One summer, the Harrises were out of town and their whole collection of records was stolen. That was the end of the music. But Lawren remained our respected and well-liked friend. I am sure that the extreme prices of his paintings today would make him laugh in disbelief."

The show John Koerner: The Hidden Side of Nature, in Penticton, marked his 100th birthday. Director and curator Paul Crawford recalls the artist at the opening, a week before he turned 100, waiting around to ensure that he spoke to every person in attendance: "John had a grace, dignity, humility and sense of gratitude that I have only experienced a few times before."

The Penticton retrospective followed a smaller exhibition and birthday celebration at the Burnaby Art Gallery.

"It was a nice time to reflect on a career," said Darrin Martens, then director/curator at the BAG (now director of the Nisga'a Museum) "It [was] a space that was very warm, welcoming and also celebrating a life with someone who has dedicated his life to his art."

In addition to the National Gallery, Mr. Koerner's work can be found at the Art Gallery of Ontario, the Vancouver Art Gallery, the Seattle Art Museum and in many other collections. He was commissioned to create a number of murals, including a large-scale work for the foyer of Vancouver's Queen Elizabeth Theatre.

Mr. Crawford said it was a shame that Mr. Koerner was not recognized with a show closer to home during his milestone year. "It's a tragedy that his hometown failed to take this amazing opportunity to recognize his life and work and I truly believe it will be something that many may come to regret," he said from Penticton.

"I ... always felt his work was misunderstood and underappreciated by many working in the public gallery system."

There was a strong spiritual aspect to Mr. Koerner's work, and he was guided by the teachings of German philosopher Bo Yin Ra, whom he discovered at age 19 and continued to study all his life. Mr. Koerner wanted his art to be uplifting; in a 2013 video, he said his aim was to give the viewer "a sense of celebration, of the abounding wealth of nature, and personal invention."

"One of the most important aspects of his personality and painting was that he wanted to paint the positive and turned away from darkness," Mr. Lederer said. "This no doubt cost him in terms of his career, but he was absolutely consistent and focused throughout his entire career."

Nearing the end of his life, Mr. Koerner began work on a series of sketches of his wife and himself, even as he was weakening. "Just tiny little pen and ink drawings," she said. "John continuedto draw. His drawings are very, very fine."

Emily Carr University looks for a fundamental change with a new campus in East Vancouver
February 27, 2014 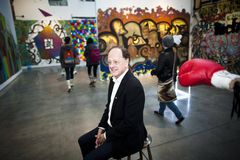 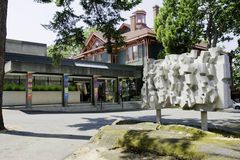 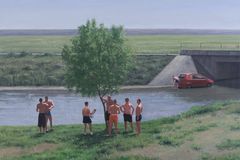