Some indigenous artists in British Columbia are combining ancient traditions with new technology to create an innovative business model for their work.

Through the Aboriginal Doors program, indigenous carvers create door panels, which are then reproduced roughly by computer on red or yellow cedar and finished by hand. The reproductions can be sold at a much lower price – making this authentic aboriginal art more affordable and accessible, while also allowing the artists to earn more income from their work.

"It makes it more affordable for people who really want to have a piece of First Nations artwork," says Coast Salish carver James Harry, 26. "Because this way it doesn't take us as long to produce them but you're still getting the authenticity of the hand-carved finish."

This program is the brainchild of Chris Gaston, associate professor in the Faculty of Forestry at the University of British Columbia, who took his idea to Emily Carr University of Art and Design.

"The original took up to eight weeks to carve. The [Computer Numerical Control] machines could a make a rough copy in literally a matter of hours," explains Prof. Gaston, who is also the university liaison with the non-profit forestry research centre FPInnovations.

"It was quite a genius idea that Chris had," Emily Carr's aboriginal program co-ordinator Brenda Crabtree says. "What we loved about it was it was a cultural initiative that actually had economic benefits that were not only developing business models for aboriginal artists but helping them with employment opportunities."

Ten artists from indigenous communities across B.C. spent four weeks last summer studying at Emily Carr in Vancouver and the Freda Diesing School of Northwest Coast Art in Terrace, led by master carvers – Rick Harry, also known as Xwalacktun, in Vancouver; and Ken McNeil in Terrace. Each artist – ranging from emerging to more experienced carvers – was tasked with hand-carving an original 66-centimetre by 177-cm door panel.

"It was really interesting from my perspective because I've been carving my whole life," says James Harry – Xwalacktun's son – who created a work he describes as a self-portrait, with imagery that includes a thunderbird, wolf and bear. "It was interesting to see … carvers I'd never met before; to see their technique."

Once completed, the panels are scanned and reproduced. The artists then spend a few days hand-finishing the replicas, which are considerably less expensive than the original.

Depending on the artist, the originals could sell anywhere from $5,000 to $30,000, Prof. Gaston figures, whereas the hand-finished reproductions would sell for as little as $2,000 to $6,000. (Prices will be worked out between the artist and the buyer, and also depend on the number of limited-edition copies the artist decides they want cut.)

The artist owns the original work. "We're trying very hard to make sure that all of the intellectual property remains with the artist," Prof. Gaston said, adding he hopes to show the pieces everywhere from international home shows to Canadian museums.

Ms. Crabtree says Emily Carr University will purchase several of the panels for its new campus, now under construction. There has also been interest from developers and corporations. But with the price point, she says the panels are not out of reach for individual homeowners either. She is planning to buy one herself.

"You have really affordable aboriginal art; you have really functional aboriginal art," Ms. Crabtree says. "So our expectations are once we're finished with this project and we get [the artists] to get their price points all set, they can just do it all themselves."

And if this round proves successful, Prof. Gaston hopes to keep the program going.

"Hopefully we're just creating a template to do this sort of thing again." 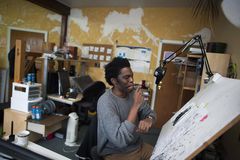 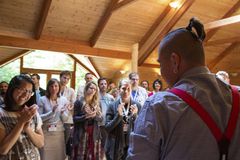