The Heiltsuk Nation, which relies on beaches near the tug accident site, has called the situation a disaster.

The sinking of the Nathan E. Stewart

Audio recordings reveal how first responders struggled to get a clear picture of an unfolding disaster, reports Justine Hunter

The Officer of the Watch aboard the tugboat Nathan E. Stewart checked in with the Coast Guard's marine traffic centre in Prince Rupert, B.C., late on the evening of Oct. 12, making a routine report of his vessel's progress through the inside passage of B.C.'s north coast as it passed Freeman Point, pushing a 100-metre-long empty fuel barge.

After confirming there was no other marine traffic in the area, the official with the Coast Guard's Marine Communications and Traffic Services (MCTS) concluded the radio exchange, wishing the bridge crew a "safe watch" as the articulated tug and barge headed south toward Milbanke Sound on a route through the heart of the Great Bear Rainforest.

But the night ended in disaster, with the tugboat running aground, and a large oil spill lapping at the shores of the rain forest. The accident occurred as the federal Liberal government was preparing to respond to British Columbia's calls for a "world-leading marine oil spill response" plan as early as Monday – and weeks ahead of a decision on the fate of Kinder Morgan's proposed oil pipeline expansion to the west coast. 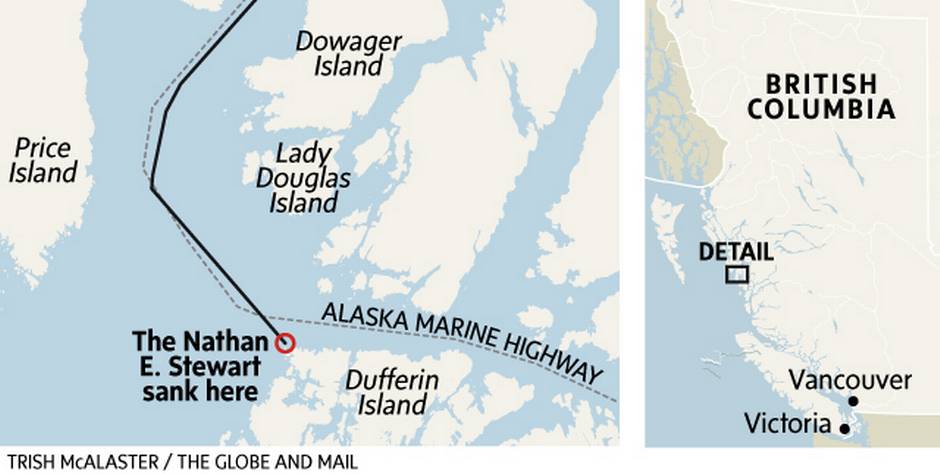 Audio recordings obtained by The Globe and Mail reveal how first responders struggled to get a clear picture of the unfolding disaster, while the crew of the U.S.-based tugboat sought to manage the accident in hostile waters.

The next report from the tug was a distress call, more than two hours after passing Freeman Point. The tug had missed a course change entering the broad expanse of the Seaforth Channel, and had pushed its barge straight into a reef.

The MCTS is responsible for monitoring distress calls, co-ordinating responses, and taking action to ensure the safe and efficient movement of vessels in Canadian waters. However, with only two MCTS officers responsible for monitoring a vast stretch of B.C.'s coast, from north of Vancouver Island to the Alaska border and including the inside passage, a source with knowledge of the situation says there was little chance that anyone would have spotted the doomed course of the tug, charted in real time on marine traffic maps through its Automatic Identification System transponder.

The Nathan E. Stewart tells the Coast Guard it has run into trouble.

"Good morning, we have run aground here," the Officer of the Watch can be heard calmly reporting to the Prince Rupert Coast Guard station. (The vessel's owner, Kirby Offshore Marine, will not identify the officer as the incident is under investigation by the Transportation Safety Board.)

It was 1:11 a.m. on Oct. 13, and it would be hours before the scale of the resulting oil spill would become evident. Although the fuel barge was empty, the tug itself carried 223,831 litres of diesel fuel, as well as thousands of litres of lubricants.

The Coast Guard learns that both the barge and the tug have run aground.

Three weeks later, dozens of ships are still on the scene cleaning up more than 100,000 litres of diesel fuel and 3,700 litres of lube oil, hydraulic oil, gear oil, and spent lubricants released by the sunken tug. Public anger is growing as another tug with a barge full of fuel – like the Nathan E. Stewart, travelling with a waiver to spare the cost of carrying an official Canadian pilot on board – is making its way up the coast, taking over the Nathan E. Stewart's regular delivery run.

From the start, the first responders knew this incident would have broad implications for the transportation of fuel, given the long-standing opposition of local First Nations to the barges going through their territories. Although demands for an oil tanker ban off the coast have rallied environmentalists, these communities have long objected to even these smaller vessels because of concerns about the potential impact of a spill on marine life.

An hour after the first call for help, the Coast Guard lifeboat Cape St. James arrived at the scene from the nearby community of Bella Bella. The officer in charge immediately offered to pull the tug off the rocks.

'No danger of sinking'

The Coast Guard lifeboat Cape St. James arrives and offers help; the Nathan E. Stewart replies that it doesn't need to be evacuated.

From the tugboat came the reply: "No sir, I do not want to try to pull it off."

From the Cape St. James, the officer in charge questioned the decision, warning that the tide was still going out. "Are you comfortable with that?" he asked. "Yes sir," came the reply. "We are hard aground and at the moment it doesn't appear we are taking on any water. I don't want to pull it off unless she starts taking on water."

It was a gamble – hoping the fuel tanks would not be punctured as the tug was battered on the rocks, before the tide would return and lift the Nathan E. Stewart free.

As cleanup and rescue crews mustered along the coast from the Coast Guard, Western Canada Marine Response Corp., and the local Heiltsuk First Nations community, the tug's crew was fighting a losing battle. Declining assistance from the Cape St. James, they deployed their own containment boom, which then broke.

The Nathan E. Stewart is taking on water and pumping fuel out of a breached tank.

As 5:38 a.m, just 20 minutes after low tide, the Prince Rupert Coast Guard got another call from the tug: "We have breached our bulkheads here; we do have some fuel leaking out. … We started taking on water in the bilge."

The crew of seven remained aboard, working to pump fuel from the tug to the barge. But the situation was deteriorating. "We had a complete valve failure in the engine room, over our One Starboard tank," came the next report from the bridge. "And as a result, our bilge is filling with fuel. We also had another breach on the starboard side of the bulkhead. We are taking on more water … in the engine room. We're coming up to the generator there, so we won't be long here – we're going to lose power."

The tug's bilge is filling with fuel and the vessel is taking on so much water that it's about to lose power.

Still, the officer on the bridge maintained the tug would not sink as it was lodged on the rocks and firmly attached to the barge. With no power, the crew were relying on a hand-held radio to communicate. The Cape St. James' officer in charge again suggested a tow line, and once again, the offer was refused.

Over the next two hours, two more Coast Guard ships arrived and most of the crew abandoned the tug for the relative safety of the barge. By 9:25 a.m., the tug had sunk and, in heavy seas, the crew were transferred to a Coast Guard vessel.

The accident occurred in the traditional territory of the Heiltsuk Nation, and the community was contacted once it was clear there was fuel in the water. But even before that call was made, first responders knew the Heiltsuk would be unhappy.

After the tug crew's initial call for help, the Prince Rupert MCTS alerted the Coast Guard.

"Our partners are just working a grounded barge. This is probably going to be a high media event," the officer informed a local Coast Guard official. "Not just because he ran aground but the Nathan E. Stewart, when he has been travelling through, the First Nations groups have been complaining about him. Because he does have a fuel barge and they don't want him going through the inside waters, and he's aground just near Bella Bella."

William Housty was appointed On Scene Commander for the Heiltsuk. After almost three weeks of watching his community's clam beaches and salmon streams threatened with contamination, and the discovery of dead marine mammals and oil-slicked birds, he vented his frustration on Twitter: "Canadian Coast Guard rescue vessel stood dwn 3 times by the #NathanEStewart captain. Hv to question that, is CCG the real rescue authority?"

An official from the Coast Guard said Thursday that the crew of the Cape St. James were correct to defer to the tug's captain. In the initial stages of any incident, the responsibility lies with the master of the vessel to decide what is best for their vessel and the safety of their crew.

The federal Liberal government has promised to impose a ban on oil tanker traffic on the north coast of British Columbia, but the Heiltsuk are now pressing for stricter controls on smaller vessels that can still carry tens of thousands of barrels of fuel.

Kelly Brown was one of the first responders from the Heiltsuk community when the tug was grounded. He cannot explain how the tug could have missed the course adjustment. But until the answers are provided, he said, no fuel barges will be welcome in the region.

"It's unfortunate they are continuing to run these tugs when we are still cleaning up, when we haven't figured out what happened here," he said. At a minimum, the tugs should not be eligible for a waiver to avoid having a Canadian pilot aboard, he said. "They are risking our livelihoods for the sake of saving a few dollars for a company moving tens of thousands of tonnes of fuel."