When the tug Nathan E. Stewart and its empty fuel barge ran aground on a reef and began leaking diesel fuel in the waters off the Great Bear Rainforest on Oct. 13, the Coastal First Nations began tracking another fuel delivery tug from Washington State that is making its way to Alaska via B.C.'s marine highway.

The progress of the Dale R Lindsey could be followed on publicly accessible marine-traffic services through its automatic identification system (AIS) transponder. The Heiltsuk Nation community of Bella Bella was closely monitoring the articulated tug and barge to see if it entered its waters, where the Nathan E. Stewart had gone down. They lost track of the vessel while it was south of their traditional territory. Nine hours later, the tracking resumed, north of their community.

On Monday, Prime Minister Justin Trudeau promised that improved tracking of marine vessels and enhanced sharing of marine-traffic information with indigenous communities on the coast in real-time will be part of the ocean-protection plan he announced in Vancouver.

"The ongoing incident at Bella Bella is unacceptable," Mr. Trudeau said. "It's time for a change. We need to protect our magnificent oceans." That change, he promised, will recognize that indigenous communities on the coast play a key role in marine safety.

Although details were not provided in Monday's announcement, the federal government has committed to improving its vessel management so it will be able to track all vessels in its waters. The plan calls for "pro-active management of all vessels" and for that real-time tracking to be available to First Nations and other coastal communities.

Marilyn Slett, chief of the Heiltsuk Nation and head of the Coastal First Nations, an alliance of First Nations on B.C.'s north and central coast and Haida Gwaii, attended the announcement and welcomed the Prime Minister's commitment.

She said the inability to track marine traffic now is unacceptable. "Nine hours seems a big dead zone. We're really concerned about that," she said. The Heiltsuk want the right to direct fuel barges to outside waters, away from the coastal areas that provide their traditional food sources. Currently, the clam fishery is closed because of fears the diesel fuel from the wreck of the Nathan E. Stewart has contaminated the water.

"As coastal communities, we must have a say about who is traversing through our waters. His announcement was positive," Chief Slett said in an interview. "We live on the coast, that responsibility and authority rests on the coast because we bear the risks."

Joe Spears, a maritime-safety expert who also attended the announcement, said the technology is available to allow such tracking, and the State of Alaska – which Mr. Trudeau cited as a model for world-leading marine protection – makes such tracking mandatory.

He said the Canadian Coast Guard does not use satellite-based AIS data, though it does have some shore-based AIS receivers. He said accurate radar coverage is "impossible" in many parts of B.C.'s 28,000 square kilometres of coastline.

"You can have continuous tracking of all vessel traffic in Canada's waters," he said. "When you use the information that is available, you make better decisions."

Mr. Spears said Alaska's regime provides a framework that would improve protection of Canada's coastline. "Let's focus on the prevention. It's easier to drink coffee from a mug than lick it off the floor."

A Canadian Coast Guard official said on Monday the Dale R Lindsay was continuously transmitting with its AIS transponder, and has checked in with the Coast Guard's Marine Communications and Traffic Services at all required points as it makes its way up the coast. The publicly available software may have lost track of the tug, but the Coast Guard did not.

However, the changes announced on Monday could mean that such real-time information would be shared with coastal communities.

"As recent incidents show, First Nations are always first responders and it's important to work together to ensure they have the resources and authorities that they need," Mr. Trudeau told the news conference on Monday. 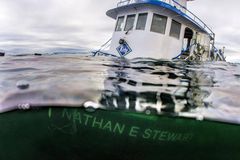 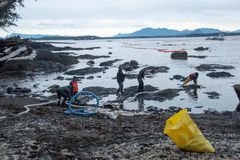 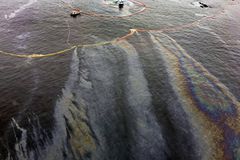 Oil cleanup from sunken tug on B.C. central coast criticized as storm looms
October 18, 2016
Tug's diesel spill a ‘nightmare’ for Heiltsuk Nation in British Columbia
October 13, 2016
Follow Justine Hunter on Twitter @justine_hunter
Report an error Editorial code of conduct
Due to technical reasons, we have temporarily removed commenting from our articles. We hope to have this fixed soon. Thank you for your patience. If you are looking to give feedback on our new site, please send it along to feedback@globeandmail.com. If you want to write a letter to the editor, please forward to letters@globeandmail.com.
Comments