Local politicians in Kamloops, B.C., voted on Monday to oppose a controversial copper-gold mine that would operate just outside of the city limits.

The city doesn't have the authority to stop the Ajax mine, owned by Poland-based KGHM, but hopes federal and provincial governments will take Kamloops's position into account, the city's acting mayor, Arjun Singh, said. "We'd like, certainly, to be heard in what we are saying," Mr. Singh said.

"We realize we are not the final decision makers – but I think the work that we have all done to assess [the project] leads at least the majority of us to think it's not a good idea for the community."

The proposed mine, which is also opposed by First Nations in the region, has been a divisive issue for the city. Supporters cited its potential to create hundreds of stable, high-paying jobs and millions of dollars worth of tax revenue for governments. Opponents raised concerns about dust, noise and potential health effects. The mine's proponent, KGHM Ajax Mining Inc., rejigged its original proposal in 2014 to address some of those issues.

But concerns remained, with critics saying potential risks from the project – which would be within two kilometres of residential areas – were still too great.

On Monday, council voted 4-2 to draft a letter to senior levels of government saying it is not in favour of the mine and to include reasons for that opposition. "The message from council to regulators is that we are a solid no – an unequivocal no – and here are the reasons why," Mr. Singh said Monday.

Council's position does not come as a surprise and KGHM will continue to pursue the project, said KGHM Ajax project manager Chris Wild.

"They've taken a position to not support the project and we acknowledge that – we've been through this for some time and we understood where the numbers fell on city council," Mr. Wild said. "Their input is appreciated, but we're really waiting for the regulatory decision that will be made by the provincial ministers … and the federal minister." Mr. Wild said those decisions could come sometime this year.

KGHM owns 80 per cent of the project, while Vancouver-based Abacus Mining and Exploration owns the remaining 20 per cent. KGHM initially filed the proposal in 2011. The project was the first in B.C. required to prepare a community consultation plan as part of its proposal.

Stk'emlupsemc Te Secwepemc Nation (SSN) in March declared its opposition to the Ajax Mine following its own environmental review. SSN, which represents two First Nations communities, said the Ajax Mine Project "is in opposition to the SSN land use objective for this profoundly sacred, culturally important and historically significant keystone site."

Should the mine go ahead, the City of Kamloops has agreed in principle to a Community Benefits Agreements with KGHM Ajax Mining of $3.8-million a year. The project has an estimated cost of $1.3-billion. KGHM says the mine would operate for 23 years and employ about 500 people, with about 1,800 jobs during an initial construction phase.

Kamloops is holding a by-election on Sept. 30 to fill three vacancies on city council, including that of former mayor Peter Milobar. Mr. Milobar ran in the provincial election in May and was elected as a Liberal MLA for Kamloops North Thompson.

Thousands of B.C. wildfire evacuees in Kamloops met with kindness, donations
July 18, 2017
Company unveils new plan for B.C. mine to address concerns about health risks
May 12, 2018
Critics of B.C.’s Ajax mine project press federal Environment Minister for review panel
May 11, 2018 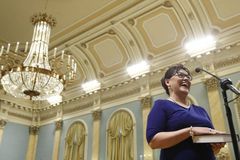