A kiss that was 15 years in the making was finally exchanged Saturday on a stage in Kelowna.

The master of ceremony was doing most of the smooching, but Mayor Walter Gray was happily taking it on the cheek, smiling and laughing as he did what he refused to do in 1997.

To the delight of about 50 people gathered in Mission Creek Regional Park, Mr. Gray read a proclamation declaring Pride Week.

"I've been looking forward to this for quite some time," Mr. Gray said before reading the declaration.

Among other things, it says that Kelowna is a safe and tolerant city that respects diversity, and strives for equality among all of its residents.

However, it also acknowledged what to many is an obvious reality — that gays, lesbians and others are often victims of discrimination due to their sexual orientation.

Plain enough words, perhaps, but ones with a whole lot of history behind them. That fact was not lost on most of the crowd members, who clapped, cheered and waved rainbow flags when Mr. Gray finished reading the proclamation.

"Never thought I'd see this day," one of the people gathered in front of the stage said to herself.

In 1997, Mr. Gray refused to sign a proclamation in support of Gay and Lesbian Pride Day. He said that he thought doing so would offend many of his constituents.

That brought Mr. Gray a rebuke from the B.C. Human Rights Commission, which ruled he had engaged in an act of discrimination.

In response, Mr. Gray refused to sign any proclamations, a stance he maintained until being defeated by Sharon Shepherd in the 2005 municipal election.

Running to regain his old job last year, the inevitable question of a pride proclamation came up early in the campaign. Mr. Gray suggested that times had changed and he would sign such a proclamation if a majority of his councillors thought he should.

They did, and Mr. Gray actually signed the document declaring Pride Week several months ago with little fanfare.

But Saturday was the proclamation's coming-out party. It was a chance for members of the gay pride community to see for themselves whether Mr. Gray's actions matched the fine words on the document he'd signed.

He received lukewarm applause when he first stepped up to the microphone.

But Mr. Gray, who's been married for 46 years to his wife Doreen, quickly drew a big laugh when he jokingly accepted an invitation from the emcee drag queen, who goes by the name Ms. Oddree Mayormaynot, to change his sexual orientation.

"Now remember, for the last half-hour, I've been looking at your derriere, and I've changed my mind," Mr. Gray told Ms. Mayormaynot.

More seriously, he told the crowd that Pride Week in Kelowna is a celebration of diversity, but also a chance to reflect on similarities between all people, such as their desire for a better life, their common ambitions, and their need to love and be loved.

Mr. Gray's conversion to endorsing a gay pride proclamation did not come without a few caveats, however. He suggested it was due in large part to a "new breed" of Pride Week organizers who, he said, had worked to create an "event of inclusiveness."

That encompassing nature of Saturday's picnic in the park was reflected by the range of corporate supporters on hand in sponsorship tents, and by the presence of politicians from the federal Conservative party, the provincial Liberals and the NDP.

Angela Reid, a former city councillor and current member of the local Green party executive, said, "It is wonderful to see a rainbow of political stripes here." 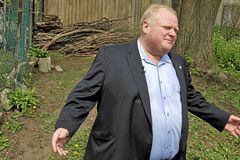 Ford cheered for surprise appearance at anti-homophobia event
May 17, 2012 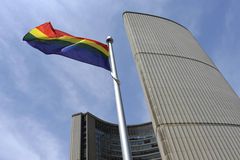 Pride grant in limbo as Queers Against Israeli Apartheid plan to march
May 22, 2012 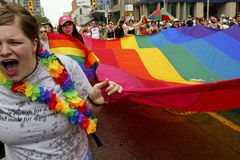