B.C. Finance Minister and Deputy Premier Kevin Falcon has cast doubts over his political future, despite a leadership-campaign commitment a year ago to run again "win or lose."

Mr. Falcon's indecision about seeking re-election comes on the heels of a high-profile defection from Premier Christy Clark's caucus, and it opens up fresh questions about Ms. Clark's efforts to hold together her Liberal party coalition.

"Before I make a major decision like that, I certainly would make sure I spend the time thinking about it and talking to my family," Mr. Falcon told reporters Wednesday. He said he hasn't made that decision yet.

In February, 2011, during the Liberal leadership campaign, Mr. Falcon challenged the front-runner, Ms. Clark, on her commitment to the party. "Christy, I've made a commitment to run in this election win or lose, so whether I win or lose [the leadership] I'm going to be a candidate for this party." He tried, twice, to exact a similar promise from Ms. Clark.

On Wednesday, he said he doesn't regret making that challenge, but the demands of his current job have changed his attitude. "As minister of finance, there are very, very long hours, there is travel, there are issues that you also have to factor into the final decision that you make."

Losing Mr. Falcon would be a major setback for the Clark government.

In her first cabinet shuffle after winning the party leadership, Ms. Clark named Mr. Falcon to the top post in her cabinet. It was a nod to his second-place finish in the leadership race. His appointment, however, also provided Ms. Clark, who has been a Liberal party member since she was 14 years old, an anchor on the conservative end of the party's spectrum.

Ms. Clark was already on the defensive this week after John van Dongen, a B.C. Liberal MLA of 17 years, quit the party and caucus to join the B.C. Conservatives, giving a leg up to the party that has been eroding the Liberals' base of support. That departure prompted Ms. Clark to declare she has the support of the rest of her caucus.

Still, a growing number of Liberal MLAs now say they are uncertain about running in the next provincial election, just 14 months from now. Education Minister George Abbott and former finance minister Colin Hansen both said Wednesday they are mulling their options.

"I haven't made up my mind on that important question," Mr. Abbott, another leadership contender, said in an interview. "I love what I am doing and thoroughly enjoyed my time here in Victoria," he said, but he isn't prepared to commit to running under Ms. Clark's banner.

Even some of those who say they intend to run again offered a caveat on Wednesday: Rich Coleman, the government House Leader and an influential party organizer, said he "absolutely" intends to run – except that he won't make up his mind for sure until six months before the next campaign. Transportation Minister Blair Lekstrom, who sat as an Independent until Ms. Clark succeeded in bringing him back into the party, said his intention "for now" is to seek re-election.

John Horgan, the opposition House Leader, said Mr. Falcon could have easily offered a similar, vague answer – had he wished to avoid feeding speculation about the state of Ms. Clark's leadership.

"It's strange the pillar in the conservative faction in the B.C. Liberal Party wouldn't be on board for the long term," Mr. Horgan said. "Saying 'I'm not sure' does not help Ms. Clark – it's not a ringing endorsement of the Premier."

Mr. Falcon maintained he is not undermining Ms. Clark's leadership. 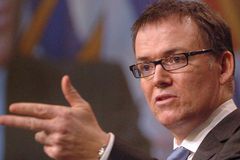