Attending high school in East Vancouver, Naveen Girn recalls only a single week dedicated to some of the great shames of this region: the Chinese head tax, Japanese-Canadian internment, and the Komagata Maru. When he later learned more about the Komagata Maru, a ship from India that was turned away in Vancouver, he developed a deep interest in the event – even if, at times, he became upset that South Asian history in Canada was often boiled down to this single incident.

This year, the 100th anniversary of the episode, Mr. Girn is helping to tell the story, which has become a passion for him.

He is overseeing the project Komagata Maru 1914-2014, a collaboration among eight institutions across the Lower Mainland to hold exhibitions and events. At the Surrey Art Gallery, Ruptures in Arrival: Art in the Wake of the Komagata Maru examines contemporary art dealing with the event – and more recent histories of mass migration from Asia to Canada's West Coast.

The Komagata Maru sailed to Vancouver in 1914, arriving in May. It had 376 passengers on board from Punjab, India – most of them Sikhs. They were British subjects, as were the Canadians they were hoping to join on this side of the Pacific. But Canada allowed only 24 to land. The rest, after two desperate months in Vancouver's harbour, were forced to return to India. By the time they got there, the First World War had begun and they were seen as potentially seditious. Some were shot and many were imprisoned.

A great deal has been written about the incident, but Surrey Art Gallery curator Jordan Strom says finding visual art about it was challenging.

"I thought that people would be able to pull works out and go, 'Yeah, I did this work about the Komagata Maru in 1987,' [for example], but there wasn't much."

Still, he has created an exhibition with thoughtful and powerful works by 10 artists from Canada and India, including local contemporary art luminaries Ken Lum, Roy Arden and Paul Wong.

Mr. Arden's 1989 work Komagata Maru is 18 archival photos documenting the incident. Two of the photos, taken the day before the ship was forced to leave, show members of the Shore Committee (local South Asians who were lobbying officials here on behalf of the passengers) climbing on board. They had brought supplies, as passengers were starving, having had no access to food for more than a week.

Indian artist Raghavendra Rao, who splits his time between Bangalore and Vancouver, captures this ladder-climb in his large-scale tarpaulin work, installed nearby, The Imaginary Landscape of the Komagata Maru: Visions of the Living Past.

"Hindu invaders now in the city harbor on Komagata Maru," reads one quote from The Sun.

Avantika Bawa, who divides her time between Portland, Ore., and India, where she is from, has created a large-scale installation that tracks the ship's route to Canada and back in separate lines on two large scrolls of canvas.

"I asked myself, what if I could just reduce that epic journey into a singular line, and remove any kind of context of land mass or the names of cities – what would that look like? And can we understand the gravity and the vastness of this whole experience through one singular line," she explained while working in the gallery on Thursday. "As I'm drawing these lines and mapping it out, even now, I'm in my own way imagining the stories of these people and what they might have been thinking."

Toronto-based filmmaker and new media artist Ali Kazimi has dealt with the issue in his documentary Continuous Journey, and a book, Undesirables. Now he has created Fair Play, an immersive 3-D installation that invites the viewer to imagine everyday life for South-Asian Canadians 100 years ago.

"The Komagata Maru story for me is fundamentally about race," Mr. Kazimi said. "It's a story also about how systemic racism gets played out. How systems are constructed to exclude people – which on the face of it seem fair, but everybody knows between the nudge and the wink what the real intent is."

Ruptures in Arrival: Art in the Wake of the Komagata Maru is at the Surrey Art Gallery April 12 – June 15. 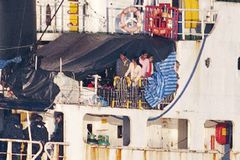 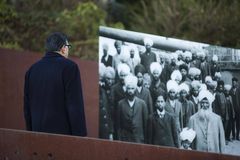 Ottawa ready to apologize for Komagata Maru incident
May 13, 2008
Follow Marsha Lederman on Twitter @marshalederman
Report an error Editorial code of conduct
Due to technical reasons, we have temporarily removed commenting from our articles. We hope to have this fixed soon. Thank you for your patience. If you are looking to give feedback on our new site, please send it along to feedback@globeandmail.com. If you want to write a letter to the editor, please forward to letters@globeandmail.com.
Comments