A veteran member of British Columbia's legislature is vowing to fight for First Nations and temporary foreign workers if she wins her bid to run for the NDP in this year's federal election.

Jenny Kwan announced her plans to seek the nomination in the riding of Vancouver East on Sunday, while surrounded by members of the diverse neighbourhood's aboriginal and Chinese-Canadian communities.

"What we need is someone who is fearless in Ottawa to take on the Prime Minister," she declared in her speech. "Some might say I am a fighter and I'm not afraid to take on Stephen Harper."

The former city councillor was elected to the legislature in 1996 and subsequently became the first Chinese-Canadian to sit in the provincial cabinet. She has served as community development minister and municipal affairs minister.

The federal seat opened up after high-profile New Democrat MP Libby Davies announced last month she will not run again. The riding is a long-standing NDP stronghold, and the race for the coveted nomination is shaping up to be a tight one.

Ms. Kwan will square off against a fellow member of the legislature, Mable Elmore, who represents Vancouver-Kensington in the legislature. Ms. Kwan praised her opponent on Sunday, telling reporters she expects a tough fight.

"I think Mable is a good MLA and I think this ultimately will be an intense race, there's no question about it," she said. "No matter what happens, we have to be committed. And I am committed to ensure that Vancouver East remains with an NDP representative."

Vancouver East is among the poorest federal ridings in Canada. Its troubled Downtown Eastside area has seen high rates of missing and murdered aboriginal women, and Ms. Kwan made that issue a major focus of her announcement.

"I believe that Jenny Kwan was born with purpose, and that purpose was to make this a better world. And I believe that her going to Ottawa as the MP for the Downtown Eastside is just simply part of her fulfilling her purpose," he said.

Ms. Kwan promised that if she made it to Ottawa, she would push for an inquiry into missing and murdered aboriginal women. "How many more indigenous women and girls have to go missing before we have a national inquiry?" Ms Kwan asked. "If this were happening with any other community, would it be tolerated? Absolutely not."

She also spoke about the importance of affordable childcare, saying that she is proud to support an NDP plan for a $15-a-day national childcare program. Temporary foreign workers were also a focus of her speech. The politician said she would like to see a clear path to citizenship for such workers as well as fair treatment by employers and government.

Ms. Kwan was one of only two New Democrats re-elected in the 2001 B.C. election when the provincial Liberals toppled the NDP from power and won every other seat in the legislature.

The politician's long tenure in the legislature has not been without controversy. Last year, she wound up repaying $35,000 for European and Disneyland trips for her family that had been initially paid for by the Portland Hotel Society. Her ex-husband, Dan Small, was a former executive of the society, which was publicly funded to provide social services to residents of the Downtown Eastside. Ms. Kwan told reporters on Sunday that the matter is a "deeply personal issue" that she has handled.

"What I heard from the people in the community and what they've said to me is that they want me to move forward and to seek the nomination," she said. "Ultimately, the people will see my record and the work that I've done and they'll make their decisions." 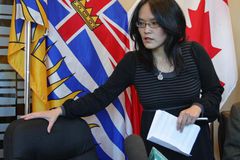 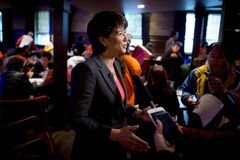