Several areas of the Lower Mainland have geology strikingly similar to that of Oso, Wash., where a wall of mud wiped out much of the community in late March, killing as many as 45. While past tragedies have forced some B.C. municipalities to face the risks and become leaders in prevention, others are still catching up.

The ground gave way in a mountainous area of the District of North Vancouver just after 3:30 a.m. on Jan 19, 2005. Two homes were swept away as a 25-metre-wide tide of rocks and dirt fell 90 metres down a steep slope. Eliza Kuttner's body was found 10 hours later.

"It was a real eye-opener for us to what can happen in an urban area so close to nature," said Fiona Dercole, the district's section manager of public safety.

After a number of landslides over the past half-century, the district embarked on an aggressive program to avoid tragic situations in the future.

But there are no provincial standards in B.C. to judge the risks of slides, allowing a patchwork of standards to emerge across high-risk areas. Two such areas in the Lower Mainland are in the Chilliwack Valley and in the Hatzic Valley, east of Mission.

"They have the same geography and the same weather patterns in similar rural areas as Oso. There have been slides in the past that have caused property damage," said John Clague, the chair in natural hazard research at Simon Fraser University.

Four days after the Oso disaster, a letter sent by a ratepayers group in the Hatzic Valley warned the B.C. forestry ministry of 30 studies looking at "slides that have occurred and slides that are waiting for the right circumstances to happen. No one seems to be paying any attention."

Officials with the Fraser Valley Regional District say they are still in a "constant state of learning," as they continue to draft regulations that can pro-actively manage developments in risk areas.

Pinpointing the exact mountain that might be at risk of collapse is still hard for experts, despite new satellite and radar-based systems that provide them with new tools that can detect shifts as small as a few millimetres.

"I wish I could say it was definitive and that we have a great action plan, but it's always moving and we are acting on it," said Paul Gipps, the chief administrative officer for that area that includes both Chilliwack and Mission.

Much of the district's focus has been on educating new homeowners and developers of the risks they could be facing if they choose to build near potentially unstable slopes, leading to "surprised faces," Mr. Gipps said.

But the tragedy in North Vancouver prompted a slew of new regulations. New buildings must be 10 times safer when dealing with landslide risks. New vegetation is added, homeowners are no longer allowed to build artificially large yards by building on slopes and storm water can no longer be dumped down backyards. Slope drainage is now a household term in the district.

"They are a leader in the country," Mr. Clague said. "We now have a very low tolerance in Canada for risk from natural hazards."

After the slide, every home built on a slope in the district was examined. A few of the homes were found to present an unacceptable risk, including many of Ms. Kuttner's neighbours. Those situations were fixed immediately. The ones deemed to be facing a "tolerable" risk were given more time to get fixed.

"We keep an eye on them and as they come forward for building permits or development we take steps to reduce risk further," Ms. Dercole said. "With the new rules we want people to build to fit the site and not try to fit the site to the building."

Like Oso in Washington State, much of southern B.C. is built on unstable sand and silt left behind as glaciers retreated thousands of years ago. When that geography is found in valleys with steep slopes, landslides can be a common occurrence.

The two largest landslides in Canadian history were in southern B.C. The largest slide was in 2010 when the face of Mount Meager fell, carrying 48 million cubic metres of rocks and dirt, temporarily blocking the Lillooet River. 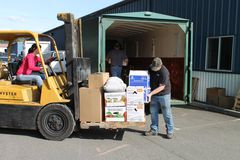 What I saw from the front lines of Oso’s mudslide and Lac-Mégantic’s inferno
Subscriber content
April 3, 2014 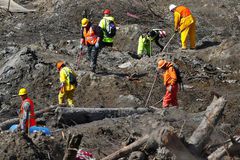