Canadian pot tourists are hoping the legalization of marijuana sales in Washington state will ignite similar changes north of the border – but they aren't sweating the details.

One man from Victoria was in Washington state on vacation Tuesday and decided to line up outside the Top Shelf Cannabis store in Bellingham to "be a part of history" and take in the first day of legal pot sales in the state.

Canada will legalize pot "all in good time," predicted Greg from Victoria, who didn't want his last name used. "Canada seems to lag in accepting things that get accepted in the U.S. We're more cautious."

He was joined by fellow Canadian Keith from Surrey, B.C., who also didn't want his last name used.

Keith, who was on a two-week family vacation in Bellingham that coincided with the opening of the shop, said he's hopeful Canada will follow suit.

"A lot of Canada's rules and regulations stem from the States."

At Top Shelf Cannabis in Bellingham, owner Tom Beckley said more than half of his customers on the first day of sales were Canadians, mostly from the Vancouver area. Others hailed from Kamloops and Penticton, B.C.

"I think it's just something new for them," said Mr. Beckley. "They're making history along with us."

But a number of American residents on hand for the opening – particularly those who have lived north of the border – suggested there continues to be more stigma around pot use in the U.S. than in Canada.

"My experience in Canada is weed is so plentiful and there's so much of it … that even without the words on the dotted line, or on the page, I feel that it's still more legal there," said Boris Budd, who owns a condo in Vancouver and has lived in B.C. for stints of time.

"There's so much bureaucracy and red tape based upon the [state] laws that we still have to see how things are going to unfold. For example, they're talking about prices being $25 a gram here eventually, and in my opinion that ensures a burgeoning black market in Washington state because nobody pays that much."

James Bird, a Bellingham resident who spent four years living in Surrey, B.C., said Washington state still has a long way to go before Americans embrace marijuana use the way their neighbours to the north have.

"Here you can only smoke in your house, so I don't see the kind of attitude like they have in B.C. coming to Washington at all," said Mr. Bird. "If you're sitting in a park [in Washington] and a cop walks by, you're getting a ticket."

The end of "prohibition," as many were calling it, marks a major step that has been 20 months in the making. Both Washington and Colorado voted in November, 2012, to legalize pot sales for adults over 21, and to create a system for growing, selling and taxing the plant. Sales began in Colorado on Jan. 1.

Washington issued the first 24 retail marijuana licences on Monday, but not all businesses were ready to kick off sales the next day. Pot proprietors have been given little time to prepare, leaving many observers predicting that product shortages and high prices will accompany the launch.

The day before the opening, Mr. Beckley was frantically putting the final touches on his Bellingham shop, including installing the toilet and the sink in the shop's bathroom.

Mr. Beckley said he had secured more than 10 kilograms of marijuana before Top Shelf Cannabis opened its doors – and he hopes it's enough for everyone who wants some.

"It's history," said Mr. Beckley. "Everyone wants a piece." 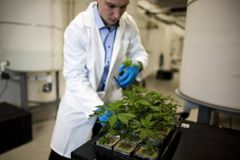 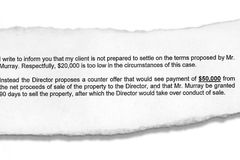 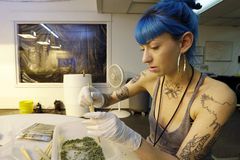