British Columbia's New Democrats are promising to give renters $400 a year to offset increasing rates, as the costs of housing and other affordability issues drive the early days of the provincial election campaign.

Housing has been a growing area of concern in the province, particularly in the Vancouver region, where purchase prices have jumped by as much as 40 per cent in a single year and low vacancy rates have pushed up rents. Many renters now spend more than 50 per cent of their income on shelter.

The NDP's latest answer to the housing crisis is a $400 rebate for all households that rent, regardless of how much they spend on housing or their income. The Liberals immediately criticized the plan, saying the focus should instead be on helping low-income renters and creating affordable housing.

NDP Leader John Horgan, on the second day of the campaign for the May 9 vote, said the Liberals have been ignoring renters for 16 years.

"The message from the BC NDP today is that help is on the way," Mr. Horgan said Wednesday during a campaign stop in downtown Vancouver.

Mr. Horgan did not say how much the rebate program would cost. Census data from 2011, the most recent year available, show there were 524,995 renter households in B.C., meaning the rebates could be worth more than $200-million a year.

Mr. Horgan compared the proposal to the province's homeowner grant, which provides a $570 break in property tax to people who own homes worth less than $1.6-million.

"If homeowners can have a homeowner grant, renters should be able to have a grant as well."

BC Liberal Leader Christy Clark criticized the NDP's proposal, saying a renter's credit would line the pockets of wealthy tenants who live in penthouses in downtown Vancouver.

"That isn't right," Ms. Clark said at an event in Burnaby. "We shouldn't be redistributing our tax money to the very rich."

Ms. Clark noted the province already provides a rental subsidy to more than 100,000 low-income renters. She also said the province has earmarked $1-billion for new affordable housing, and that her party would work with cities to speed up development.

"If there is not enough rental housing in the province, it's partly because we still need cities to get to work and zone more rental housing," she said.

Mr. Roy, chief executive of the BC Non-Profit Housing Association, said the grant would make a difference for people who have seen their rent go up. But he said the New Democrats should consider adding a rental-rate cap to the credit, similar to the homebuyers grant, so it remains focused on lower-income earners who need it the most.

Mr. Roy is also behind a new strategy outlined by the BC Rental Housing Coalition that calls for a significant increase in rental and affordable housing development, adding he'd like to see the NDP and other parties support it.

Mr. Horgan also said an NDP government would provide more resources for renters to file complaints through the Residential Tenancy Act and address "renovictions," forbidding landlords from using renovations as an excuse to evict tenants and sidestep restrictions around rent increases.

The Liberal government has spent the past year implementing housing policies. They include a 15-per-cent tax on foreign buyers in the Vancouver region, allowing the City of Vancouver to tax vacant homes and a loan program for first-time buyers. The Liberals have also increased the eligibility threshold for the homeowner grant to $1.6-million, from $1.2-million, after a dramatic increase in the assessed value of homes, which would be taxed at higher rates.

Canada Mortgage and Housing Corp. says the median rent for a two-bedroom apartment in the province was $1,100 in October, 2016. In Vancouver, the median rate was $1,661. Provincewide, the vacancy rate is 1.3 per cent, and 0.8 per cent in Vancouver. 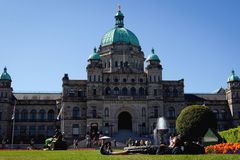 B.C. political parties roll out platforms ahead of election campaign
April 10, 2017
Follow us on Twitter @globeandmail Opens in a new window
Report an error Editorial code of conduct
Due to technical reasons, we have temporarily removed commenting from our articles. We hope to have this fixed soon. Thank you for your patience. If you are looking to give feedback on our new site, please send it along to feedback@globeandmail.com. If you want to write a letter to the editor, please forward to letters@globeandmail.com.
Comments