Things That Work: The Globe and Mail looks at businesses, services and other projects in British Columbia that aren't often talked about because they actually work.

Nobody decides to become an artist for the money, but being able to make the rent would be nice.

In a city such as Vancouver, high rents and a low vacancy rate do not paint a pretty picture – particularly for artists, who need a place to live as well as a studio space in which to work. Solutions can be trying and not always conducive to one's artistic practice – finding a roommate, sharing a studio, getting a day job or, yes, leaving town. And size restrictions imposed by space issues can also limit the kind of work an artist produces.

The Vancouver-based artist says her studio "was very crucial" in creating the pieces. For one thing, it was big enough.

Her place has 1,075 square feet over two levels, with a bright living space upstairs and a studio space below with very high ceilings. In the living area, the windowsills are lined with plants, there's a full kitchen – including a dishwasher – and room for a large dining table, couch, bed and more. Downstairs, there's a large custom-built work table on wheels, generous storage space for paintings and sculptures, a shelving system for textiles and all kinds of floor space, where even large works, such as True Grey, can be easily laid out.

Ms. Heslin is one of the beneficiaries of the City of Vancouver's Artist Live-Work Studio Awards Program, which grants spaces to Vancouver-based artists at low or no rent based on financial need and artistic merit.

There are currently seven studios in the program – two work-only and five live-work spaces. Two are awarded at no cost and the other five at significantly reduced rents for three-year terms.

It's enough time, Ms. Heslin says, to make a difference in an artist's practice – and the cost is liberating. Previously, she paid about $1,000 for her apartment and separate studio space, which she shared. In the new space, she's been able to work with thicker, stronger materials. And the washer and dryer in the unit have helped enormously with the dying that is crucial to her practice.

"I used to do my dying in a shared studio in a dark corner," she says. "It was so messy, and I didn't have [enough] space."

She adds: "It's a luxury to be able to play music without listening to headphones, or listen to the radio – that's the thing that you don't get to do when you [share]."

It's also a luxury to be able to fit a table into a space rather than work on a cement floor – which she did previously, giving her knee problems.

The live-work situation has served her well during a prolific period. It's been a busy year: In addition to her work in the VAG show, she had a solo show at the Monte Clark Gallery in Vancouver, the Esker Foundation in Calgary and the McMichael Canadian Art Collection in Kleinburg, north of Toronto.

"Being on deadline," she says, "you end up pulling all-nighters, and it's really hard doing that in the studio when you don't have a place to have a rest or even places that would be open for food … just really basic needs when you're working long hours. So it makes those sorts of pressure points more comfortable."

Other recipients of the studio awards include: Steven Shearer (1999-2002), who went on to represent Canada at the Venice Biennale in 2011; Myfanwy MacLeod (2002-2005), whose subsequent work includes the 2010 sculpture The Birds, the large sculpture in Olympic Village Plaza, and who also had a solo show at the VAG in 2014; and playwright/director Amiel Gladstone (2012-2015), who this year premiered the critical and commercial hit Onegin, which he co-created with Veda Hille.

Coincidence? It's impossible to know, but having the physical space to work – as well as the metaphorical space to breathe without worrying about paying stifling Vancouver rents – surely must have a positive impact.

Seven spaces hardly meet the demand, of course. The city knows that and is working to expand the program. Ms. Heslin hopes opportunities are also created for young, emerging artists, who need them most.

"It's hard to pay your studio and your rent, especially in those early years," she says. "You go for years and years and years without making any money [from] what you're doing. Oftentimes it's at least 10 years. And for me, it was more."

She has about a year left in her space and is considering where to go next. The intake for the 2018-2021 studio term will be next fall.

"It has changed my life for the better in a very sort of surprising way," she says. "And then it affords you the space to dream up the next thing." 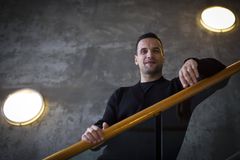 Vancouver artist Douglas Coupland finds van Gogh look-alike for sculpture
November 16, 2016
Follow Marsha Lederman on Twitter @marshalederman
Report an error Editorial code of conduct
Due to technical reasons, we have temporarily removed commenting from our articles. We hope to have this fixed soon. Thank you for your patience. If you are looking to give feedback on our new site, please send it along to feedback@globeandmail.com. If you want to write a letter to the editor, please forward to letters@globeandmail.com.
Comments