Internal B.C. government documents warn that the pursuit of a liquefied natural gas industry could double the province's entire output of greenhouse-gas emissions – at a time that it's struggling to meet its legislated targets to dramatically reduce GHGs.

A cabinet document prepared for Environment Minister Mary Polak in June calculates the LNG sector could increase emissions by 16 per cent at a minimum, and as much as "a doubling of B.C.'s total emissions, depending on the number of plants and the technology and energy options chosen," the document states. "At the high end of that range, B.C.'s natural gas sector emissions would be comparable to those from Alberta's oil sands."

The B.C. Liberal government under Premier Christy Clark has put LNG at the forefront of its economic agenda. Ms. Clark said Tuesday she won't let the climate-change agenda set by her predecessor, Gordon Campbell, stand in the way.

"In terms of greenhouse-gas emissions, we can either decide that we want to get to 'yes' or we are going to throw up barriers in the way of that that will ensure we don't have a natural-gas industry in British Columbia," she told reporters during a news conference. She said B.C. would "do the world a favour" by helping countries like China to switch from energy derived from coal to the cleaner LNG, and that should count for something. "We're pursuing a strategy that includes the recognition of greenhouse-gas emissions around the world and our contribution to reducing that really matters."

Ms. Clark's government is putting the final strokes on a taxation regime that would apply to the LNG industry, and has refused to release its own assessments of the impact of LNG on its climate change law, which requires the province to reduce its total emissions by a third of 2007 levels by the year 2020.

"It's still a work in progress," said Ms. Polak in an interview on Tuesday. She said negotiations with potential LNG investors continue to determine how to reduce the industry's environmental footprint. "It's staff's job to outline the magnitude of the challenge, but I don't think the magnitude of the challenge should have us shrink away from it."

Since the province set its ambitious targets in 2008, it has reduced carbon-dioxide emissions from 66 million tons to 62.2 million tons in 2011 – the most recent figures available. That means it has taken five years to cut 5.8 per cent of the province's output.

The cabinet briefing document was obtained through a Freedom of Information request by the B.C. NDP environment critic, Spencer Chandra-Herbert. The 600-page document was prepared by ministry staff in advance of the May, 2013, election to bring the new minister up to speed on the challenges ahead.

It advises that the province is "within reach" of its 2012 interim targets, but things are expected to veer off track after that. "There are key challenges to meeting subsequent targets," the document says. "In the absence of new climate actions, we can expect emissions to begin to grow again as the economy grows and new projects are developed."

In an interview, Mr. Chandra-Herbert said the government needs to make a strong commitment to adopt the cleanest LNG technologies available, rather than allowing the energy-intensive industry to derive most of its power from burning natural gas.

"The government has to release what they know," Mr. Chandra-Herbert said Tuesday. "They are negotiating a royalty regime with industry but we need to discuss the tradeoff."

The B.C. NDP also supports the creation of an LNG industry, he said, but the government needs to set strict controls on how it is done. "I want the jobs, I want the revenue. But I want to do it in an environmentally sustainable way." 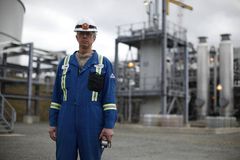 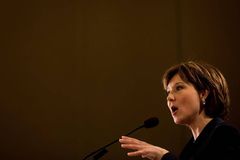