The local government that would need to approve any new development atop Grouse Mountain is warning that the site is an "ecologically sensitive" area and those concerns must be respected following the resort's sale to a Chinese firm.

The Globe and Mail reported Wednesday that China Minsheng Investment Group (CMIG), that country's largest privately owned investment manager, which has close ties to China's government, is expected to pay about $200-million for Grouse Mountain. Grouse, which is owned by the McLaughlin family, is one of several mountains on the north shore of the Burrard Inlet that tower over Vancouver. It is home to a ski resort, restaurants and other attractions, such as a zip-line system.

Mayor Richard Walton of the District of North Vancouver said he has heard musings over the years about hotel construction at Grouse that includes close to 500 hectares of private land, attracting 1.3 million visitors a year.

However, he said there would be major environmental issues with such projects because of watershed issues. "The more people you put up there, the more human activity, the more compromised the environment might get," Mr. Walton said in an interview.

Mr. Walton said most of the buildings on Grouse are associated with outdoor recreational activity in summer and winter. In general, he said there is a 12-metre height limit on buildings on the site, except where exempted.

A briefing document provided Thursday by the district said Grouse Mountain Resorts is located in an area zoned for parks and recreation. It says a withholding motion is in place that prevents new camp grounds, stadiums and trailer parks from being constructed without district approval.

The overview says the mountain is an "ecologically sensitive area with an old growth forest and amazing habitat for a variety of B.C.'s flora and fauna," so it's protected by guidelines intended to steer construction away from sensitive ecosystems and minimize impact of new construction and users of new facilities.

"That said, environmental regulations have not prevented new facilities from being constructed on Grouse Mountain, but together with Grouse Mountain's own 'Blue Grouse Policy' we have worked to ensure new projects minimize environmental impacts and preserve the existing ecosystem," the document says.

Mr. Walton said Grouse has been a major employer and part of the community.

"It's part of our psyche in a sense," he said. The mayor said he has had no confirmation of the sale beyond The Globe's reporting. He said he hoped any new owners would be mindful of neighbourhood or local concerns.

As for the resorts being purchased by a company from China, Mr. Walton said his only concern is that the new management melds its investment concerns with the interests of the community of the district. "If the management decisions are being made elsewhere and on the basis of financial returns, those need to be obviously balanced with a very good understanding of regional expectations," he said.

CMIG was launched by Chinese Premier Li Keqiang with about $9-billion of capital, and designed to function as Beijing's version of New York-based asset manager Blackstone Group, investing in such sectors as real estate, hospitality, health care, technology and finance. Minsheng means "the people's welfare" in Chinese, and the fund manager has close ties to China's government. The group's chairman and its vice-chairman are Communist Party insiders who sit on a body that advises Beijing.

David Stuart, chief administrative officer for the district, said much of the resort's operations reside on land leased from Metro Vancouver, which would, as a result, have an interest in any proposed changes. Of the future, he said if the new owners were proposing any changes to the business model, "we would want to understand better what that transportation, environmental and community impact might be."

Current Grouse owners, the McLaughlin family, acquired Grouse Mountain in the early 1980s when the resort was in receivership.

Jonathan Wilkinson, the Liberal MP for North Vancouver whose riding includes the resort, said in a statement that "if this transaction proceeds, I think all North Shore residents will be somewhat saddened by the loss of local ownership." While he wrote that he has not had a chance to review details of the sale, he said it is his understanding that the proposed transaction won't affect current operations or staffing. "This is of importance for a number of reasons – not the least of which being the fact that the resort has been a strong employer of young people in our community."

A foreign takeover of Grouse is unlikely to activate a review by Ottawa because the projected dollar value is less than the regulatory minimum of $1-billion. The sale would be the latest in a series of acquisitions of Canadian assets by Chinese firms. The China Institute at the University of Alberta found Chinese investment in Canadian commercial real estate totalled $3.4-billion in 2016, up sharply from $32-million in 2013. Over the past year, Beijing-based insurer Anbang acquired a stake in Vancouver-based retirement-home chain Retirement Concepts for an estimated $1-billion and an office tower in Toronto for $110-million. 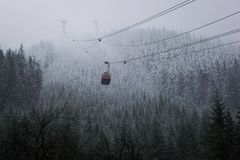 Canada-U.S. softwood deal possible by next month: forestry analyst
July 13, 2017
Follow Ian Bailey on Twitter @ianabailey
Report an error Editorial code of conduct
Due to technical reasons, we have temporarily removed commenting from our articles. We hope to have this fixed soon. Thank you for your patience. If you are looking to give feedback on our new site, please send it along to feedback@globeandmail.com. If you want to write a letter to the editor, please forward to letters@globeandmail.com.
Comments