Bound by confidentiality agreements, neither side in the ongoing saga involving the University of British Columbia and recently departed president Arvind Gupta have shed any light on precisely what happened to precipitate his shocking July departure.

Dr. Gupta was barely a year into a five-year term. With a background in computer science and innovation, he was brought in without the usual administrative experience university presidents possess. He was an unusual choice except when you consider that he had a mandate to reimagine how the university functioned, to be a disrupter who wasn't afraid to smash sacred cows and challenge the status quo.

We now see what happens when you attempt that.

In the absence of any cogent explanation as to why Dr. Gupta left, the university community has been left to guess what might have gone wrong. Nature abhors a vacuum; so does a university controversy. In the absence of real information, the Gupta affair has been choice grounds for rumour and innuendo. But based on conversations I've had with people who have some knowledge of the situation, it would seem that suppositions that Dr. Gupta made enemies among certain administrators inside the school are correct.

The reason this might have happened is simple. Mr. Gupta looked at some numbers and began questioning them. For instance, in 2009-10, total faculty at UBC's Vancouver campus numbered 3,242. By 2014-15, that figure had only increased by 28, or 0.9 per cent. Now let's look at staff, specifically the category of management and professionals, which includes everything from admissions specialists to vice-presidents of various departments – but not deans. In 2009-10, this group totalled 2,903; in five years it had ballooned to 3,640 – an eye-popping increase of 25 per cent. Meantime, clerical and support staff were cut over that period.

There is little wonder Dr. Gupta thought it was high time there was a reallocation of resources, a realigning of priorities.

Look at this another way: When you take faculty at UBC's Vancouver campus as a whole, including sessional lecturers, librarians and others, it totals roughly 4,700, according to information provided by the university. That compares to 9,500 members of staff. Now let's examine another first-rate university in Canada, the University of Toronto, which has 13,000 faculty versus 6,500 staff. In other words, UBC has a 2:1 staff-to-faculty ratio, while Toronto has a 1:2 ratio.

If you want to know what happened to Arvind Gupta, this is a good place to start. In tight budgetary times, a good university president has to look at available resources and sometimes reflect on how they can be reallocated. I don't think there is any question that Dr. Gupta was pro-faculty; after all, he was a UBC prof before he became president. When he started to talk openly about taking resources from administrators, threatening the impressive little fiefdoms many of them had built up over the last five years, alarms sounded.

I have little doubt that some of those who felt most threatened by Dr. Gupta's plan went to members of the board of governors with their concerns. Blind to the logic of Dr. Gupta's vision, and loyal to an administration it knew well, the board decided it would be best for all concerned if the new guy left.

It should be a lesson to anyone who follows in his footsteps.

The university, of course, just wants this story to go away. That's why it asked Dr. Gupta to sign a confidentiality agreement, so he wouldn't discuss what happened. The board of governors acts as if its hands are tied; otherwise, you know, it would love to tell the world what happened. Right. What it should do is release Dr. Gupta from the bonds of a gag order he likely regrets signing.

But it won't. Instead, it's going to pretend there isn't a problem. Interim president Martha Piper penned an op-ed piece that ran in the Vancouver Sun on Monday that was truly breathtaking in its naivete and lack of appreciation of the crisis her school is facing. She mentioned the Gupta controversy in passing, offering little empathy to those wondering why a school built on the foundational elements of openness and transparency can continue to be so opaque and secretive about this matter.

As much as Dr. Piper may want to sweep this matter under her office rug, it will be difficult to do. She should, instead, be alive to the deep discontent that lingers in many parts of her campus, among many people critical to the university's success.

Editor's note: This article compares the number of total faculty of the University of British Columbia with that of the faculty of the University of Toronto, and says that UBC has a 2:1 staff-to-faculty ratio, while the U of T has a 1:2 ratio. However, UBC does not include clinical staff as faculty, while U of T does so. If the faculties were compared on the same basis, the ratios would be considerably closer.

How UBC lost a president a year after they hired him
August 26, 2015 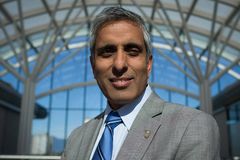 Province needs to step in to shed light on departure of UBC president
August 24, 2015