One of the world's great migration mysteries – how salmon find their way home from the distant ocean – may have been solved.

Researchers studying the movement of sockeye salmon from British Columbia's Fraser River say the fish are imprinted with a magnetic map when they are juveniles. And they later use that map as adults to read the Earth's geomagnetic field, which guides them back from the North Pacific to the river mouth.

"Our paper clearly shows … very small changes in magnetic strength and intensity correspond to changes we see in the migration routes of the fish," said Nathan Putman, a post-doctoral researcher at the University of Oregon.

"To find their way back home across thousands of kilometres of ocean, salmon imprint on the magnetic field that exists where they first enter the sea as juveniles. Upon reaching maturity, they seek the coastal location with the same magnetic field," he said.

Dr. Putman's team focused on Fraser River sockeye because of an unusual trait. With Vancouver Island blocking a direct route back to the Fraser River from the Gulf of Alaska, migrating fish must choose whether to return through Queen Charlotte Strait in the north, or through the Strait of Juan de Fuca in the south.

Scientists and fishermen have long speculated on how environmental factors, such as ocean temperatures or the velocity of ocean currents, might affect that choice.

But Dr. Putman found a strong correlation between the route chosen by the fish and the geomagnetic field, which naturally drifts because of the movement of the Earth's liquid outer core.

"We found that the proportion of salmon using each route was predicted by geomagnetic field drift: the more the field at a passage entrance diverged from the field at the river mouth, the fewer fish used the passage," states the paper, published Thursday in Current Biology.

Dr. Putman said it has long been known that salmon use the Earth's magnetic field as a sort of compass, to help them determine north and south. But the study shows sockeye using the magnetic signals in a much more precise manner, like a map or an inner GPS, to pinpoint their location in the open ocean, relative to the mouth of the Fraser River.

Dr. Putman said the findings raise some troubling questions about the long-established practice of putting magnetic, coded-wire tags in the noses of juvenile salmon. Each year on the Pacific Coast more than 45 million salmon and steelhead are tagged so that U.S. and Canadian fisheries managers can determine the origin of fish caught at sea.

Dr. Putman said it is possible those tags could interfere with the ability of fish to read the geomagnetic field.

"All the signs are pointing to this being a potential problem," he said, although he added that more research is needed before firm conclusions are drawn.

He also said hatchery fish, which have a lower survival rate in the ocean, might be having their inner maps "scrambled" by the iron piping and electrical wires that surround their tanks.

Dr. Putman said his findings have a practical application, because they can help B.C. fisheries managers predict which migration route Fraser sockeye will follow.

And with more research, he said, it should be possible to use magnetic-field data to determine where salmon are going when they migrate far offshore. Currently, the North Pacific is seen as a "black box" into which the salmon vanish before returning years later. 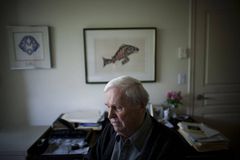 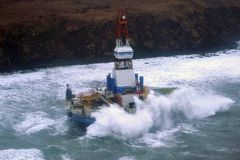 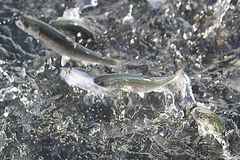