For decades, Neptune Bulk Terminals has been a workaday fixture on Vancouver's North Shore, the last stop for commodities such as coal and potash before they are loaded onto tankers destined for overseas markets. More recently, Neptune has been in the eye of a storm kicked up by growing public concern over B.C. coal exports.

Coal has long been shipped through Vancouver, but a flurry of projects could increase volumes. In January, Neptune got a permit to hike its coal-handling capacity to 18.5 million tonnes a year from 8.5 million. Fraser Surrey Docks has applied to build a facility that could handle up to four million tonnes of coal a year, and Delta-based Westshore Terminals in February announced $210-million worth of capital upgrades that, along with previous improvements, will bump its coal capacity to about 33-million tonnes a year.

Voters Taking Action on Climate Change, an environmental group, has spearheaded a campaign against rising coal exports and got support from local politicians and health groups. The Globe spoke to Neptune president James Belsheim this week.

Why is Neptune expanding?

It seems that Neptune and its expansion have become caught up in larger debates, including one relating to Port Metro Vancouver's authority to review projects. Are you caught in the middle of a bigger discussion?

There are a number of big discussions. But I can tell you our review process was very comprehensive. It involved a significant amount of public consultation, [and] it involved environmental impact and archaeological impact reviews, so it's been quite comprehensive. We had an open house that about 650 people attended. And we extended invitations to show off our terminal, which we are pretty proud of.

That process sounds very local. Those who object to increased coal exports say your expansion is not just local, but has repercussions for the Lower Mainland and for the province. Did you take those concerns into account?

We are local and we are very strong about being a good neighbour inside our local community. Everything we do reflects that those neighbours are important to us. Remember, we have been in business for 40 years. We've been doing this a long time.

You have emphasized that Neptune ships metallurgical, or steel-making coal, rather than thermal coal used to generate electricity. What's the difference?

All of our coal is steel-making coal. It is all-Canadian, high-quality coal transported by Canadian railways and those railways have been handling it a long time and it's all done very well. Our job at Neptune is to do an excellent job at our terminal. Vancouver has handled coal for many years and there are all sorts of important economic issues associated with that. The steel-making coal handled at our terminals is shipped to the large steel mills in Japan, Korea and China.

Critics cite emissions associated with coal use as the biggest reason for reining in coal exports. Do you take carbon emissions into account in running your business?

Greenhouse gas is an important issue. We have made improvements at our terminal [to reduce emissions]. Steel-making creates emissions, but steel is a long-lived product. And steel is part of the solution: You need steel to make a bicycle, to make rapid transit – all of which is important and can have some strong environmental benefits.

What kind of measures do you take to control dust?

We have an extensive system relying on water and misting to ensure no coal dust is generated. We also have a technique of a spray fog curtain to ensure nothing leaves our property. We wouldn't be handling coal if we weren't sure of health concerns for our employees and community.

There are people who say that given the environmental impact of coal, in both steel-making and energy production, we should be trying to move away from coal. That's a government policy issue – but do you have a viewpoint on that? 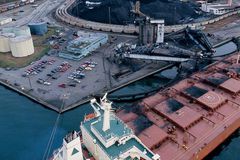