A Vancouver man beaten by undercover police in what was later described as a case of mistaken identity has hired a well-known civil-rights lawyer who has warned that his client will sue the city.

Yao Wei Wu, 44, was beaten by two plainclothes police officers who came to his home last week to investigate a report of domestic violence. But they got the wrong home.

Mr. Wu suffered fractures in the bones around an eye as well as bruises to his knees and back. His wife and children witnessed the attack.

A letter sent from lawyer Cameron Ward to the city clerk states that he has been retained by Mr. Wu. "Please be advised that Mr. Wu will be commencing a claim for damages for personal injury against the City of Vancouver and those responsible," the letter says.

Mr. Ward was not available to comment. The letter was released by a group of Chinese Canadians who have been assisting Mr. Wu.

Mr. Wu, a married contractor with two children, speaks little English. In an interview with CTV news last week, Mr. Wu said through a translator that police rang his doorbell in the middle of the night. When he opened the door, the officers yanked him outside and beat him.

After the television interview aired, police said they had personally apologized to Mr. Wu, adding that a senior Cantonese-speaking police sergeant and an inspector visited the family and listened to Mr. Wu's account of events.

An internal investigation was also launched and one of the officers who arrested Mr. Wu was reassigned to desk duties.

A Vancouver police spokeswoman said Thursday that police would not comment on the letter.

Ms. Lao also rejected accusations from some members of the Chinese community that the agency has sided with police in the Wu case.

A group of Chinese Canadians, led by Gabriel Yiu, rallied to Mr. Wu's defence after the attack.

Mr. Yiu said SUCCESS should be concerned with assisting Mr. Wu, providing him with translation and helping him find a lawyer - not holding news conferences with the police.

Mr. Yiu said Mr. Wu has psychological wounds from the attack. He also said Mr. Wu told him that police invited him to Friday's news conference. 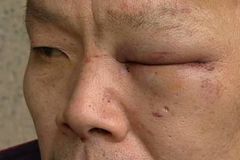