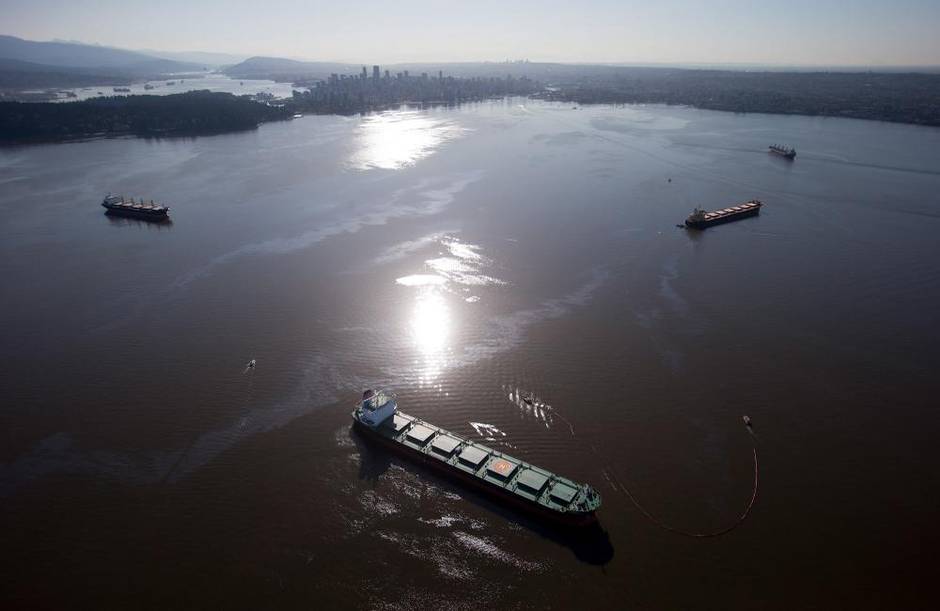 
A fuel spill in Vancouver's picturesque English Bay has raised serious questions
about the federal government's ability to respond to a marine oil spill.
Justine Hunter pieces together what happened


Dangerous goods
What is Bunker C?

Also known as fuel oil No. 6, Bunker C is the standard fuel used on marine cargo ships around the world. It is a heavy, viscous petroleum-based fuel that is considered highly toxic and potentially harmful to humans and aquatic life.

What happens when it spills?

In addition to leaving a slick on the water, Bunker C forms into tar balls that can be carried in the water for hundreds of kilometres. In the case of the English Bay spill, Bunker C oil was detected at least 12 kilometres away. It can also sink several metres below the surface. Unlike gasoline or diesel, for the most part Bunker C does not evaporate; only 5 to 10 per cent is expected to evaporate in the first several hours following a spill. In previous spills, Bunker C has been detected decades later.

The sloop Odin set out from False Creek late on the sunny afternoon of April 8 for a pleasure sail, with the two-man crew, Rob O’Dea and Arnt Arntzen, using a steady northwest wind to tack their way around the transport freighters that use English Bay as a parking lot.

Around 4:45 p.m., the pair aboard Mr. Arntzen’s 21-foot sailboat spotted a large slick on the water, accompanied by the smell of fresh asphalt. It took them just 15 minutes of sailing to track the source to the bulk grain carrier MV Marathassa, which was at anchor in the bay after putting in to the Port of Vancouver to begin loading its cargo.

By then, the slick was half a kilometre long and 250 meters wide, by Mr. O’Dea’s estimation. Beneath the blue sheen, he could see the water was thick with globules of oil.

Mr. O’Dea called 911 at 5:05 p.m. from his cell phone, and a Canadian Coast Guard official called him back three minutes later to assure him they were already aware of the spill and had dispatched a pollution response team.

That would have been reassuring, except there was no Coast Guard or any other emergency response vessel in sight. In fact, the clean-up crew would not be authorized to respond until three hours later. 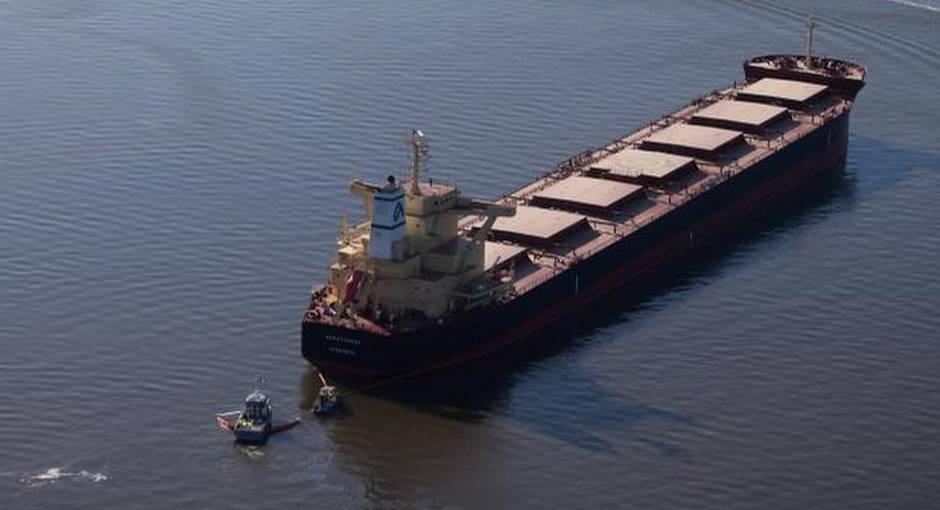 His was not the first call: The initial report came in from another sailor at 4:58 p.m., over a marine radio, which suggested the oil was leaking from the starboard stern of the Marathassa.

The two sailors aboard Odin spent the next three hours tacking back and forth near the Marathassa, waiting for the pollution control crews to arrive. They watched as a Port Metro harbour patrol boat, which set out at 5:15 to investigate multiple reports, arrived at the ship 15 to 20 minutes later, looking for the source of the thick, sticky globs of highly toxic Bunker C oil. But the two-man vessel was designed for surveillance and was not equipped to tackle any clean-up.

Around 6 p.m., Port Metro asked commercial air traffic to supply photographs to help assess the scope of the spill, and told the Canadian Coast Guard that they needed help to determine the size and nature of the spill. According to the Coast Guard, the harbour master from Port Metro reported “a minimum sheen which was unrecoverable” at 7:15 p.m.

With the light fading, Mr. Arntzena and Mr. O’Dea sailed for home just before 8 p.m. without a Coast Guard or pollution response vessel on the scene.

“All we did, we stumbled on a problem and we called the authorities and naively expected that when we were told they were on their way with an oil spill response, that we could rely on that,” Mr. O’Dea later said in an interview. “I thought we should stay out of the way.... What I’ve learned from this is, we should have screamed like hell.”

In the wake of the Marathassa spill, the federal government described a “world class” response in the placid and accessible waters of English Bay. The Coast Guard brass called it “an amazing success in oil pollution clean-up.” But others - notably the province and the City of Vancouver -- have decried the response as slow, confused and poorly managed by the lead agency, the Coast Guard.

The Coast Guard is now working on a report on its response and declined to answer many questions about just who did what, and when. However the details that have emerged so far show valuable time - particularly daylight - was lost in the early stages of the spill.

Western Canada Marine Response Corporation, the official clean up crew, was formally called to respond to “a spill of unknown origin” in English Bay at 8:06 p.m. The agency said it took just 40 minutes from that time to muster their crews and launch at least two of its ships. They found oil on the water at 9:25 on Wednesday night - around the same time the Harbour Master concluded it was in fact a large spill - and began cleanup operations.

Ten minutes after calling in the WCMRC, the Coast Guard “decided to investigate the spill directly” according to details later posted on the agency’s Twitter account. (That social media communications channel didn’t fire up about the spill until 1 p.m. on Thursday, and the agency’s posts regarding the Marathassa spill were quickly branded with the slogan “We’re on it”.)

The Coast Guard has not said when its crews arrived on the scene.

Around 10 p.m. on Wednesday, the Coast Guard said it informed the Vancouver Police Dept. of the spill. Officials from City of Vancouver say that call was simply an inquiry, and no major alarm was raised. The report of an oil spill to the city was not made until 5:06 a.m. It activated an emergency operations centre in less than an hour: At 5:50 a.m.

Western Canada Marine Response crews began to set out booms to skim the oil on the water soon after their arrival at 9:25 p.m. Although they have infared cameras designed to detect oil in the dark, they did not identify the Marathassa as the source until 4 a.m. and began to set out a containment boom around the ship at 4:30 a.m. It took an hour to complete the task. 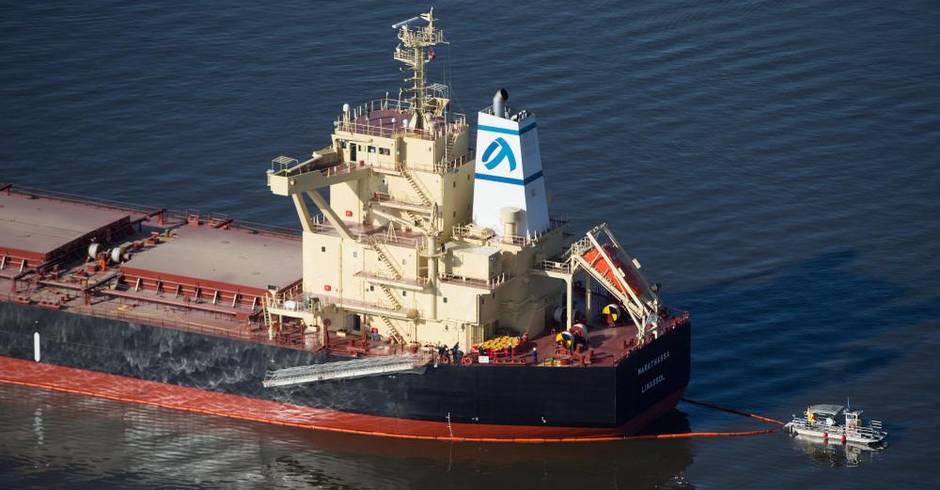 A flyover by a Transport Canada aircraft - a Twin Otter equipped for measuring oil spills - reported at 10:20 am that an estimated 2,705 litres of bunker fuel had been spilled. Beaches around English Bay, the North Shore, Stanley Park and up into Burrard Inlet as far as New Brighton Park had been fouled.

Coast Guard officials maintain they were in charge throughout, but there were signs of frustration.

Two B.C. deputy ministers in Victoria, briefed by their staff in the operations centre, decided around 10 p.m. on Thursday that they were prepared to circumvent the Coast Guard’s chain of command and direct their clean-up crews. Although that threat was not followed through on, it did appear to prompt a shift.

The Coast Guard Pacific Twitter account indicates their team did show up early on Friday. “#CCG Incident Command Post opened at 6am. We’re on it #Marathassaspill”.