Communities across British Columbia will have an easier time shutting down illegal marijuana dispensaries after the drug is legalized this summer and a provincial body is put in charge of making sure businesses comply with the new retail rules, according to the architect of Vancouver's landmark marijuana bylaw.

The province's solicitor general released details this week about how recreational cannabis will be sold in B.C. The system will be almost identical to the one for alcohol, allowing a mix of private or public stores to sell the substance – with the support of their local bureaucrats – once federal drug laws change this summer.

The system will allow those now operating illegal dispensaries – more than a hundred of which exist across the province – to apply to the provincial liquor agency for a licence. But Vancouver's 70-odd cannabis shops operating outside the city's three-year-old licensing regime are very unlikely to get the blessing from City Hall needed to proceed in the legal industry, according to Councillor Kerry Jang, point person for the governing Vision Vancouver party on the cannabis file.

"We've got provincial muscle now and there's none of this 'we're calling ourselves a protest group,' because it's legal now," he said of the enforcement regime those illegal stores will soon face. "The main thing for us is to ensure that there's a fair application process and that, when people are not in compliance, they are penalized appropriately.

"And those who are running a shop responsibly get treated like any other business and rewarded, if you like."

Vancouver has approved special business licences for 19 locations and more than 40 applicants are in the middle of trying to obtain that permission. Another 72 are flouting the bylaw despite being subject to $1,000 bylaw tickets and pending court injunctions that, Mr. Jang said, are now scheduled to start being heard in B.C. Provincial Court this September.

More than 2,600 of these fines have been issued so far, with less than one in five being paid, according to an official update Tuesday.

More than 1,000 of these fines have been issued so far, with roughly a third being paid, according to the last official update.

Across the Salish Sea in Victoria, about two dozen have been licensed by that city or are going through the application process and another 10 are operating without official permission.

Those scofflaws will be more easily brought into compliance by new provincial inspectors, who – like liquor inspectors – will have the ability to seize products, close stores and issue immediate fines that will be "substantially higher" than Vancouver's current bylaw penalties, Mr. Jang said. He is co-chair of a provincial-municipal cannabis committee meeting every two weeks to iron out the remaining rules.

Even those currently licensed by a municipal government will likely have to reapply, he said, but will still enjoy a head-start from other retailers because they have their leases in order in locations far enough away from schools or community centres.

"It's a business decision and a risk that people were willing to take because they knew in doing so they could have been arrested," Mr. Jang said of the stores that have been violating federal drug laws for years.

Travis Lane, a Vancouver Island consultant to cannabis growers and dispensaries, said he is contemplating opening two dispensaries, but is hesitant because of business concerns about a lack of legal supply in the nascent retail landscape.

"We're going to do it all perfect from the outset," said Mr. Lane, director of the non-profit B.C. Independent Cannabis Association. "The problem is … I don't know if it's a viable business yet.

"So, what, I'm going to open up an empty dispensary for the next eight months? Where am I going to get any legal product from?"

Daniel Bear, an expert in drug policy who teaches criminal justice at Toronto's Humber College, said B.C.'s measured approach of public and private retailers ensures enough government oversight while providing opportunity in a province that has long been home to Canada's largest black market for cannabis production. The mix of retail models across provinces and territories will offer an interesting case study in what works and what doesn't with regard to legalization, he added.

"We're going to have a really strong set of data – we have 13 laboratories essentially being set up," he said. "If we do this right, we'll be the model that the rest of the world follows as they inevitably either decriminalize or fully legalize cannabis."

Recreational marijuana to be sold through private, government-run stores in B.C.
February 5, 2018
B.C. plans minimum age of 19 for buying and selling marijuana
December 5, 2017 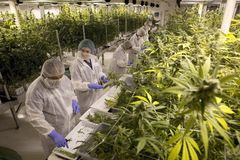 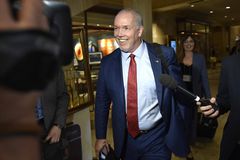