The Globe's B.C. bureau is profiling 10 young people under 20 who are doing great things in fields ranging from arts to science to activism. Today, Matreya Scarrwener recalls a lifelong love of acting that has turned into a promising career on the stage and screen.

Matreya Scarrwener was around 2 when her mother took her to her first play. Nobody can remember what the show was now, but her family will never forget this: When the toddler got home, she could recount for her father the entire plot and describe all the characters – right down to their costumes.

"She went through the whole play line by line," says her mother, Dolly Scarr, who was astonished. "She was just immersed."

Ms. Scarrwener is now 17 and she's the one delivering the lines these days – onstage and onscreen. The Vancouver student had a starring role in one of the best plays I saw in 2015, The Waiting Room, playing a (dead) girl with leukemia guiding another cancer patient through the process. On TV, she has a lead role on the Vancouver-shot U.S. cable series Ties That Bind and a list of credits that include playing Dorothy on the ABC series Once Upon a Time.

"I had a Dorothy dress and when I was 4, I would wear it every day. I was obsessed with The Wizard of Oz," says Ms. Scarrwener, sitting in the living room of her bohemian Kitsilano home. (When I arrived, her mother was decorating for the winter solstice.)

When she got the part and learned that she would be playing Dorothy (the character's identity was kept secret, even during the audition), Ms. Scarrwener was over the moon (or rainbow). "It was such a dream role. Like, my four-year-old self would be so impressed."

Ms. Scarrwener comes by her craft honestly. Her parents, Dolly Scarr and Michael Wener (thus "Scarrwener") are both in the business; Ms. Scarr is an actor well known for Tony 'n' Tina's Wedding; and Mr. Wener is a director who teaches drama at the prestigious Collingwood School. Growing up, theatre was a comfort zone – with lots of discussion about acting at home and young Matreya also spending a lot of time on her father's knee, watching various productions.

At 12, she asked her parents to get her an agent. They told her no – if she wanted to work as an actor, she would have to show the initiative and do the legwork herself. So she went online, found herself an agent and, about six auditions in, landed her first role in R.L. Stine's The Haunting Hour, playing a bratty kid who gets stuck at a haunted hotel with her family.

"I didn't know how any of it worked," says Ms. Scarrwener, who was 14 when she shot the episode. "I had no idea what I was doing and I was just kind of blissfully unaware, but I just had so much fun."

The fun part has been a key part of Ms. Scarrwener's experience, mirroring her approach to life. She is not in the least jaded and still gets giddy about being on set.

She is intensely curious and has appeared in student films and community theatre (Hecuba) – as well as paying gigs, such as the role of a sexually exploited youth in The Killing.

In 2013, she also landed her first professional theatre role in the world premiere of Armstrong's War, a two-hander at the Arts Club Theatre Company, where she played a 12-year-old Pathfinder who reads to a young soldier wounded in Afghanistan in order to earn her community service badge.

"I was kind of terrified to go onstage," she recalls. "I mean I get nervous but I don't get, like, that nervous. But before opening night I had a full-on panic attack and I've never had a panic attack before. And I think it was just because I'd looked up to this community so much and I was like, 'Wow, I've only been acting for a year-and-a-half; I don't think I'm ready to carry a two-hander at the Arts Club.' And I think I just psyched myself out. But it all went really well."

Indeed – she was nominated for a Jessie Richardson Theatre Award for outstanding performance by an actress in a lead role in the large theatre category.

The day after her 16th birthday, Ms. Scarrwener auditioned for that Dorothy role ("You've been rehearsing for this your whole life," her mother told her).

Also last year, she was cast as Robin, a teenager initially destined for the whorehouse, in the critically acclaimed feminist western series Strange Empire – but the show was cancelled by the CBC after one season.

This year, she landed the role of Mariah Olson on the UP network series Ties That Bind (which is shot in Vancouver but does not air in Canada), playing a teenager who gets sent to live with her police detective aunt after her father (Luke Perry) is sent to prison.

Then, in the fall, came the part in The Waiting Room – based on the album by John Mann of the same name about his own cancer experience. Starring in the show, her long hair (never cut!) hidden beneath a tuque, Ms. Scarrwener held off starting her final year of high school for nearly two months.

"It's been kind of hard in the past to keep the two balls in the air and school's usually the first one to drop," she says. "Sometimes there's not enough hours in the day. I don't really get stressed about it. I feel like it will all work out."

She's now in her final semester at Kitsilano Secondary School – where teachers and staff have been very supportive – and waiting to see if Ties That Bind gets a second season. She is not planning to attend university next year, but will continue to pursue her acting career.

She feels the youth-obsessed industry demands her to strike now, not just while the iron is hot but while she's young. Although she believes – and hopes – that will change for women.

"Right now, most of the roles in my life if [the industry] doesn't change are going to be in the next couple years, sadly. But I think by the time I'm old, TV and movies will have changed and women won't have to be young [to get starring roles]," she says, offering a glimpse of both her maturity and her optimism. "They'll be, like, 'Okay, women can have wrinkles on TV; women have wrinkles in real life. It's fine.'" 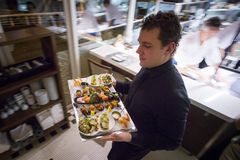