A British Columbia woman wants her conviction overturned after she was sentenced to seven months in jail for taking a 13-year-old girl to the United States to marry the leader of a polygamous church.

Gail Blackmore has filed an appeal arguing B.C. Supreme Court Justice Paul Pearlman was wrong to find her guilty and imposed a sentence that is unduly harsh and excessive.

Blackmore and her former husband, Brandon Blackmore, were found guilty in February of removing a child from Canada for a sexual purpose.

Their trial heard that the girl was taken across the border in 2004 to marry Warren Jeffs, head of the Fundamentalist Church of Jesus Christ of Latter-Day Saints, who is now serving a life sentence for assaulting two of his child brides.

In his sentencing decision, Pearlman says neither Blackmore displayed any remorse for marrying the girl to a man who was 49 years old at the time.

Blackmore's lawyer, Greg DelBigio, declined to comment on the appeal. 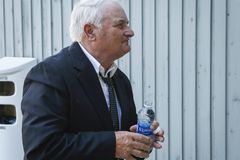 B.C. prosecutor urges ‘strong message’ in sentencing for child bride case
June 30, 2017
B.C. man found guilty of polygamy believed having multiple wives was legal, lawyer says
July 26, 2017
Report an error
Due to technical reasons, we have temporarily removed commenting from our articles. We hope to have this fixed soon. Thank you for your patience. If you are looking to give feedback on our new site, please send it along to feedback@globeandmail.com. If you want to write a letter to the editor, please forward to letters@globeandmail.com.
Comments are closed