Elaine Tanner was a pipsqueak swimmer never more fleet than when cutting through the still waters of a pool. They called her Mighty Mouse.

She was still a teenager, a toothy 17-year-old, when she took with her to the 1968 Olympics in Mexico City the hopes of a nation.

She remembers still being dripping wet from a race when a reporter first asked why she had failed.

That she had acquitted herself well, coming home with three medals against the world's best, did little to ease the pain she felt after failing to win the gold anticipated by so many of her countrymen.

In some ways, the hurt has never gone away. She has had bouts with depression and suffered an eating disorder. She titled her memoir, Off the Deep End.

These days, she is doing fine, thanks for asking, feeling fit mentally and physically.

She has also made a decision. Canada's greatest female swimmer is placing for auction her collection of memorabilia. It is a spring cleaning unlike any other.

"I should have done it four decades ago," she said Tuesday. "I know I'll have my critics and people won't understand. I'm doing it with peace. I'm excited to move on to the next chapter."

The material had been boxed in a storage locker in Ontario, where she and her husband spend part of the year. Ms. Tanner had been winnowing out clothes when she went through boxes filled with mementoes and scrapbooks. She realized the time had come to let it go.

Among the items are her first bathing suit and her Red Cross beginner's certificate; photographs with hockey star Bobby Orr, swimming sensation Mark Spitz and prime minister Pierre Trudeau; assorted books, posters, and telegrams; her uniform from the 1968 Olympics; an original Roy Peterson caricature depicting her with mouse ears; and, four framed world-record certificates from her sport's international governing body.

The greatest interest will be generated by seven Commonwealth Games medals and, especially, a bronze medal and a pair of silver medals from the Mexico Olympics.

The collection is to be listed by the auction house Classic Collectibles, which will conduct an online sale beginning May 23. The company, which is based in Delson, Que., south of Montreal, is best known for selling hockey items, most notably the collections of Rocket Richard and Jean Beliveau, as well as the Team Canada sweater worn by Paul Henderson when he scored his famous goal in 1972.

She has donated many items over the years to charity. As well, Canada's Sports Hall of Fame, into which she was inducted in 1971, at age 20, has an extensive collection of her juvenile medals, plaques and trophies.

Ms. Tanner plans to use the auction proceeds to establish herself as a counsellor offering advice in kinesiology and holistic health.

If the auction is spectacularly successful, she would also like to make donations to charities involved with homelessness and mental health.

In Christmas, 2009, Ms. Tanner and her husband, John Watt, distributed blankets and homemade cookies to people living on the streets of downtown Victoria.

"They were so polite, so grateful, so warm," she said. "They really took care of each other. There was more love among those people with nothing than in some homes of the affluent."

As a teenager, her grin and effervescent personality captured the imagination of Canadians. She returned from the 1966 Commonwealth Games in Jamaica with four gold medals, an overnight sporting sensation.

Two years later, she set an Olympic mark in the heats of the 100-metre backstroke. In the finals, she raced faster yet, only to be beaten by a half-second by Kaye Hall, of Tacoma, Wash.

The day after that, she claimed a bronze with fellow Canadian swimmers in the 400-metre freestyle relay.

Though the teenager won three of the five medals Canada took at those Games, she returned home dejected and defeated.

She retired from the pool the next year.

Ms. Tanner turned 60 in February. She still will not go in the pool, not even for a recreational splash.

It does not bother her to relinquish such prizes as her medals. She had originally stored them in her grandmother's sewing box.

She is keeping a single memento. It is an ordinary blue ribbon, the kind awarded at country fairs and elementary school competitions. She won it at age 5 while swimming with the Lanai Club in Sunnyvale, Calif.

"I wanted that blue ribbon so badly," she said. "That was the seed of my dream."

That little blue ribbon took her all around the globe and into the pool against the world's best. Ms. Tanner no longer has need of her medals as keepsakes. The ribbon is staying because it represents the joy she once felt for her sport. 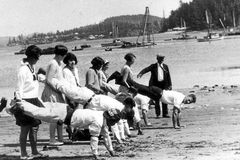 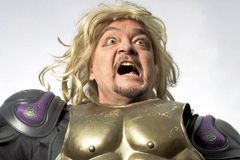