The Fraser River is experiencing one of the biggest salmon disasters in recent history with more than nine million sockeye vanishing.

Aboriginal fish racks are empty, commercial boats worth millions of dollars are tied to the docks and sport anglers are being told to release any sockeye they catch while fishing for still healthy runs of Chinook.

Between 10.6 million and 13 million sockeye were expected to return to the Fraser this summer. But the official count is now just 1.7 million, according to the Department of Fisheries and Oceans.

Where the nine to 11 million missing fish went remains a mystery.

"It's beyond a crisis with these latest numbers," said Ernie Crey, fisheries adviser to the Sto:lo tribes on the Fraser. "What it means is that a lot of impoverished natives are going to be without salmon. … We have families with little or no income that were depending on these fish. … It's a catastrophe," he said.

The sockeye collapse is startling because until just a few weeks ago it seemed the Fraser was headed for a good return.

In 2005 nearly nine million sockeye spawned in the Fraser system, producing a record number of smolts, which in 2007, began to migrate out of the lakes where they'd reared for two years. Biologists for the DFO were buoyed by the numbers - the Chilko and Quesnel tributaries alone produced 130 million smolts - and because the young fish were bigger than any on record.

Those fish were expected to return to the Fraser this summer in large numbers, and those projections held until a few weeks ago when test fishing results began to signal a problem.

Barry Rosenberger, DFO area director for the Interior, said test nets at sea got consistently low catches, then samples in the river confirmed the worst - the sockeye just weren't there in any numbers.

There had been some hope the fish - which return in five distinct groups, or runs - might be delayed at sea, but Mr. Rosenberger dismissed that possibility.

"There are people hanging on to hope … but the reality is … all indications are that none of these runs are late," he said.

Mr. Rosenberger said officials don't know where or why the salmon vanished - but they apparently died at some point during migration.

"We've been pondering this and I think a lot of people are focusing on the immediate period of entry into the Strait of Georgia and asking what on earth could have happened to them," said Dr. Brian Riddell, President of the Pacific Salmon Foundation. "What we're seeing now is very, very unexpected."

Some are pointing accusing fingers at salmon farms, as a possible suspect, because of research that showed young sockeye, known as smolts, got infested with sea lice as they swam north from the Fraser, through the Strait of Georgia.

"This has got to be one of the worst returns we've ever seen on the Fraser. … It's shocking really," said Craig Orr, of Watershed Watch.

Dr. Riddell said sea lice infestations are a possible factor, but it is "extremely unlikely" that could account for the entire collapse.

"We have had the farms there for many years and we have not seen it related to the rates of survival on Fraser sockeye [before]" he said.

Dr. Riddell said a sockeye smolt with sea lice, however, might grow weak and become easy prey or succumb to environmental conditions it might otherwise survive.

Alexandra Morton, who several years ago correctly predicted a collapse of pink salmon runs in the Broughton Archipelago because of sea lice infestations, in March warned the same thing could happen to Fraser sockeye.

She said researchers used genetic analyses to show Fraser sockeye smolts were getting infested with sea lice in Georgia Strait.

"I looked at about 350 of this generation of Fraser sockeye when they went to sea in 2007 and they had up to 28 sea lice [each] The sea lice were all young lice, which means they got them in the vicinity of where we were sampling, which was near the fish farms in the Discovery Islands. If they got sea lice from the farms, they were also exposed to whatever other pathogens were happening on the fish farms (viruses and bacteria), " said Ms. Morton in an e-mail.

"There's a lot of different beliefs as to why the fish haven't shown up, but I think it's pretty clear where there are no fish farms salmon are doing well," said Brian McKinley, a guide and owner of Silversides Fishing Adventure.

"It's pretty frustrating to watch what is happening," he said from his boat, anchored on the river near Mission. "I remember sockeye would just boil through here in August and September. It was insane. . .now the river seems dead."

Dan Gerak, who runs Pitt River Lodge, said there is an environmental crisis on the river.

"Definitely something's got to be done - or it's finished forever," he said of the Fraser's famed salmon run.

Other big runs of salmon are expected to return this year - notably pinks where are projected to number 17 million - but it is too early to tell if the sockeye collapse will be repeated with other species. 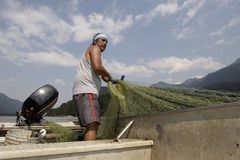 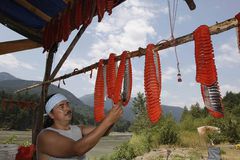