After studying cetaceans for decades and spending thousands of hours scanning the horizon, John Ford had pretty much given up hope of seeing a rare North Pacific right whale.

The species, thought to be down to only about 100 animals, has been teetering on the brink of extinction since commercial whalers devastated the population in the 1800s. The last recorded sighting of a right whale in British Columbia waters was 62 years ago, in 1951, four years before Dr. Ford was born.

But Dr. Ford got his chance recently, when Fisheries and Oceans Canada biologist James Pilkington called to say he had spotted a right whale feeding leisurely eight nautical miles (15 kilometres) off the northwest coast of Haida Gwaii – in the middle of a whale hot spot the small team was then surveying.

"I was elated. It's something we'd always hoped to see out there, but really didn't think realistically it would ever happen," Dr. Ford said in an interview Thursday. "I was just thrilled that James had found it … Then we went looking for it [too] – and it was better than anything I'd have ever believed possible."

Mr. Pilkington had the encounter while cruising on the Canadian Coast Guard vessel Arrow Post. At the time, he wasn't far from where Dr. Ford was also searching the waters with another renowned DFO whale expert, Graeme Ellis.

At first, Dr. Ford thought Mr. Pilkington's sighting was just a fleeting glimpse of what may be the rarest whale in the world – the equivalent of looking at the sky just as a meteor falls.

But the next day, Mr. Pilkington, who in a statement said he was "in a state of disbelief," found the whale again – and Dr. Ford and Mr. Ellis scrambled to join him.

"We managed to get on the ship … and we went down and found it for the third day. We spent seven hours observing it feeding," said Dr. Ford, who began studying whales on Canada's West Coast in the 1970s.

In the past decade, his research team has done more than 50,000 kilometres of whale surveys without – until now – ever spying a North Pacific right whale.

"In the back of our mind we were always hoping for a miracle," Dr. Ford said.

He said the area off Haida Gwaii is rich in nutrients that bring all manner of cetaceans in to feed. Commercial whalers worked through the area in the 1800s, reducing the right whale population in the North Pacific from an estimated 11,000 to several hundred over about a decade.

"If we were ever going to see one, this was the area … but the probability in our minds was infinitesimally small and that's why it was such a shock to actually find one," said Dr. Ford, who is head of the cetacean research program at DFO's Pacific Biological Station in Nanaimo.

"What's great about this sighting is that it confirms the species still exists in Canadian waters, because that's been an open question. And it gives us some glimmer of hope that maybe there's more out there," he said.

"We are all excited about this. It's a big deal," said Dr. Phillip Clapham, who directs whale research for the Alaska Fisheries Science Center in Seattle.

He said the North Pacific right whale was showing signs of recovery in the 1960s when illegal whaling by Russian ships killed 600 animals, driving the population down to about where it is today.

"It is probably the most endangered population of whales in the world," said Dr. Clapham. 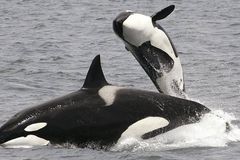 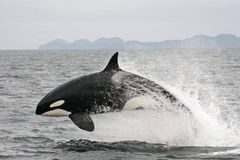 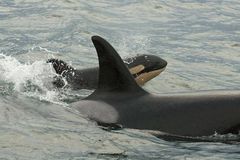 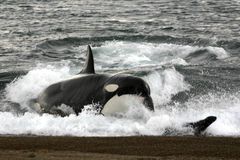