Pet detectives investigating the supposed theft of six dogs from a Langley park say they knew from the beginning there was something off about the dog walker's story.

Emma Paulsen, who was responsible for the care of six dogs, including her own, had told police she secured the dogs in the back of her pickup truck at an off-leash park in Brookswood last Tuesday. She then went to a bathroom and, when she returned 10 minutes later, all six dogs were gone, she said.

"From the get-go, the story didn't make a whole lot of sense," said Alesha MacLellan, co-owner of Petsearchers Canada, a pet detective hired by the dogs' desperate owners. "The washrooms were in sight of where the truck was parked. I'm trying to grasp how someone could so quickly retrieve six dogs that they do not know and get them into another vehicle without anyone seeing. It seemed far-fetched."

There was also the fact that Ms. Paulsen rarely, if ever, brought the dogs out to Langley, about a half-hour drive from Ladner, where all of the other dog owners reside.

As well, the timeline of when the dogs were stolen, and when the owners were notified, didn't seem consistent with what the experienced detectives would typically expect in such a scenario, Ms. MacLellan said. Dogs 2

Authorities have since confirmed that all six dogs died of heatstroke in Ms. Paulsen's vehicle while it was parked at a business in Richmond. Ms. MacLellan's husband Al, who had a "heart to heart" talk with the dog walker on Monday, said she went into a "blind panic at the thought of notifying the families and the possible repercussions" and crafted her story "in a complete state of shock and panic."

On Monday night, the B.C. SPCA – which is now leading the investigation – retrieved the dogs' bodies from a "ditch-like area" in Abbotsford. They have since been taken to a lab in the Lower Mainland, where necropsies will be performed.

"The necropsies will give us all of the physical evidence on exactly what happened to the animals: how they died, how long they took to die, that kind of thing," said B.C. SPCA spokeswoman Lorie Chortyk. "We're hoping they will get back to us within a week."

Eric Ortner, whose young black-and-white Boston terrier Buddy was one of the six, called the ordeal "an absolute nightmare" and said he and his wife are "past the point of forgiveness."

"She sent us on this wild goose chase, running all over the Lower Mainland, spending hundreds of dollars on posters and thousands of dollars on investigators," Mr. Ortner said. "She could have just said, 'I screwed up, guys. Your dogs are dead. I'm so sorry.'"

The couple had used Ms. Paulsen's dog-walking services for nearly two years, paying about $300 a month for a one-hour walk each weekday, Mr. Ortner said. He is now second-guessing little things he had previously dismissed, like the fact that Buddy had recently been defecating in the house quite often.

"We thought maybe he was mad at us … for going to work or something," he said. "But now that we understand what has potentially been happening, it makes a lot of sense, if he's been sitting in the back of a truck, not getting a proper walk."

Meanwhile, the B.C. SPCA is again reminding dog owners of how deadly it can be to leave their pets in warm vehicles.

"Dogs don't have sweat glands as people do, so in vehicles they just don't stand a chance," Ms. Chortyk said. "It can take less than 10 minutes for a dog to suffer brain damage, or die."

She emphasized that measures like parking in the shade, cracking the window and providing water simply aren't enough to guarantee safety. "We always urge people: If you love your pets, leave them at home while you're running errands, unless you can be with them all of the time."

A dog-leash entrepreneur’s royal benefactor
May 18, 2014 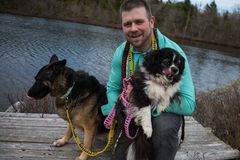 Thanks to one B.C. Mountie, these seven puppies will be strays no longer
June 7, 2013 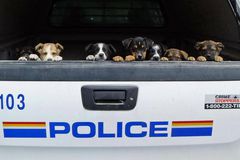