Angel Wolfe raced through her remarks at the Pickton inquiry, managing to say most of what she wanted about her mother without any trouble.

But as the 18-year-old read a poem about the struggles in her life, Angel could no longer hold back the tears. She choked up as she talked about how she used to blame herself all the time and "the secret place" where her mother lay.

Angel was six years old when her mother, Brenda Wolfe, vanished from Vancouver's Downtown Eastside in 1999, she told the Missing Women inquiry Thursday in an emotional presentation that had many people in the public gallery wiping their eyes.

Angel, who grew up in a foster home, was eight years old when she was told that her mother was dead. She recounted the uncomfortable scene when police came to tell her in 2002 that investigators had possibly found evidence related to her mother on Mr. Pickton's pig farm. They asked her several questions. "To me, it felt like an interrogation," she told the inquiry.

She recalled that she could not concentrate on what she was being told. She was "so zoned out," thinking mostly about the silver tape recorder that the police had placed in front of her. She did not believe what the officers were telling her. "In my mind, as a little girl, I still thought I [would find]my mom one day," she said.

The media "really went nuts with the case," she said, "and I was not ready for the grotesque details." She grew to hate her mother "for no reason" as a result of what was in the media.

It wasn't long before her friends found out what had happened to her mother. "All my friends' moms started reading the papers," Angel said. "You would be amazed how many mothers did not want their children hanging out with me any more. My friends were telling me I lied to them about my whole life."

The media identified Mr. Pickton's victims as drug-addicted sex workers, Angel said. But she saw them as survivors. When she looked at the Missing Women Joint Task Force poster of the women, she saw "hurt families, other people's mothers, sisters, aunties and friends."

She had so many questions about where she was from and what had happened. She kept a book of every newspaper article from the pre-trial hearings and trial. "Finally I burned the book, for my own healing. But something in me needed to know everything before I could let go."

In the summer of 2010, the task force told her about the evidence they had related to her mother. She was shown photographs of the farm and the crime scene. She was also offered $10,000 from the province's victim compensation fund.

"That is nothing. My mom will never be there to see me graduate, to walk me down the aisle or to stand beside me when I give birth. For them to put a price on my mommy hurts me," she said.

She offered several suggestions to the commission, including more treatment centres for addicts and the addition of aboriginal and community representatives on the Vancouver Police Board.

Earlier, a sister of another woman linked to the Pickton farm told the inquiry that she could not accept an apology from the Vancouver Police Department. Dawn Crey disappeared from the Downtown Eastside a few years before Mr. Pickton was arrested.

"It will take me time to forgive the Vancouver police," Lorraine Crey told the inquiry. Outside the hearing, she questioned the sincerity of the apology. "Sorry is so simple to say to me. They only do it because they have to," she said in an interview.

The government-appointed inquiry, headed by Wally Oppal, heard submissions this week from the families of seven women who vanished from the Downtown Eastside in the years before Mr. Pickton was arrested. Although convicted of six murders, police believe he is responsible for 33. Mr. Pickton once said he killed 49 women. Details of errors made at cremation rattle victims' families at Pickton probe
October 24, 2011 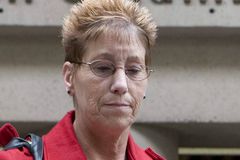