Alison Azer's four children were legally allowed to travel to France and Germany earlier this month, but they did not return as scheduled last week.

Instead, an RCMP officer knocked on her Comox Valley door at 4:30 a.m. on Aug. 22, she said Thursday.

"I fell, my knees buckled, I couldn't see," she said. "I had to be held. And that's when the dark, dark part of this nightmare began."

A Canada-wide warrant for Saren Azer, who is also known as Salahaddin Mahmudi-Azer, was issued Monday for abduction in contravention of a custody order.

Policing agency Interpol lists the children – Sharvahn, 11, Rojevahn, 9, Dersim, 7, and Meitan, 3 – as missing on its website.

Mr. Azer is a well-known internist from the Comox Valley and has spoken publicly about volunteering medical care to refugees in the Middle East.

David Talbot said he worked with the doctor, supporting Syrian refugees, and his friend loves his family.

"I've only seen a man with a big heart, and that includes loving his kids," said Mr. Talbot.

In February, Mr. Azer was part of a delegation that met with then defence minister Jason Kenney to advocate for more humanitarian assistance in Syria.

Mr. Kenney tweeted a photo of the pair shaking hands in March, with a caption that said Mr. Azer was "doing tremendous work" to get medical help for Iraqi refugees.

The couple separated more than three years ago and the relationship has been "very acrimonious" ever since, said Ms. Azer, noting they always communicated through lawyers or a parenting co-ordinator.

Mr. Talbot said the marriage breakup was hard on his friend who had "been working very hard to be a good father."

"This is not a kidnapper," he said. "This is somebody who worked and spent a lot of money with lawyers."

Ms. Azer said she's been concerned for a long time that he would take their children and believes they may be in northern Iraq. She said she has faith in the RCMP and international police.

An online fundraising campaign has raised nearly $38,000 to help pay any costs related to finding the kids and bringing them home, and she said any extra money will be donated to an organization that would help prevent another family from going through a similar situation.

"I just feel so, so heartbroken that even with all the efforts, he still got them out of the country and they are somewhere scared and confused," Ms. Azer says.

"We live in a world where I don't know where you'll hide with four kids who will be absolutely desperate to get home to their mama, to their grandparents, to their best friends." Facebook Canada to send Amber Alerts to nearby users
May 25, 2015 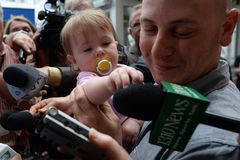 Body of infant abducted from California home found, police say
January 5, 2015
Report an error
Due to technical reasons, we have temporarily removed commenting from our articles. We hope to have this fixed soon. Thank you for your patience. If you are looking to give feedback on our new site, please send it along to feedback@globeandmail.com. If you want to write a letter to the editor, please forward to letters@globeandmail.com.
Comments are closed