A monumental copper, silver and gold vase crafted in the U.S. more than a hundred years ago – but with a strong connection to British Columbia – is in the province for the first time.

The Ptarmigan Vase, created by a star Tiffany & Co. designer out of metals extracted from a B.C. mine and purchased at auction by the National Gallery of Canada five years ago, will be exhibited at the Audain Art Museum in Whistler for three years, beginning Wednesday.

"We don't have anything else like it in the building," says the museum's executive director Suzanne Greening. "It's another aspect of creativity in B.C."

The ornate, 112-year-old, 63.5-centimetre-high vase was the brainchild of George Paulding Farnham, head jewellery designer for Tiffany & Co in New York from 1891 until 1908, and acclaimed for his work with precious metals. It was not, however, a Tiffany vase – but an intensely personal project emerging from Mr. Farnham's connection with B.C.

Mr. Farnham had invested heavily in the Ptarmigan Mine in southeastern B.C. – a mine rich in copper, gold and silver – and purchased a property in Windermere, B.C. A prominent, 3,493-metre peak in the Selkirk Mountain range was renamed for him – Mount Farnham. Nearby is Paulding Creek, also named for the New Yorker.

The venture would ultimately prove to be his financial undoing – and also contributed to the end of his marriage, due to his long absences from home as he spent more money and time in B.C.

But before that, when Mr. Farnham had the means, the connections – and the enthusiasm – he conceived of the vase project.

A one-tonne block of precious metal was excavated from the mine and sent to the U.S., where Mr. Farnham oversaw the work of five master craftsmen; their names appear on the underside of the vase. Sotheby's, in a catalogue note, explains that while the vase does not bear the Tiffany mark, the complexity of the work would have required it to have been made in the Tiffany factory in New Jersey.

Two vases were constructed from the material at around the same time, it's believed. One was given to Mr. Farnham's wife, Sally. The other was sold to one of his leading patrons, Edward Dean Adams – an industrial financier and art collector.

The vases, nearly identical, employ B.C. iconography, and the influence of First Nations is evident in both decorative elements and their shape – meant to evoke the basketry and pottery of native Canadians in that area. The sides are engraved with figures including an eagle and a stylized mask.

"It's really visionary – talking about First Nations in, what, 1904," says René Villeneuve, the NGC's associate curator of Early Canadian Art. "It's quite extraordinary."

The gold seal on the front bears the B.C. coat of arms adopted in 1895. The Latin cross beneath is a surveying symbol that indicates the latitude and longitude of the mine and Mount Farnham. A ptarmigan – a species of grouse found in the area – is perched atop the vase.

It was made using a technique called Mokume – which involves employing layers of contrasting metals to produce a veined surface resembling wood grain. The vase was made from bonding 18 layers of metal – copper and silver.

"Mokume is a very, very demanding technique," says Mr. Villeneuve. "Sometimes, people do rings and small objects, but you never ever see pieces of that size."

The vase that is now in Whistler was sold at Sotheby's in New York in January of 2011 to the NGC (with funding assistance from the Department of Canadian Heritage) for $662,500 (U.S.) – far above the original estimate of $80,000 to $120,000. The second vase subsequently resurfaced – along with a previously unknown illustrated book detailing how Mr. Farnham created the vases. Mr. Villeneuve says the vase now in Whistler, on loan from the NGC, is in better condition than the second vase; it stayed in the Farnham family and is not believed to have been publicly displayed before the NGC bought it at auction and subsequently exhibited it in Ottawa.

"It's a fantastic piece," says Mr. Villeneuve, who has called it a masterpiece. He adds that British Columbians deserve to have access to it. "All the metals have been extracted from a mine in B.C. and then all the themes, all the iconography refer to B.C. – so it's 100-per-cent B.C."

Audain Art Museum is an urban cultural statement that stands out
March 11, 2016 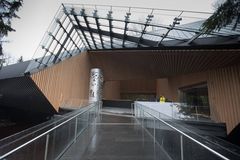 On the cusp of opening, the Audain Art Museum tells the story of British Columbia
March 10, 2016 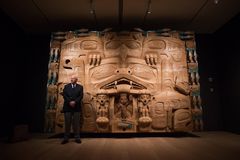