B.C.'s Liberal government says it is happy with how its foreign-buyers tax has helped cool Metro Vancouver's real estate sector and could expand it to battle rising prices in the suburbs east and north of Vancouver and Victoria.

The sky-high cost of housing is expected to be a central theme in the provincial election that's less than three months away, but Tuesday's provincial budget provided almost nothing new to make homes more affordable.

Finance Minister Mike de Jong noted Tuesday that the 15-per-cent extra levy for international buyers in and around Vancouver has softened the market there and stopped the spike in prices. Now, the government is monitoring the extra pressure these buyers are putting on communities across the province, he said. The tax could be expanded to target the eastern Fraser Valley as well as Squamish and Victoria.

What you need to know about B.C.'s latest budget

But he added there is more work to do.

"We have taken some very concrete steps to try to address affordability," Mr. de Jong told reporters before addressing the legislature. "Where I don't think we have done enough work collectively is on the supply side."

After British Columbia introduced the levy on foreign buyers last August, the percentage of foreign buyers dropped from pre-tax average of 13 per cent down to 4 per cent in December.

Mr. de Jong also said he'd be open to approving a vacancy tax, similar to Vancouver's, if any other community was interested, but he said the province has received no requests. Last summer, the province changed legislation to allow the City of Vancouver to levy a 1-per-cent tax on owners of properties that are not lived in by the owner full time or rented out at least six months of the year. The tax takes effect next year.

The only new housing measure announced in the budget was raising the threshold on a property-transfer tax exemption for first-time buyers to $500,000 from $475,000.

To make housing more affordable for local residents, the province will continue to meet with civic politicians to work toward increasing the density of B.C.'s cities and clearing permitting backlogs, Mr. de Jong said.

Kishone Roy, chief executive officer of the B.C. Non-Profit Housing Association, said little in the budget offers new help to the province's more than 520,000 renters – many of whom dream of owning.

"[Home ownership] is getting further and further out of reach," he said. "As rents go up, renters have less and less money they can save for that down payment."

Late last year, the province announced a new interest-free loan program for first-time home buyers to secure a down payment on a property worth up to $750,000. In the first four weeks of the program, ending earlier this month, a little more than 515 applications were received, far below the rate needed to reach the 42,000 buyers the province wants to help over the next three years.

Genesis Rigor and her fiancé, Matthew Castillo, applied to the loan program after their offer on a two-bedroom, two-bathroom Richmond condo was recently accepted for roughly $475,000.

Ms. Rigor, a nurse, and Mr. Castillo, an architectural technologist, said that the market may have cooled, but getting a home is still a competitive and stressful process.

"It's kind of deceiving what the price of the place is actually worth: We've seen a few places marked within our price range, but the market value is way over our budget," Ms. Rigor said.

B.C. promises to cut health premiums in half with pre-election budget
February 21, 2017 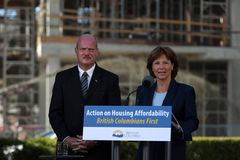 British Columbia issues warning on U.S. protectionism
February 21, 2017
Follow Mike Hager on Twitter @MikePHager
Report an error
Due to technical reasons, we have temporarily removed commenting from our articles. We hope to have this fixed soon. Thank you for your patience. If you are looking to give feedback on our new site, please send it along to feedback@globeandmail.com. If you want to write a letter to the editor, please forward to letters@globeandmail.com.
Comments