They have been seen peeping into the windows of high-rise apartments, crashing into crowds at large events and flying dangerously close to other, much larger, aircraft.

Over the past three years, the number of incidents involving recreational drones in Canada has more than tripled to 148 reported problems last year, prompting Ottawa to bring in strict new guidelines and penalties for the pilots last week. Under the new rules, all drone hobbyists must clearly mark their contact information on the aircraft and refrain from flying the vehicles at night or within nine kilometres of any airport or seaplane base. They must also be kept at least 75 metres away from buildings, people or other vehicles and fly no higher than 90 metres.

That means coastal cities such as Vancouver and Victoria are virtually off-limits for these drones.

Anyone caught violating these rules could face fines of up to $3,000.

One group of roughly 12,000 enthusiasts, however, is not subject to these new guidelines: the Model Aeronautics Association of Canada.

Rodger Williams, the association's president, has been flying model planes of one sort or another since he was a five-year-old – about 69 years ago. A recent convert to the drone trend, Mr. Williams, over the phone from his home in Quebec City, described the evolution of the hobby and what enthusiasts are making of the new rules.

Why are these new rules coming in now?

Because of the explosion of all of the stuff being sold everywhere. You could go to Costco, you could go anywhere and buy them. People don't understand the dangers, they just go out and try it out – it's fun.

What did you think when you first saw one flying seven or eight years ago?

I thought "Geez, that looks interesting." However it may not be that interesting after about a week because it just goes up and sits there and goes back down again. But, then you add a camera to it and it becomes a whole lot more interesting because then you can sit in the cockpit as if you're flying a real airplane, which I do have my licence for.

When did people first taking things too far in your mind?

It wasn't too long after that the stigma caught on, but it really has gotten quite a bit worse the last three or four years when all of the well-designed quads have come out and they are fully loaded with first-person-view cameras.

They are useful for a lot of things especially for traffic control, for accident investigation, fires and crowd control. This kind of stuff is all good. There's a lot of good that's come out of this, it's just that the average guy can go out and get one and may not have any thought to the safety aspect of it, which has to be number one, as far as we're concerned.

Does your community of long-standing "modellers" look down on drone operators as less sophisticated and more reckless?

Baby boomers are a big part of the growing society of drones [operators] and they're just having a riot with it. They have the time and the money to devote to it.

How do you have fun with your three drones?

I like to fly indoor. At gymnasiums and all kinds of stuff like that. You have no wind issues, no weather. Right now, I've had 50-some-odd centimetres of snow in the last few days, you're not going outside to fly. Summer is a different issue, of course. 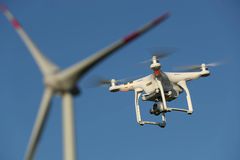 TSB probes near miss between Porter plane and possible drone near Toronto’s island airport
November 14, 2016
Follow Mike Hager on Twitter @MikePHager
Report an error Editorial code of conduct
Due to technical reasons, we have temporarily removed commenting from our articles. We hope to have this fixed soon. Thank you for your patience. If you are looking to give feedback on our new site, please send it along to feedback@globeandmail.com. If you want to write a letter to the editor, please forward to letters@globeandmail.com.
Comments