It was the perfect Hollywood ending to a guns-drawn pursuit of a cougar bounding across backyards, over fences and through garages in a downtown Victoria neighbourhood steps from British Columbia's legislature.

Dozens of residents peered over fences or stood on balconies watching the drama as police and conservation officers with dogs ran through alleys and along sidewalks with their pistols drawn as noisy crows led the chase from the sky.

Relieved neighbours and bystanders clapped and cheered after one shot from a tranquilizer rifle immobilized the big cat Monday morning.

About a half dozen officers surrounded the cougar as it lay on the grass with a dart in its side, its chest heaving, before it was lifted into the back of a pickup truck and placed in a steel barrel.

"I was hoping they wouldn't kill it," said Sonja Edwards, who lives in the James Bay neighbourhood where the cougar was on the loose.

"We decided to tranquilize it because we had a chance to," said conservation officer Peter Pauwels.

He said he expected the cougar to wake up in a few hours when it would be released back into the wild Monday evening.

"I'm going to try and take it as far away from human civilization as I can get on southern Vancouver Island."

Pauwels downplayed the intensity of the hunt and the potential danger that the wild, cornered cat posed to the neighbourhood, which includes an elementary school and seniors' facilities.

The pursuit was anything but quiet as police sirens wailed, tracking dogs howled and crows screeched from above.

Two Layser panting hounds named Jim and Phoebe, their noses to the ground, had the cat's scent and were just steps behind the cougar.

They followed it across a parking lot and into a yard on Michigan Street, but the cat spun around, leapt about two metres into the air and ran past a group of reporters and photographers who were part of the chase.

A police officer screamed, "Look out," as the cougar charged out of a parking lot.

A resident named Tim Van Alstine said he planned to take a photo of the large cougar but when he saw it run out into the street, he realized he was in danger.

"When I saw the size of the cat, I said, 'It's time to get out, like get away quick,' and I did," he said. "I just forgot the picture. I just took off. I started running backwards. Big. Big. Much bigger than anticipated."

Opposition New Democrat MLA Carole James, who represents the Victoria-Beacon Hill riding where the cougar was roaming, said her husband took photos of the animal running through their backyard.

Pauwels said he suspects the cougar has been in the Victoria area for a about a week, based on recent reports of cougar sightings in nearby Oak Bay.

He said cougars sometimes leave the wilderness areas that surround Victoria and end up lost in the urban zone, unable to find their way out.

"Cougars, when they get into these areas, they're scared and they are trying to find a way out. I don't think this thing was ever inclined to attack anybody."

Cougars are not strangers to James Bay and Victoria's downtown area.

In 1992, a cougar was spotted on the grounds of the Fairmont Empress Hotel, where it was tranquilized in the hotel's underground parking lot.

Six years later, a cougar walked into a business in James Bay, where an employee locked the animal in a room until conservation officers arrived and tranquilize it.

Vancouver Island is believed to be home to up to 800 cougars. 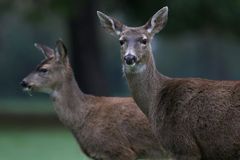 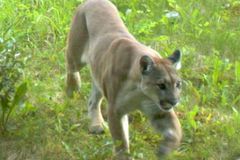