The number of homeless people in Vancouver is the highest in a decade, underscoring an affordability crunch that has worsened even as the local government has spent millions on new housing.

Vancouver recorded 1,847 people without permanent housing during its annual homeless count in March – a 6-per-cent increase from a year earlier – in a city whose mayor came to office promising to end homelessness by the end of 2015.

In releasing the tally on Tuesday, the city highlighted steps it had taken in recent years to build new homes and protect affordable housing, including changing its bylaws to make it more difficult for the owners of single-room occupancy hotels to evict low-income tenants.

But critics say those measures aren't enough, especially when skyrocketing real estate prices make it tempting for building owners to evict tenants so they can sell or redevelop their properties.

"We are not surprised by the numbers. What we are seeing in the Downtown Eastside – and it is happening across [Metro Vancouver] – is the loss of low-income housing," Maria Wallstam, a spokeswoman for Carnegie Community Action Project, said Tuesday after the city released its report.

"The existing low-income housing stock is being demolished, the rents are going up, or it's being developed," she added. "There are simply no options for people to live."

The homeless count, conducted over two nights in March, found 1,847 people who were homeless, compared with 1,746 in 2015. The total comprises less than 1 per cent of Vancouver's population – 603,500 in the 2011 census – but is slightly higher than the level in several other Canadian cities, including Toronto and Saskatoon, the report said.

The count showed that 61 per cent had been homeless for less than a year and 78 per cent were facing at least one physical or mental-health concern, or both.

"What jumps out at me is the complexity of the issues behind these numbers," said Jonathan Oldman, executive director of the Bloom Group, a non-profit organization that provides housing and support services in the Downtown Eastside.

A more comprehensive response toward mental health and addiction issues could prevent some people from becoming homeless and help those who have been chronically homeless for years or decades to become more stable, he added.

During his successful campaign for mayor in 2008, Gregor Robertson made a high-profile pledge to end street homelessness by 2015.

In a statement, Mr. Robertson called the results of the homeless count disappointing. But he said the city has done more than its share when it comes to tackling the issue, and he called on the provincial and federal governments to help build more housing.

There are more than 4,000 people on B.C. Housing's waiting list for social housing in Vancouver and 9,500 across Metro Vancouver, the statement said.

Although the city has built hundreds of new social and supportive housing units since 2012, a relatively small percentage of those – less than 6 per cent, according to CCAP research – will rent at the "shelter rate": the $375 a month available through social assistance, Ms. Wallstam said.

"What we are seeing is that the new social housing is not going to the people who are at most risk of homelessness, which are people on welfare," she said.

Calum Scott, director of youth services at Family Services Greater Vancouver, said he would like the city to develop a youth housing strategy, adding that many of the young people he encounters have become homeless as a result of "aging out" of government care when they turn 19.

"Housing youth is very different than housing adults, and there is no separate strategy at this point," Mr. Scott said.

Last winter, Family Services ran a temporary homeless shelter funded by the provincial government for youth 19 to 24. The 10-bed shelter was full most nights, with many clients saying they would not stay at a conventional shelter because of safety concerns.

"We had a number of youth who stayed with us who just absolutely wouldn't stay at any other shelter because they didn't feel safe there," Mr. Scott said. 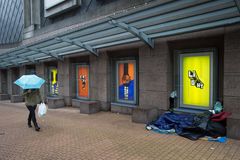 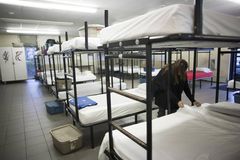 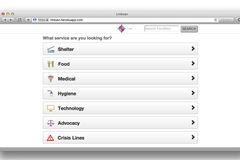